Many Windows users don’t really understand this concept for this feature has never been present in Windows before. In case you don’t know, a “virtual desktop” is like a clone of the desktop you have but completely empty. In other words, you’ll have two desktops. This feature is extremely useful for it prevents you from being overwhelmed by a large amount of windows. You can keep a desktop simply for entertainment and another one just for work related stuff for example.

This free virtual desktop manager is strongly suggested for those who can’t organize their desktops or usually like to open many windows at the same time. Virtual Dimension also has many other interesting functions that should really help one to organize his/her life. Another free software that lets you add virtual desktops to Windows is VirtuaWin. 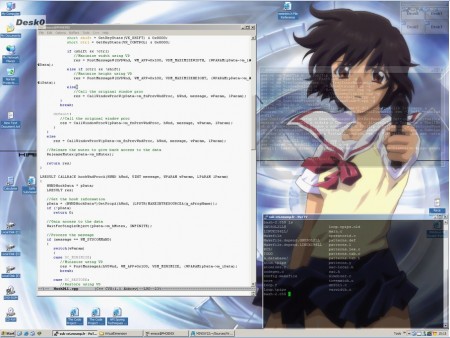 How to Use Virtual Dimension:

Using Virtual Dimension as a free virtual desktop manager is quite simple. After downloading and installing the software properly, launch it and you should see a little window on your desktop which should say “Desk 0”. Desk 0 is your current desktop: the default one.

In order to create a new desktop just go to the programs icon in your system tray, right click and go to “Configure”. On the settings window there should be several tabs go to the “Desktops” tab and click on “Insert”. After doing that a new window should show up next to “Desk 0” which should say “Desk 1” by clicking on it you should go to another desktop with no open windows.

Virtual Dimension is by no means the only software of its kind. Desktops allows you to create up to four virtual desktops and GiMeSpace provides the functionality to let you extend your desktop horizontally across monitors to reduce clutter.