This article talks about 5 best video to GIF converter software for Windows 10. If there’s one image format that can be considered to be the most shared online, it has to be animated GIF. From funny memes to viral quotes, the web is full of endless GIFs. In fact, its popularity has led to the emergence of image sharing services such as IMGUR, which are dedicated primarily towards sharing GIFs. But what if I told you that you can convert any video (perhaps, an interesting scene from your favorite movie) to an animated GIF? That’d be great, right?

As it turns out, you can, and there are plenty of applications out there to help you with the same. These programs not only let you convert videos to animated GIFs, but also include features like frame editing, effects, web-upload optimization, and much more. Intrigued? Let’s find out more about 5 best video to GIF converter software for Windows 10. 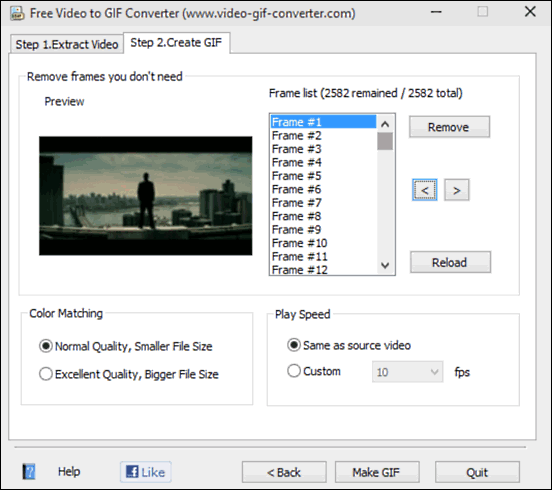 I guess the name should pretty much make it clear, as Free Video To GIF Converter is exactly what it says on the box. The lightweight application lets you convert just about any video to an animated GIF in a matter of seconds. It supports nearly all popular video file formats, such as AVI, MP4, 3GP, WMV and VOB. GIF creation is essentially a two step process. To start off, all you have to do is import the video into the application. Once it’s loaded, specify options such as target resolution, time-markers for extracting the frames etc., and hit Next. At the second step, you can view/delete individual frames, and configure settings such as play speed and output quality. When done, click the Make GIF button, and Free Video To GIF Converter will handle the rest. Click here to read more. 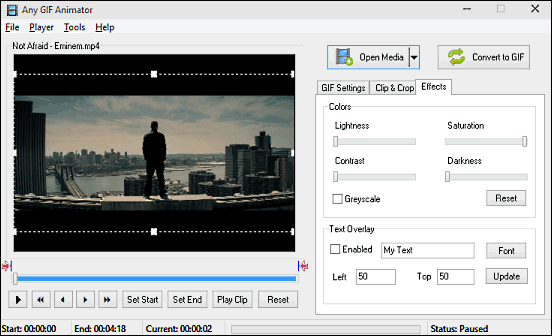 Simple and straightforward yet powerful, Any GIF Animator makes quick work of turning videos into animated GIFs. Thanks to the built-in codec pack its installer comes with, Any GIF Animator supports a huge variety of video file formats, including AVI, FLV, MPG, ASF and WEBM. And that’s not all. You can also import videos from optical media such as DVDs, and even record them directly from webcams. To begin, import the video (after selecting the source) and use the embedded preview player on the left to set start and end time markers. The same screen also lets you specify advanced GIF options such as frame rate, resolution, looping, and dithering method to be used. Heck, you can even add effects and text overlays. Once everything is done, click the Convert to GIF button. Know more here. 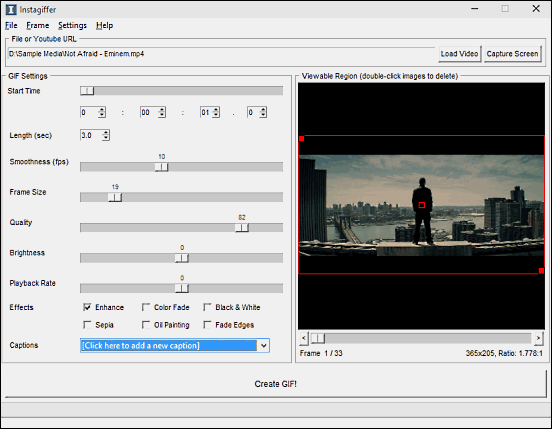 One of the best things about Instagiffer is that it’s incredibly easy to use. That’s because there are no confusing menus, wizards, or stuff like that. All the options and tweaks are accessible via a single screen. You start off by importing the source video, and its preview is loaded up on the right. After this, all the GIF related settings can be configured on the left, via handy sliders. You can specify the time markers, smoothness (fps), frame resolution, as well as quality. Not only that, Instagiffer also lets you change parameters such as brightness, playback rate, and add effects and captions. After configuring everything up, click the Create GIF! button at the bottom, and Instagiffer will take it from there. You can even upload your creation to Imgur, one of the largest online GIF sharing services. Read here to find out more.

It may not have a ton of options and tweaks, but Freemore Video To GIF Converter is more than sufficient for all your regular GIF conversion needs. The lightweight application supports majority of video file formats, such as AVI, MPG, 3GP, FLV and MOV. In addition to that, the user interface is ridiculously straightforward, and doesn’t really take much getting familiar with. To create an animated GIF, load up the video in the application, and a pop-up window will ask you to specify things such as start and end time markers, as well as the output resolution. For the latter, there are a bunch of preset sizes included, ranging from the SQCIF (128×96) to FullHD (1920×1080). Once this is done, click the Start button, and Freemore Video To GIF Converter will have your animated GIF ready in a few moments. You can even preview the GIF during the conversion process. Just make sure to skip the nagware during installation. Click here to read more. 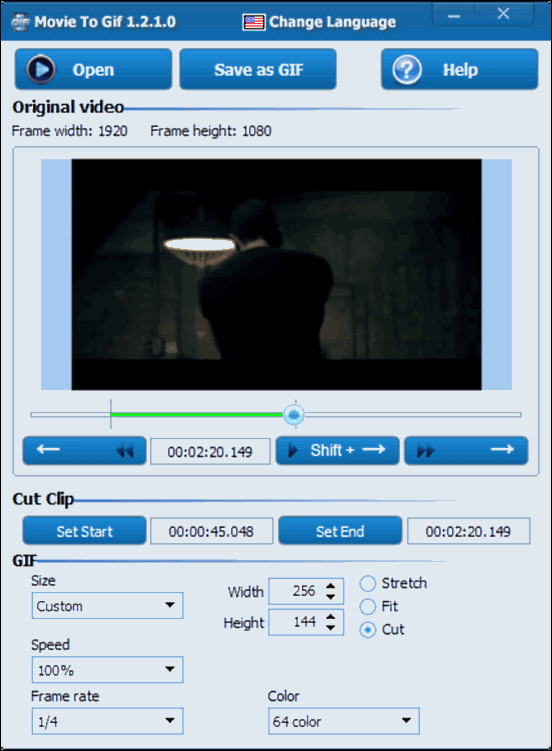 Finishing off the list is Movie To GIF, a simple and pretty good application that lets you turn videos into animated GIFs with minimum hassle. Sporting a lean looking single window interface, Movie To GIF is easy to get started with. Once loaded, the source video can be previewed in the embedded player. From here, you can specify the start and end time markers using the Cut Clip sub-section. Finally, the GIF section at the bottom lets you configure options such as size, speed, frame rate, as well as color depth. After setting all the options, click the Save as GIF button up top, specify a save name and location, and that’s pretty much it. Movie To GIF supports a whole bunch of video file formats, including AVI, MP4, WMV, MOV and VOB.

The applications discussed above are perfect for creating all kinds of videos to animated GIFs. Take them for a spin, and let me know your thoughts in the comments below.