Psychological Test is a free Android app to do psychological test for fun on Android. This Android fun app is a neat testing app to test psychology in a funny way. The app comes up with multiple types of psychological test, which includes love test, interview quiz, animals, how do you look at love, interaction, sexual type, surname profile, horoscopes, friendship, and much more.

The real good and trendy part of the app is its user interface. The calculation of psychology looks as if the app is really performing a psychological test on Android. Also, the categories under which the questions are put is one of the best part of the app, which I liked the most when in used it on my Android phone. You can select category of any type and know about yourself. Almost all the info provided by the app seems to be true, but then this Android psychological app is a fun app, and for that reason, all the answers and info are fixed.

When you install the app for the first time on your Android phone, you need to change your language to English, as the app comes up with Korean language as its default language. 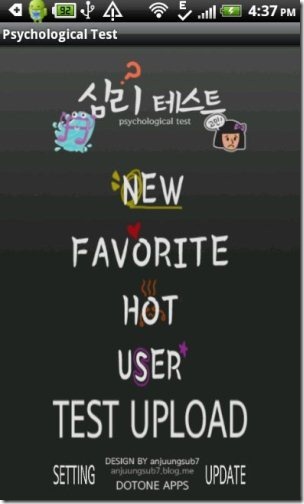 Check out Horoscope Plus app for Android reviewed by us.

Also, take a look on Horoscope app for iPad reviewed by us.

How To Use Psychological Test App: 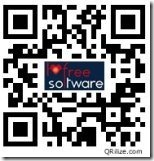 If you want to have some fun, then install this Android psychological test app and make a fool of your friends and others. Play with multiple categories and questions and get funny answers on your Android phone.