Instant Dictionary, is a free Windows 8 language translator app, that can translate textual contents from a specific language to another. The app advertises that it is powered by Microsoft Translator and can translate contents between 39 languages. You can simply type or copy paste the contents in the source text field; set desired resultant language, and translate the content with one single click. 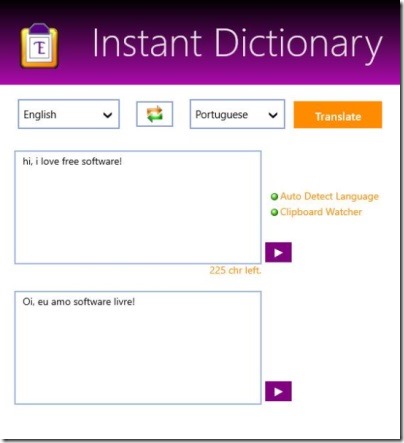 This Windows 8 language app promises to be a good language translator app for Windows 8. But it needs a little work with operating on the app. It showed few errors here and there while I was using the app. Which, kind of makes you lose interest on the app. But having said that doesn’t means that the app is no good. As per the language translation part of the app, it works quite well. It does actually translates the textual contents from any language to another, supported by Microsoft Translator. The app currently supports 39 different languages from around the world. To name a few includes: English, German, Japanese, Korean, Hebrew, Hindi, Chinese Traditional and Simplified, Russian, Spanish, French, Italian, Portuguese etc.

Not only you can translate the languages, and swap the languages between source and resultant, but, you can also listen how the translation sounds. Simply click on the Play button besides the Source text field and Resultant text field, and the app reads out the text you wrote. That’s a pretty cool thing about this app, and is a handy feature. Now you can listen and practice pronouncing those words. However the app doesn’t read out some of the languages, such as Hindi and Lithuanian.

The app has a single screen, and working on the app is pretty easy. All you have to do is select the source language, type or copy-paste source content in the Source text box (upper text box), select the resultant language, and click on Translate button. That’s pretty much it! I liked the fact that the app is kept clean, without any Ads. Currently, the total number of characters that you can translate is up to 250 characters; including spaces. 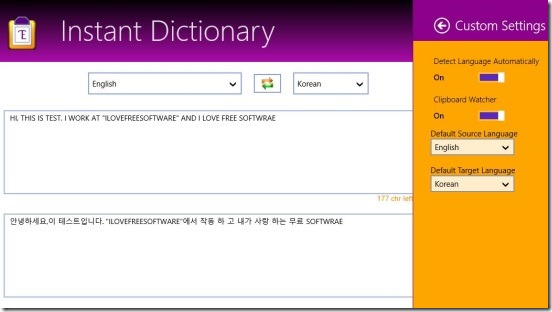 In order to make the app useful, this Windows 8 language translator app includes two more options, which are Auto Detect Language and Clipboard Watcher. Auto Detect Language, automatically detects the source and resultant languages. Hence, relieving you from manually selecting the languages. The Clipboard Watcher, automatically detects the content that are copied to clipboard, and automatically translates them. However, there’s a slight problem with this feature. While the user copies a  content into clipboard, the app loses the focus and that’s why goes to suspend mode. To make it work you need to click or touch somewhere on app, after you copied a content, so that it takes the focus again and read the clipboard and translate the content automatically.

You can switch these “On” by using the Windows 8 Settings charm (Win + I) within the app. Also right clicking on the screen, shows a flyout at the bottom containing Detect Source Language, Clear, and Swap Language buttons. 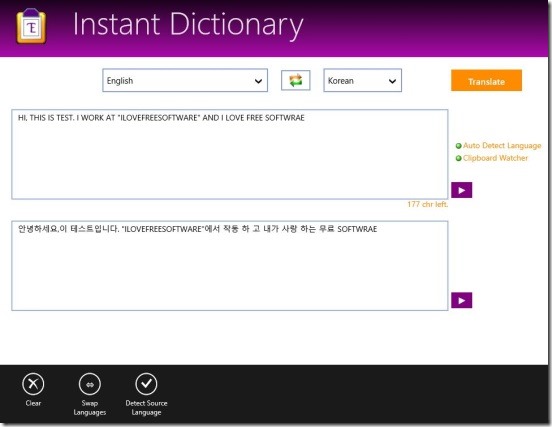 Instant Dictionary, is a good to have Windows 8 app. As per language translation it’s good, but it needs a little improvement on the clipboard watcher feature. Improve these, and no other app can beat this app. All in all a good Windows 8 language translator app.