Shazam is simply the most well know track recognition app available across most of the major mobile platforms. As windows 8 is also intended for tablet devices, so developers of Shazam have come up with a Windows 8 version of Shazam app.

Just like the other versions of the app, Shazam for Windows 8 allows you to recognize songs that are playing by simply holding device while the a track is being played. 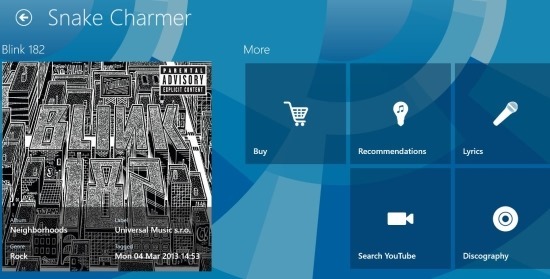 Shazam for Windows 8 is a little more better than the other mobile version of the application because the app offers you some features in Windows 8 that the other versions of the app for other platform do not offers. In total, the app provides you with more information about the song that is being played and other features that enhance the overall experience.

The app provides you with a simple and easy to use interface. So you pull up app from Windows 8 device and you can easily recognize tracks. Also when Shazam for Windows 8 recognizes the track it offers you features that allows you to buy the track, see the lyrics, search for the tracks on Youtube, view recommendations, and also see the artists’ discography and biographies.

How to use Shazam for Windows 8:

Just run the app and you will have the interface as shown in the screenshot below. The interface of the app includes a big or I would rather say giant Shazam button which says touch to Shazam and all you have to do is touch the button to start the recognition process and Shazam will bring up the results in a just a few seconds. All recent songs that were tagged are shown to the right of the Shazam button. 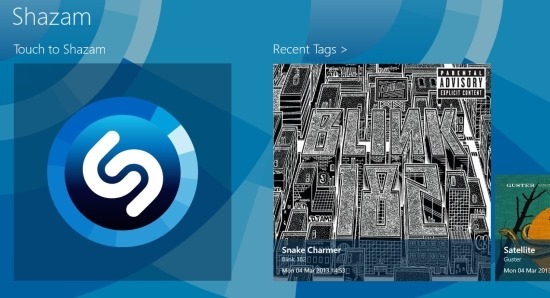 After the song has been tagged, the app will show name, artist, album art etc. of the song. This will be shown as seen in the screenshot below. Also the tiles are listed on the right of the app window from where the app gives you the ability to buy, search on Youtube, see the lyrics, get recommendation based on the songs, and also see the discography. 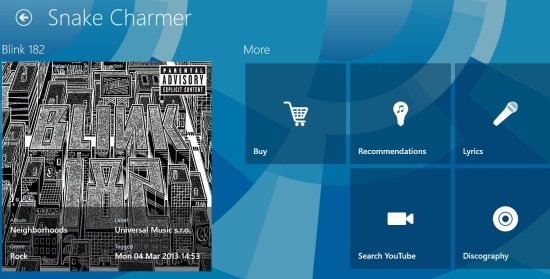 Features of Shazam for Windows 8:

In total, the app is simple like any other version of the app and does provide you with more features than Shazam for other platforms. I would say that this is a must have app for your Windows 8 device.

Download Shazam for Windows 8 from here. Also checkout Shazam for Android and iOS.