WireShark is a free and open source software that lets you track and analyze network packet data on your system. It’s a popular network traffic analyzer that tries to capture network packets and displays in-depth details on the packet data, so that you can easily examine what’s going on inside a network cable.

WireShark is quite useful in many areas. Like it can be used to troubleshoot network problems, examine network security, debug network protocol implementations, learn network protocol concepts, and so on. These kind of tools were earlier available as commercial software, but now you can get WireSharp absolutely free of cost for your Windows or Unix-based system. Use the link given at the end to download the software. 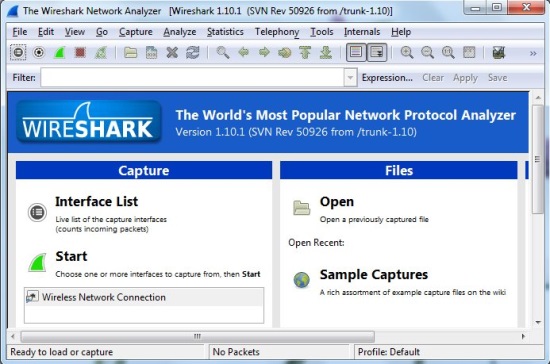 WireShark is a collaborative effort of hundreds of networking professionals all over the world. Such a huge number of active participants has resulted in a free open source Network Protocol Analyzer that has become de facto standard across many educational institutions and industries.

After installing this free network protocol analyzer on your system, you can use it to capture live packet data on your system. It supports a large number of network media types, including wireless LAN. After launching the app, you just have to click the Green colored- WireShark icon on the toolbar to start a new live capture. You can use other tools to stop the capture, list available capture interfaces, view capture options, find a particular packet, and do other related stuff. Apart from that, there’s a filter toolbar that lets you edit and apply display filters quickly. 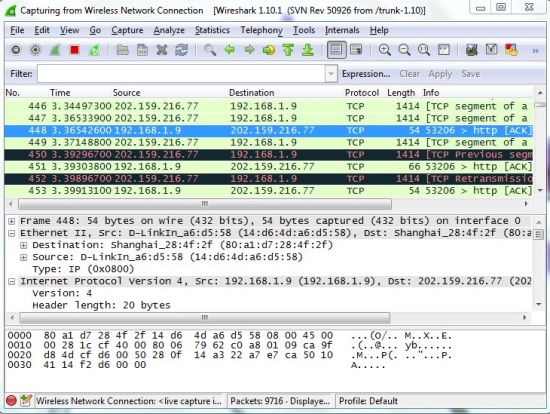 In the above screenshot, you can see there’s a Packet List pane at the top of the main window, which shows all the packets in the current captured file. Below this pane, there are Packet Details and Packet Bytes panes that shows more details on the currently selected entry in the Packet List pane.

This free network protocol analyzer also gives you the ability to import files from other capture programs and export captured packets in many supported output formats. This is all about the basic functioning of WireShark, and if you get confused anywhere in between, there’s a comprehensive help guide available that will solve all your problems. Now let’s have a quick look on its key features.

WireShark is really good, and must for every Network Professional’s toolkit. It can capture hundreds of protocols from different supported media types and display detailed protocol data, including byte information. Try it out and tell us how much you like it.