babysmash! is a freeware app that pops up colorful shapes, alphabets, numbers, and smilies on computer screen when babies bang on the keyboard. It’s a nice free software designed to help parents make their kids happy without harming anything on PC. If you too have small kids at home and they love to bang or smash on the keyboard while you work, just install babysmash! And forget about losing anything important.

babysmash! can be downloaded from its official website using the link given at the end of this article. After installation, you can simply launch the app and let your baby play with your system. babysmash! locks the Windows key, the Ctrl+Esc and Alt+Tab keys, so that your baby can’t exit the application on his own. To get out of the app, you can press Alt+F4. Let’s have a look on how babysmash! works. 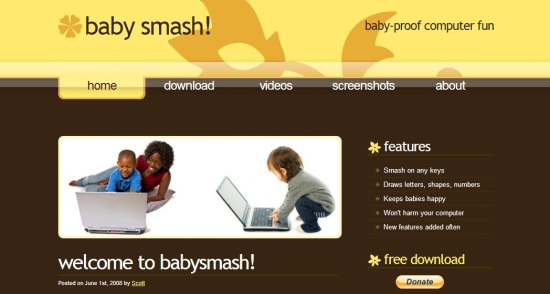 Let your Babies Playfully Bang on Keyboard without harming anything on PC:

babysmash! takes good care of everything, whether your baby is playing with your keyboard, or with your mouse. As soon as you launch the app, the entire screen appears white, and the mouse pointer turns into an animated hand. The index finger of the hand points to a series of colorful balls that rolls up and down in queue as your baby moves the mouse cursor. They glow beautifully and appears as if some toy train is moving. 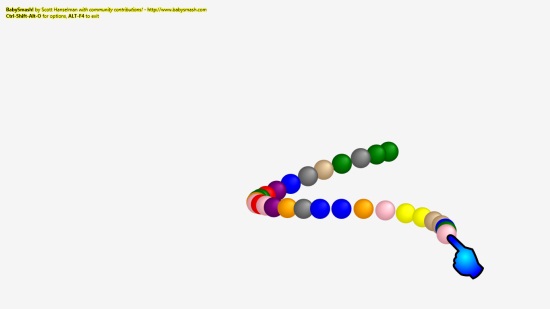 The keyboard part is also very interesting. Every alphabet or number your baby presses will pop up as a colorful animated character on screen. And if he or she presses some other button on the keyboard, random shapes appear with cute smiley faces on them. 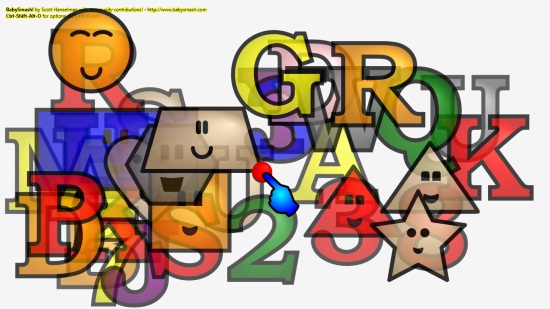 Not just that, you even have an option to play sound in background! So now your babies can view colorful animated objects and hear funny baby laughter as they bang on the keyboard. An interesting part is that the objects doesn’t pile up on the screen with time, they just disappear after a while giving space to the new objects to arrive.

babysmash! provides some settings which you can access by pressing Shift+Ctrl+O. This window lists options to change the background sound, cursor shape, font style, fade shape away time, etc. 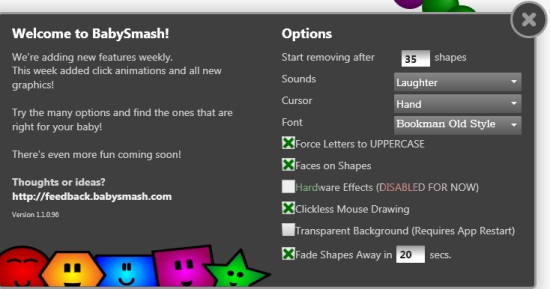 babysmash! is a nice free software that helps in making your PC kids-proof. If you have babies and you don’t want to disappoint them when they want to bang on your keyboard, try  babysmash! It’s absolutely safe and fun to use.