You will find a lot of fantastic features in these open source screen recorders. You can reverse the recorded video, record desktop as GIF, remove frames from recording, broadcast screen, capture screenshots of screen, a particular region, or active window, add image watermark to screen recording, add a text, show keystrokes and mouse clicks in recording, etc.

So, let’s begin with the first open source screen recorder software added to this list. 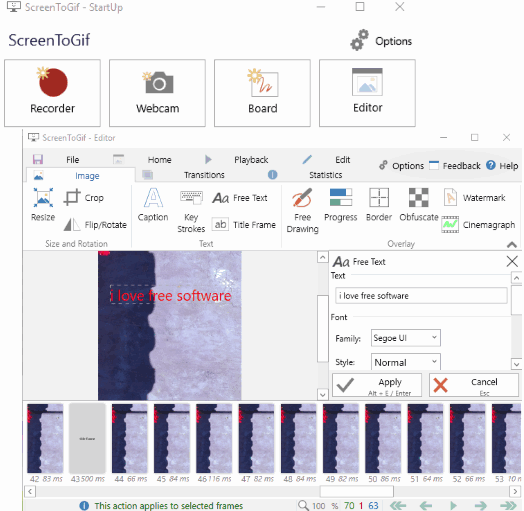 ScreenToGif is one of the best open source screen recorder software that I prefer over other similar tools. It is also a multipurpose software. You can use it to record screen as a video, animated GIF and record webcam. For recording, it also gives you features to detect mouse clicks, A unique record board tool is also available in it. That provides a whiteboard where you can draw in free-hand mode and record steps.

It uses FFmpeg to save the recorded screen. Here, you don’t have to install FFmpeg as it comes with it. You can save the recorded screen as AVI, WebM, or MP4. Before saving the recording, you can also preview it. The best part is you can also delete frames from recording which is simply awesome. If there are unnecessary frames that you want to remove, its recording editor will help you. Apart from that, it comes with features to add text in video, draw in freehand, add an image as watermark, reverse video, and more. All such fantastic features make it a powerful open source screen recorder and editor software.

You may also check its full review. 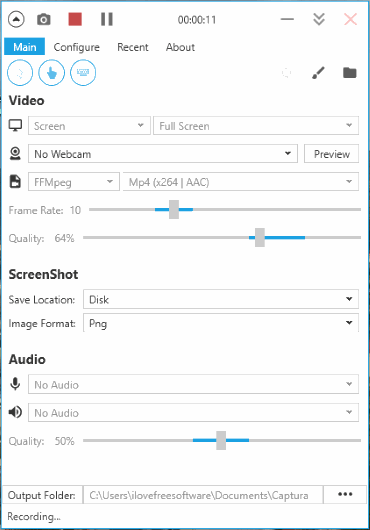 Captura has features similar to ScreenToGif software. Along with screen recording, it lets you record webcam, save the recording as MP4, AVI, or animated GIF. You can also include keystrokes, mouse clicks and mouse in the recording. It also has some special or unique features which make it better than many other open source screen recorders. It lets you record only audio, full or specific region, a particular monitor (if multiple monitors are connected), or a particular window (Windows taskbar or some opened application).

You can also set FPS or frame rate and quality for screen recording. One more feature that is very useful is hotkey support. It lets you add custom hotkeys to pause/resume recording and start/stop the recording. The screenshot capture feature is also present here. You can take the screenshot of an active application/window, full desktop, or a particular area. You can download its installer version or portable application, run it and use the interface for screen and/or webcam recording. All such amazing features make it a much better open source screen recording software.

You can read its separate review also. 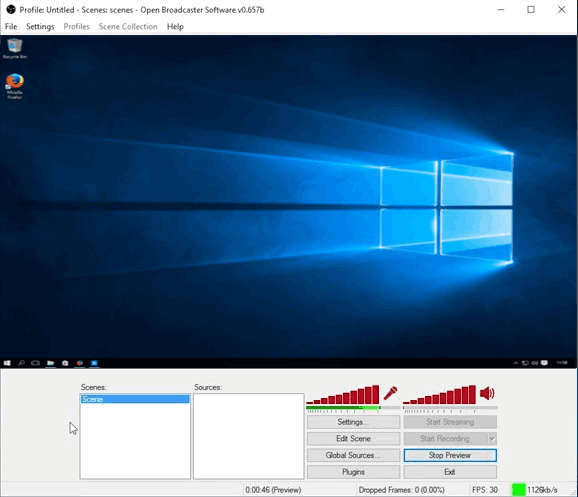 OBS Studio is a very powerful open source screen recorder as well as screen broadcaster software. You can record desktop screen either in the full screen mode or any highlighted area. As I already mentioned in starting, other than recording the screen and saving it, it lets you stream your screen or a gameplay directly from OBS.

You can also change the output format for screen recording by accessing Settings. You can set output format as MP4, MKV, FLV, MOV, etc. For screen recording, it also lets you adjust audio and video bitrate. There’s an option for changing the video resolution and the FPS too. And for easier navigation, you can assign different hotkeys too. This is a very good option to try. 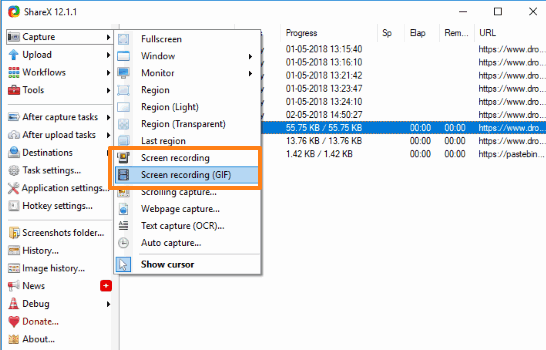 ShareX is a multipurpose software. This open source software is helpful to record desktop screen as video (MP4, WebM, or AVI), share files, take screenshots, record desktop screen as an animated GIF, annotate screenshot, upload recording to Dropbox, FTP, Box, OneDrive, Google Drive, etc. You can set hotkeys of your choice to start/stop recording for both video and animated GIF. You can also set the start time to delay the recording and also set a fixed duration for recording. In addition to that, you can set FPS for recording and show/hide mouse cursor in the recording.

To upload the recording to Dropbox or other available services, you need to configure your accounts. Otherwise, the recording is saved to PC. FFmpeg is needed for recording. If FFmpeg is not installed on your PC, then no need to worry. This software automatically adds it and then recording can be done.

Its screenshot capture feature is also great. You have the options to capture any of the opened applications (be it a folder, file, or software), a region, or full screen. After that, your screenshot can be edited with its native image editor. Other than these fantastic features, you can use its other tools like color picker, ruler, DNS changer, hash checker, etc.

You may also read its separate review. 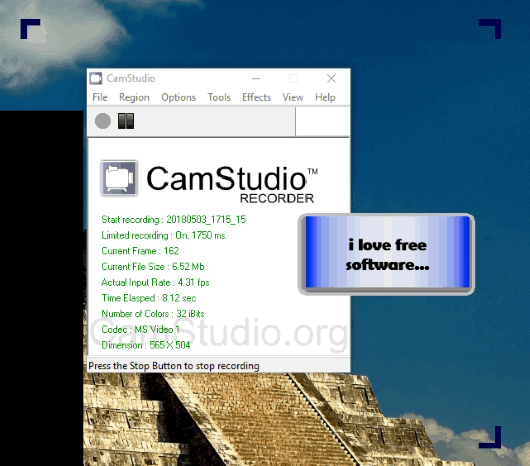 CamStudio is a popular open source screen recording software. It lets you record the entire screen, an opened window, or some specific region and save it as AVI video file to any folder on your PC. Option to enable/disable audio in the recording is also available. If you want, you can also switch to SWF format to save recording in that format instead of AVI. Keyboard shortcuts can also be set to record, pause, stop, and cancel the recording.

Some other interesting features are also available that you can try. It lets you convert AVI to SWF (or flash), show/hide cursor in screen recording, highlight cursor, add text to recording, use different shapes with custom text to show on screen for recording, etc.

Here is its separate review. 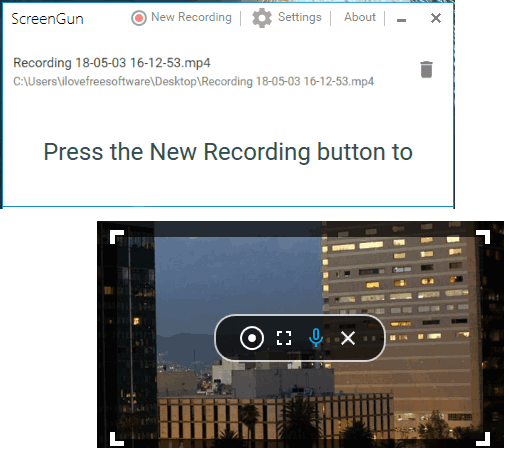 The list of saved recordings is visible on its interface. All the screen recordings are saved in MP4 format and you can’t change it. Like other open source screen recorders, it also uses FFmpeg but you don’t have to install it. It does come with the zip archive of ScreenGun.

JetScreenRecorder (Homepage) is also a nice option as an open source screen recorder. It has a very simple interface where you can adjust options before starting the recording. You can set video codec (MPEG4, WMV1 or 2, FLV1, MPEG2, H263P, etc.), output bitrate (50kb, 1000kb, 2000kb, etc.), FPS, output folder and screens (if using multiple monitors). Adjust options and then start the desktop recording. It can record screen in full-screen mode only.

This is what you can do with this open source screen recorder software. It works quite fine but it also lacks some features. For example, you can’t set a hotkey to start/stop/pause/resume recording. Also, its interface also comes in recording before minimizing it and stopping the recording. So, in that case, you need to edit the recording to remove its interface. Overall, the software is good for personal use.