Here are 5 free music player that can play CUE sheets. These music players natively support CUE sheets and can play all the listed tracks in it very easily. After reading a CUE file, these software organize tracks from the source music file as separate tracks with the help of the CUE sheet. And you can play them as you wish. These software allow you to change the sequences of the tracks in the playlist, add other songs in the list, etc. You can use all the features of these audio players while listening to your songs.

CUE sheet can be thought of a playlist file, but it works in a different way. CUE sheets are generally used for long music tracks for identifying a particular song’s starting point. Before digital music organizers, an album of an artist used to come as a single track. All the songs were joined in that single file. And to identify each song, a CUE sheet was used. And if you are still fond of CUE sheets, then the music player software that I have listed in the following list will help you. 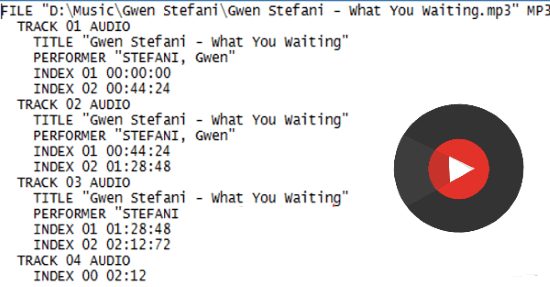 There are a lot of music players available, but very few of them support CUE sheets. That’s why I have come up with this list of free music player that can play CUE sheets. 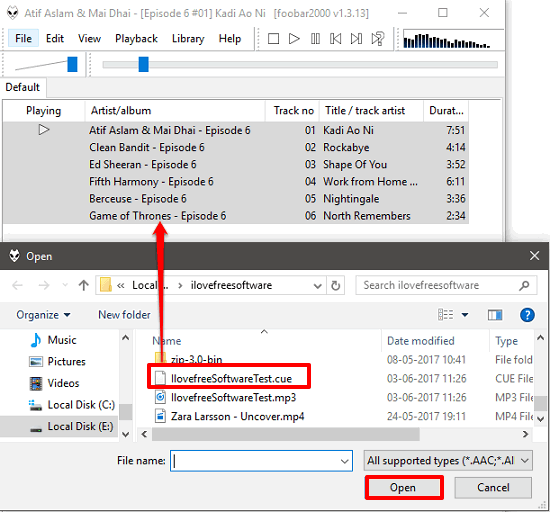 foobar2000 is quite a popular music player that can play CUE sheets. The support for CUE sheets is the native feature of this software. You can locate a CUE file that you want to play and it will automatically load the tracks associated with that CUE file. This audio player is smart enough to identify the starting of a song using a CUE sheet and the corresponding long audio file. You can play the tracks separately and use all the features of this software like equalizer, visualizations, playlist management, etc. However, you will not be able to edit the meta tags of the song that you play using CUE sheet.

It’s pretty simple to play CUE sheet in foobar2000. Just open the software and then use File > Open menu of the software to locate the CUE file. After specifying the file, it will look for the associated music file in the same folder and after finding it, it will list all the tracks from that music file. You can then play each song separately. You can change the order of the song in the playlist, or even remove songs from it. There will no effect of this on other tracks. Those tracks will still be playable. 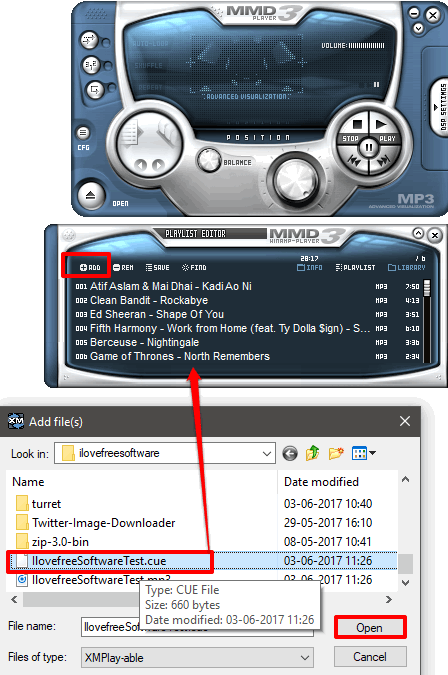 XMPlay is another free music player that can play CUE sheets. It is extremely light-weight media player that you can use to play CUE sheets. It can easily recognize CUE sheets and lists all the tracks on its playlist. You can then play the tracks separately and organize them in the playlist according to your choice. You can use the equalizer of the software, adjust volume and mixer level, and you can also add other songs in the same list to play.

XMPlay not only allows you to play files from local storage, but you can also play songs from FTP and HTTP. In the playlist, you can change the sequence of the songs and it won’t affect other songs which are fetched with the help of CUE file.

Playing a CUE sheet using XMPlay is very simple. It comes as a portable software, so you can directly launch it after downloading. Use the Add button from the playlist of the software and locate the CUE sheet that you want to play. It can easily recognize CUE sheets and can bring all the tracks associated with that to its playlist. After getting the tracks, you can do whatever you want. 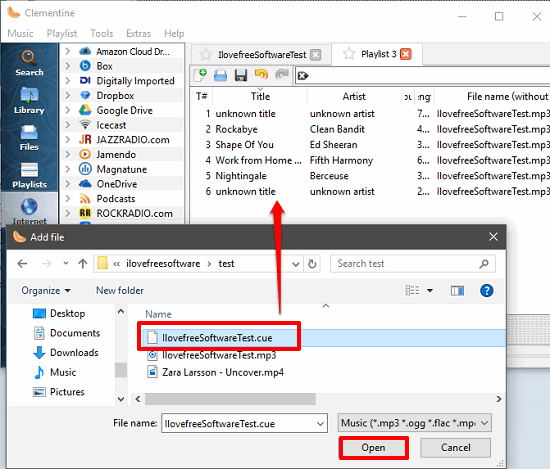 Clementine is quite a powerful music player that can play CUE sheets. Just like all the music player that I have listed here, you can do the same in Clementine to play CUE sheets. You can directly import a CUE sheet and after reading it, it will list all the songs on its interface that you can play. You can organize the songs in the playlist of this music player and play them. And not only using a CUE sheet, you can also directly import a long audio file and it will automatically detect the tracks and list them all.

There are numerous outstanding features in this music player. Apart from playing a file which is locally available on your PC, you can play songs from cloud storage. It supports Google Drive, Dropbox, Box, One Drive, etc., to play songs. Additionally, it also supports Podcast, Spotify, Jamedo like services as well. You can use them and enjoy a new different experience of music with Clementine.

Using Clementine for playing CUE sheets is very simple. Just open the media player and then use File > Open menu of the software to import a CUE file or joined audio file. After fetching the file, it will place all the tracks in its interface. You can then play those songs. If you want to add more songs to this list, then you can do that. 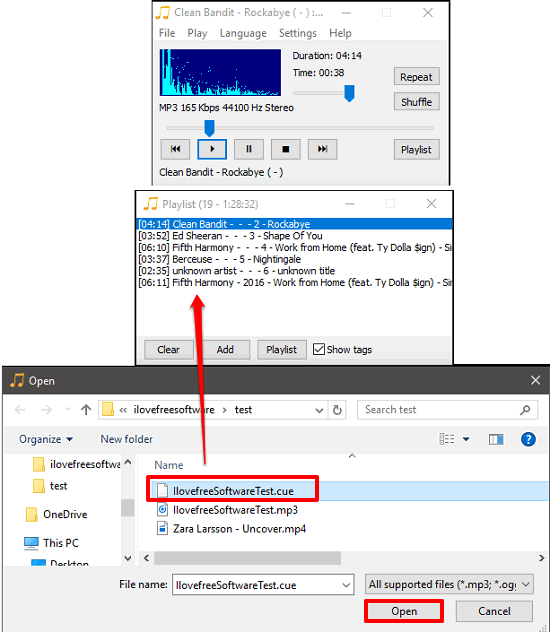 CrystralWolf Audio Player is another lightweight audio player that can play CUE sheets. It comes with a very simple interface that you can use to load and organize a CUE sheet.

It supports a long list of audio formats including WMA, MP3, WAV, OGG, MP4, M4a, etc., to play and there are some other features in this software as well. CrystralWolf Audio Player comes in various languages and you can use it Arabic, French, Norsk, Polski, like languages. This audio player has added hotkeys to do various playback operations and allows to you to manage favorite music folders. You can read the detailed review of CrystralWolf Audio Player here.

Using CUE sheets to play audio tracks with the help of CrystralWolf Audio Player is very easy. After running it, use the Files > Add Files(s) option to locate CUE sheet that you want to play. After locating CUE sheet, open it in the music player. And all tracks from the CUE sheet will be listed in the playlist of the audio player. You can then start playing the songs from the playlist and do whatever you want. 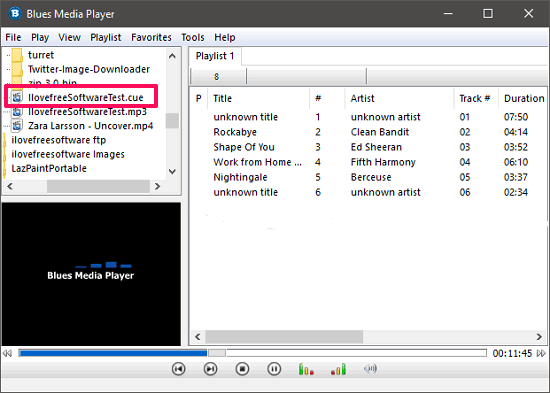 Blues Media Player is another feature-rich music player that can play CUE sheets. It supports a large number of audio files and playlist formats including CUE. You can open a CUE sheet in it as a file and it will list all the tracks on its interface. You can listen to those music tracks and change the order of the songs in the list. This music player comes with some other nice features that you will like.

It comes with a built-in file explorer which will help you locate CUE sheets that you want to play. Use the explorer from the left side of its interface and locate your CUE file. After locating, click on it and all the tracks will be listed on its interface. You can start playing them and listen to them. You can also add some of your music files from another location to the same playlist in which you have added tracks from CUE.

These are some very good and feature rich music players that can play CUE sheets. Using these, you can play tracks using a CUE sheet and also some of these software allow you to create one. And I really like the fact about these audio players that they come with some other set of nice features that you can use while listening to your songs that you have added to the playlist using the CUE sheets. So, if you are looking some free audio players to play CUE sheets, then this list of software will help you.