Here in this post, I have listed 5 free Android launcher for elderly people. You can install these Android launcher apps in the mobile phones of senior people in your home and society. These launcher apps are specifically designed for older people by making the size of the app and other icons bigger and bolder. These apps make identifying and reading contact names, app names, and other options very simple. Senior people with weak eyesight will find it very useful and they will be able to use their smartphone without relying on any other person.

Apart from big app icons and large text there are some other features in these apps. Some of them only simplify the home screen, while some of the following apps can modify other settings as well such as contacts list. To use these apps, you just have to install them and then make them your default app launcher. The best part is that, you can install all these apps in phone and use the one that you think is more friendly with elderly people. However, some of the apps show ads in the free version but that won’t be a problem if the target phone doesn’t use internet. 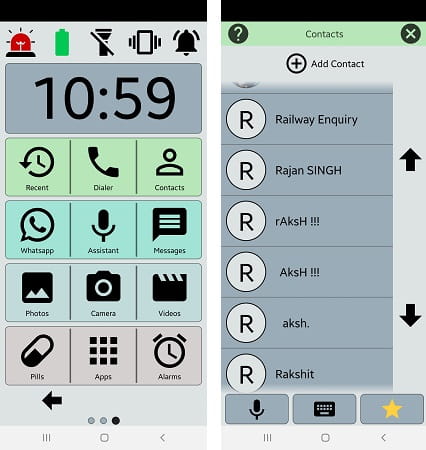 BaldPhone is one of the best free Android Launcher apps for elderly people. Here this Android launcher modifies the home screen along with the contacts list and dialer. It replaces the system dialer with its own where it shows the bold and bigger dial pad. Also, it replaces the contacts app of phone with its own. In its contacts app, you can see all the contact names in bold list. But the best part about this app is that it doesn’t use the fast taps. Instead, it uses long presses in order to make an action. This is a good option for weak and older people who can’t get used to the fast taps like we younger people do.

This is an ad free and open source Android launcher for elderly people. And this app hasn’t been published to Play Store which is why you will have to manually install it. Download the APK file of the app from the above link and then you can simply install it. Next, you can replace default launcher app with this on the phone. Also, you will have to give permissions to this app in order to access phone contacts. It adds a default home screen that you can see in the screenshot above. After installing and setting this app, hand over the phone to the elderly person in your home. 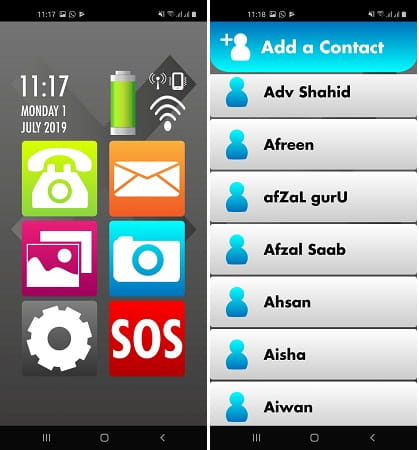 Help Launcher is another free Android app launcher for elderly people that you can use. Just like the app above, it modifies the home screen to make everything bigger. It even replaces the contacts list and dialer with its own to make it more user friendly for older people.

This is a simple and lightweight Android launcher that you can install in your grandparents phone. There are not so many fancy animated effects or features in this. The launcher has kept all the things super simple. You can modify the apps on the home screen and see status of connectivity there too.

You can get this app from play store and then install it. After that, replace it with the system’s old launcher and simply grant permission if it asks for any. It shows status of the WiFi, battery, day on the home screen and any old user will not have to see the small icon in the status bar or in notification drawer. 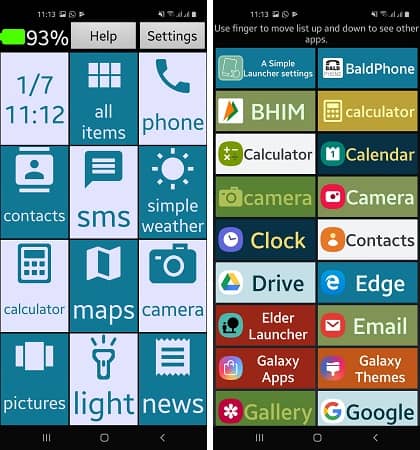 A Simple Launcher as the name indicates is a simple launcher with some really useful apps on the main home screen. You can customize the apps and the battery status, charging status, date, and time. It has some color schemes that you can apply on the home screen and there are other parameters that you can tweak. This launcher app is very simple, lightweight, and without any ads. The interface is not that polished but this is good for people who have just upgraded to Android from non-smartphone.

Simply get the app installed from Google Play Store and then simply set it as its default launcher. After that, you can see some apps that it adds on the home screen by default. You can change an app on the homescreen by simply long tapping it. You can replace apps in this manner and tweak color settings using the Settings button on the top side. There is a full Android app drawer as you can see in the screenshot above. 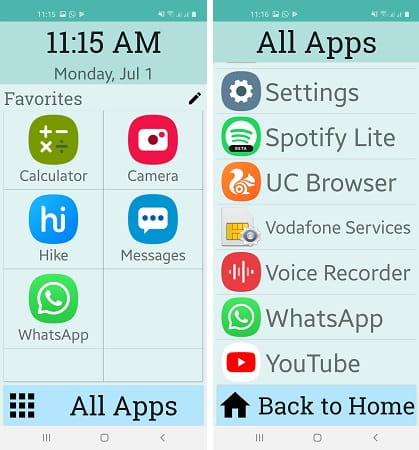 Elder Launcher is yet another free launcher for seniors you can try. This is technically a combination of an app drawer and home screen. It is a dedicated launcher for seniors that allows to add apps on the homescreen for quick access. The app is ad free and lets you add large size icons on the home screen. This is a pretty straightforward launcher you can install in the phone of senior people. There are no other features in it so basically you get what you see here.

Install this app using the above link from Google Play and then simply start using. Next thing you have to do is make this app as a default launcher for Android. Initially there are no apps on home, so you will have to manually add them. To add an app on the home screen, tap on the pencil icon and then add the app you want. There is a simple app drawer included and you can see the date and time on main screen in bold text. 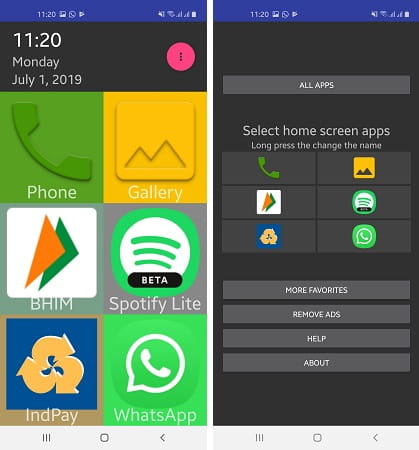 Senior Homescreen is the last free Android launcher in this list for seniors that you can use. Just like other Android launchers I have mentioned above, you use it in the same way. You just install the app and then you are good to go. As the name suggests, this launcher first modifies the home screen and makes it elder-friendly. You can add multiple primary apps on the home screen and then give the phone to any senior person. The launcher is simple and lets you modify apps that you want to show on the home screen

These are the best free Android launcher for elderly people that you can use. If you have some senior people in your home or in your community with smartphone then you can install these apps in their phones. These apps will definitely make it easier for them to quickly call their friends, relatives, and children by easily identifying correct apps. Also, these apps will be helpful for people with weak eye sight as they add a bold and large dial pad. So, if you are looking for free Android launcher apps for senior citizens then this post will be really helpful. Or, if you are using some other free app for the same then you can share that with us.