Mmm FREE is a free software that lets you modify context menu from within Windows explorer. It’s a lightweight and handy program, which allows you to modify menu items in a right click menu, and arrange them according to your wish. Mmm FREE work with almost all context menus within Windows explorer, including start menu, desktop, and folder background. Mmm FREE works with Windows XP only.

What it basically does, is that it makes a list of all the menu items available in a context menu, and lets you organize them by categorizing them as rarely used and hidden items. Thus it provides handy solution to manage dozens of useless menu items that you hardly use within a context menu. 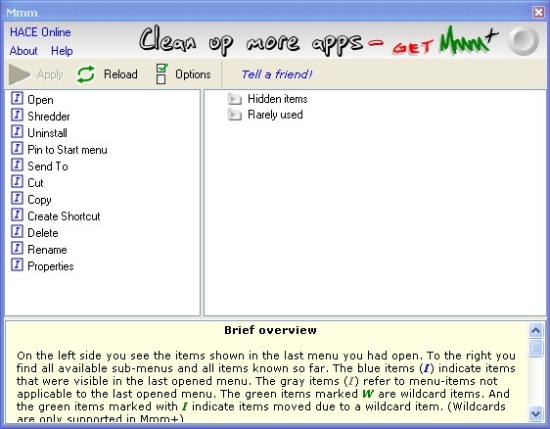 Before we move on to more explanation on how Mmm FREE works, let’s have a look on its download and installation part.

Mmm FREE is a lightweight software; less than 1 MB in size (857 KB). It’s available as a freeware and can be downloaded from its official website using the link provided at the end of this article. Mmm FREE works with Windows XP only. Once downloaded, it can easily be installed on your system in few seconds and becomes ready to use.

Now let’s see what all you can do with Mmm FREE.

After the installation finishes, you won’t see any kind of user interface in front of you. All you see is a colored bar in the left side of the context menu, whenever you make a right-click anywhere (except on browsers and some unsupported applications). 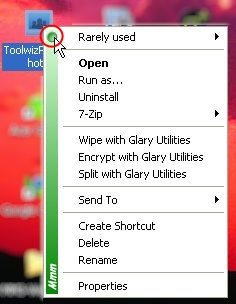 There is a colored button on top of this bar; just click on that to open Mmm FREE. The next window that gets open will let you configure the open menu. 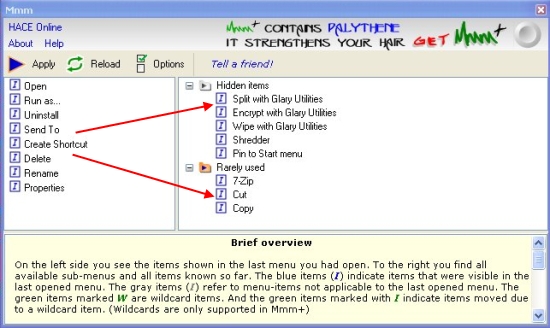 The window contains two sections: all menu items present in the opened menu on the left side, and two sub folders naming “Rarely used” and “Hidden items” on the right. Now you just have to drag and drop the relative items from left to right and save changes. That’s it! The menus will be restored once you exit Mmm FREE. 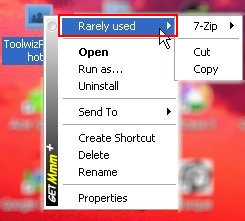 The interface itself explain how Mmm FREE works, through the small help window which is present at the bottom of the program windows. You can refer that to easily configure context menus in your system and organize them into sub folders that includes rarely used and hidden items.

Mmm FREE is a nice program that lets you configure the context menus and some other normal menus of supported programs. It’s a nice tool to organize the context menu items in your system and keep only those you use the most. Moreover, it lets you get rid of all those useless menu items that get’s added when you install new applications in your system. However, it would have been better if the application was capable of working with higher versions of Windows as well. But anyways, it works fine with Windows XP. XP users must download it and give it a try.