When it comes to developing websites, web developers often have to test them across multiple browsers, as well as different versions of the same browser, to ensure that they render properly. That’s because different browsers (and even different variants of the same browser) often use varied rendering engines, and things like that. And this can be quite a taxing affair, given the large number of versions of a web browser out there.

However, if you’re web developer who wants to check how websites look in multiple versions of Firefox, one of the most popular web browsers out there, you’re in luck, thanks to Utilu Mozilla Firefox Collection (Utilu MFC). A bundled collection of over 45 versions of Mozilla Firefox (ranging from v2.0 to v41.0), Utilu MFC lets you install and run all (or some) of the Firefox versions side by side. Utilu MFC automates launching of the installed Mozilla Firefox instances, and there is a pre-defined time gap between two launches. Psyched? You know where to find the details!

Note: Because of the large number of Firefox versions it contains, the unified installer of Utilu MFC measures at around 500 MB, and needs almost 3 GB of disk space for installation. So make sure you’re not running low on disk space, before proceeding.

How To use Utilu MFC To Check How Websites Look In Multiple Versions Of Firefox?

Step 1: After you’ve downloaded the bundled Utilu MFC installer from its homepage, run it. During installation, you can specify which version(s) of Firefox you want to install. The default selection installs all the bundled versions. Once you run the Utilu MFC executable, a screen asks you to enter the URL(s) of the website that you want to test with different versions. Multiple URLs should be enclosed within quotes. Hit Next. 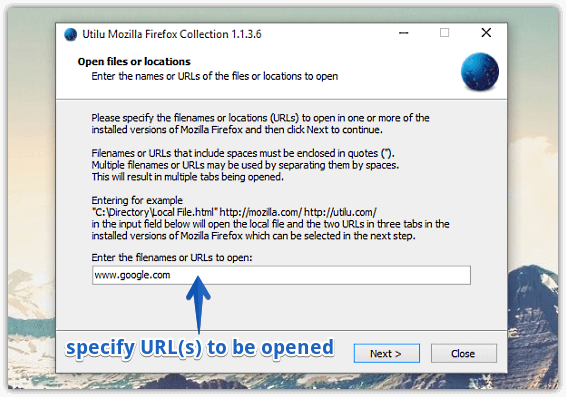 Step 2: The next screen lets you configure the versions of Firefox in which you want to open the specified URLs. As you do that, Utilu MFC will take care of the rest, opening up the URLs in one Firefox version after another. Since multiple versions run at the same time, you can visually compare them side-by-side too. And that’s not all, each bundled Firefox version includes a toolbar having tools to tinker with webpage elements such as images, CSS etc., for even better troubleshooting. Here’s a screenshot, showing a webpage running in two different versions (one older and one newer) of Mozilla Firefox: 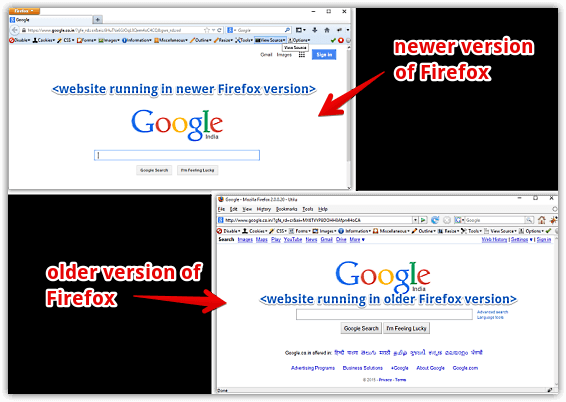 Testing how websites look across multiple versions of a particular web browser is an essential part of web development. And if the browser is Mozilla Firefox, Utilu MFC can take all the hassle of this testing process. Give it a shot, you’ll be glad you did.