YouTube has now introduced a new feature that lets you add intro videos to all YouTube of your channel. You can make a three second intro video and add it to all your videos. You can also choose to add it to only those videos that were uploaded after a specific date. And the best part is that you can change Intro video anytime you want!

This is a really great feature, which was being awaited since quite a long time. We also maintain a YouTube channel here and we have to include Intro video within the main video. The biggest disadvantage of this is that if we have to change Intro video anytime in future, then we will have to go back and re-do all the videos again. But with this future, we can have a consistent branding to all the YouTube videos, irrespective of when they were uploaded.

How To Add Intro Videos to All Your Youtube Videos

First of all, you need to have a video that is three seconds or less. Also, the video should be uploaded as a “Unlisted” video. If you do not have any such video, YouTube will not let you set Intro for the videos. I am not sure why YouTube has imposed this restriction of three seconds; probably to avoid too long intro / branding within videos. But that can anyway be done by just manually adding intro of any length to a video. Anyway, YouTube would probably have a good reason behind it.

Continuing with your tutorial, once you have your intro vide uploaded, go to “InVideo Programming” page. You can also access this from directly under “Channel Settings” section. 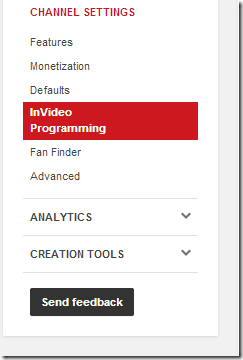 On the right side, you will see multiple options. Select the option of “Add a branding Intro”.

If you do not have any Unlisted video of 3 seconds or less, you will get an error message. However, if you have already uploaded the Intro video, then it will show a pop-up which will show all the eligible Intro videos that you can use. 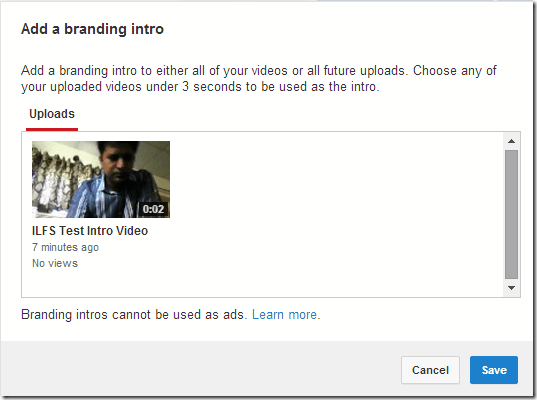 Just select the video that you want to use and click on “Save”.

Once you do that, the page will reload and now you will see a section for Branding Intro. It will show the intro video that you selected. It will also show an option to apply Uploads to all the videos that you have uploaded, or only to videos uploaded after a specific date. In case of latter, you will be asked to select a date. Once you have made the selections, click on “Update” to apply the Intro video to your videos.

Limitations of this feature of Adding Intro Videos to YouTube:

This feature is definitely very useful, but it comes with its own fair share of limitations as well:

Do note that YouTube does not allow this intro video feature to be used as sponsorships, ads, and product placements.

My Opinion About Intro Videos Feature:

I personally like this feature a lot. I am quite happy that YouTube has given an option to specify upload date for applying intro to videos, because I can leave my old videos intact and apply a standard Intro video to the new videos that I upload hereon. I would love if they remove some of the limitations that I mentioned above. Other than that, this feature rocks.