Although there are many right-click context menu hash calculators and other advanced hash calculator software available, but if your need is to generate file hash using Command Prompt, then you can use the methods listed below.

Hash Console (or HashConsole) is one of my favorite command line hash calculator software. It can generate CRC32, MD2, RIPEMD160, ADLER32, MD5, SHA1, SHA256, SHA512, HAVAL256-4, MD4, and WHIRLPOOL hashes together. The best part is that you don’t have to specify the hash type. Just enter the command to generate hash values of a particular file. It can’t generate hash of multiple files, but a good option when you want to generate different hashes of a particular file.

Step 1: Get the zip file of Hash Console software and extract it.

Step 2: Open Command Prompt by typing cmd in the Search box. After that, drag n drop the application file of Hash Console on Command Prompt window. Continue the command by pressing Space key and then enter the source file. So your full command would be: HashConsole.exe -f “path or source file“. 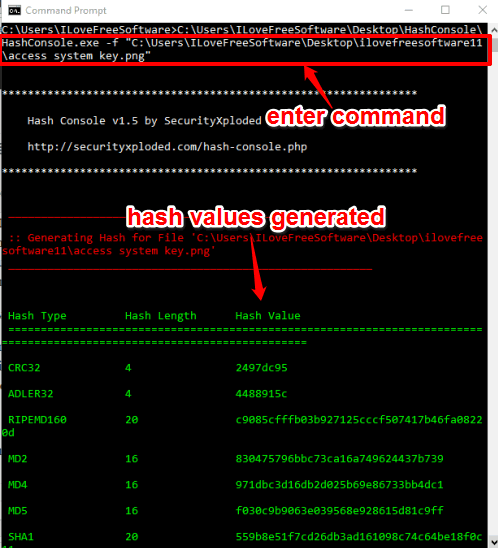 Press Enter key and hash values of that particular file will be in front of you. It shows hash length, hash type, and hash values separately. This makes it a good command line hash calculator tool.

HashMyFiles is a powerful software that can generate hash values of multiple files or files available in a particular folder. You can use its interface as well as execute it using Command Prompt window. The output is generated on its interface. It can help you generate CRC32, SHA256, SHA384, SHA512, MD5, and SHA1 hashes of multiple files together.

Step 1: Get the zip archive of HashMyFiles software and extract it in a folder.

Step 2: Launch Command Prompt window and then drag n drop HashMyFiles application file. After that, give a space and add a source file/folder. If you want to generate hash values of multiple files then you need to give source paths of all those files. Your command would be like: HashMyFiles.exe “path of source file1” “path of source file 2”. 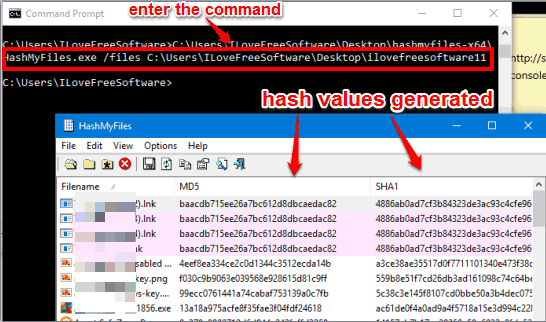 CommandLine Hash Generator (also known as cmdhashgen) is another good free command line hash calculator software. However, it can generate only one hash at a time for a particular file. Still, I will say it’s a useful hash generator software because it supports different hash types. Supported hash types are: SHA384, SHA512, MD5, CRC32, SHA1, and SHA256.

Step 2: Run Command Prompt and then drop cmdhashgen tool on that. After that, continue the command by entering the hash type (SHA512, MD5, SHA384, etc.) and adding the source file. So the command would be like cmdhashgen.exe /SHA384 “path of source file”.

Execute the command and then you will be able to generate the hash value of that particular file. Here I have generated SHA384 hash of a file. You can replace /SHA384 with some other hash value to get the hash.

DirHash software has features similar to cmdhashgen software. It can generate SHA1, MD5, SHA384, SHA512, and SHA256 hashes of a file. However, only one hash value of a file can be generated at a time.

Step 1: Grab the zip file of this software and extract it to access DirHash application.

Step 2: Open the Command Prompt window and drop DirHash application file. When it is done, press Space and enter the source file and press enter. It will generate SHA1 hash value of that file. However, if you want to generate SHA256, MD5, or some other hash value, then your command would be: DirHash.exe “path of source file” Hash Type. 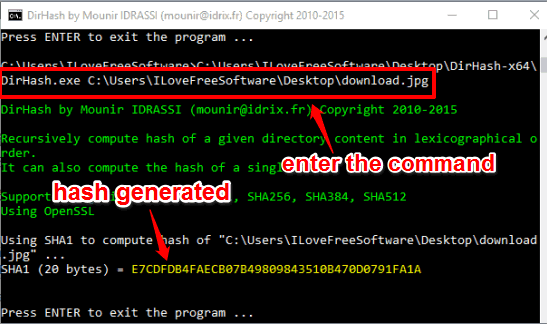 These are some very good options to generate file hash using Command Prompt window. Among all these command line hash generators, I personally prefer Hash Console software because it generates multiple hash values of a file together. The second best software is definitely HashMyFiles software. It is quite handy to bulk generate hash values of multiple files or a folder containing a lot of files.