Sometimes you might come across a situation that the battery of your iPad and iPhone drains quickly. It is obviously caused by some app(s) but, before iOS 8, iPad did not provide info about the battery consumption of individual apps. Thankfully, now Apple had added this feature to iOS 8 to check battery usage for individual apps. The battery consumed by each of the app is displayed in % which makes it easy for you to analyze the battery consumption by each app. Apart from this, you can also check Usage and Standby time for iPad since last time you charged it completely.

Note: The battery usage for individual apps on iPad in iOS 8 is shown by counting only that time when your iPad was not charging. 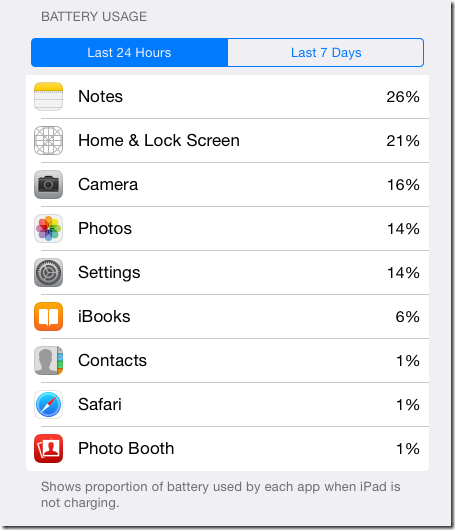 How To Check Battery Usage For Individual Apps on iPad in iOS 8?

Also check out How to Make Time Lapse Videos on iPad in iOS 8.

So, by following these steps, you can easily check battery usage for individual apps on iPad in iOS 8. Follow it and find out the apps which are responsible for quick draining your iPad’s battery and then see if you can get rid of them.

You may also like: Battery Doctor for iPhone and 4 free iPhone battery saver apps.