Lets have a look on these free PowerPoint Viewers, one by one. 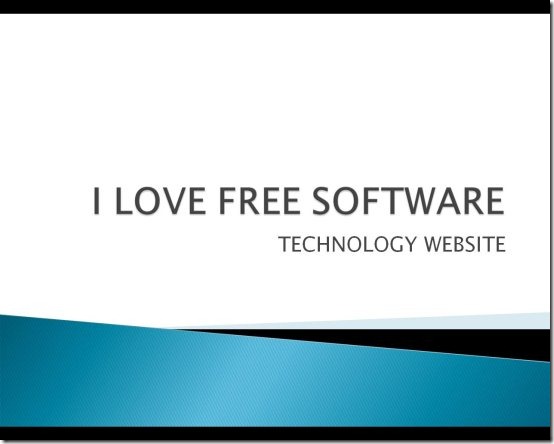 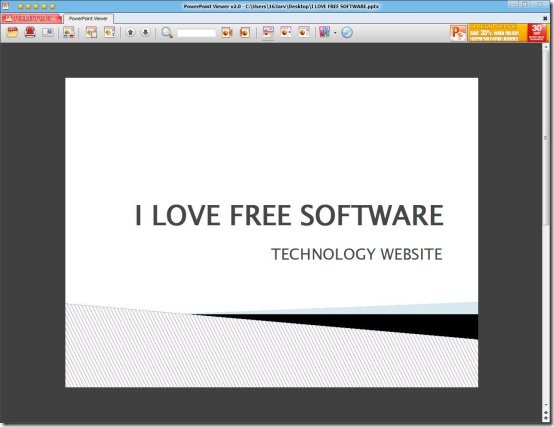 PowerPoint Viewer by FoxPDF is a standalone application that doesn’t require Microsoft PowerPoint to be installed on your computer, to open PowerPoint documents. Although the program supports opening files in wide variety of formats, however, it hampers the quality of the presentation a little bit. This free PowerPoint Viewer works with almost all Windows versions (in both 32 and 64-bit formats) and is available in 7 different languages, including English, German, French, Italian, Chinese Traditional, Chinese Simplified, and Japanese. 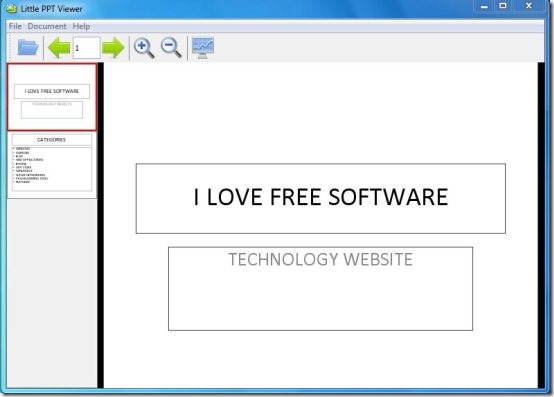 LittlePPT is another freeware that supports opening and viewing PowerPoint documents. It’s a simple and lightweight program (size just 1.6 MB), which allow users to easily open and view PowerPoint presentations. This free PowerPoint Viewer provides a user-friendly interface, though it doesn’t supports opening files in latest PowerPoint formats. It can open files in PPT and PPS formats only. You can use LittlePPT if you are still using an older version of Microsoft Office.

I would like to mention here that the website says that LittlePTT can open PPTX files also, as well as it lets you save and edit PowerPoint files. However, the version which I tested, did nothing besides opening PPT and PPS files.

Apart from opening and displaying PowerPoint files, LittlePPT allows to Zoom In and Zoom Out slides. You can also view the presentation in full screen mode. LittlePPT is a nice PowerPoint Viewer as far as the simplicity and ease of the program is concerned, but it lacks opening files in latest PowerPoint formats, which is a major drawback of the application. It would have been better if the developer had revised the application to make it compatible with all available PowerPoint formats. 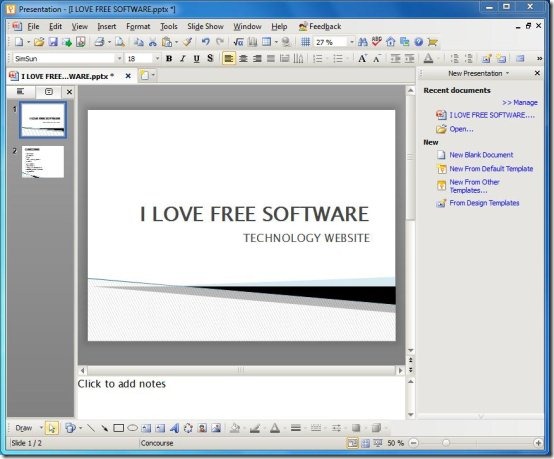 Kingsoft Presentation 2012 is a free Microsoft PowerPoint alternative, which allows you to open, edit, and save PowerPoint documents. It’s a handy and reliable software that offers a wide variety of useful tools to let you create dynamic and impressive PowerPoint presentations.  It provides a user-friendly interface which makes it handy for both advanced as well as novice users. The interface is almost similar to that of Microsoft PowerPoint, which gives a feel of working with the traditional PowerPoint application. It supports almost all PowerPoint formats, including PPTX, PPT, PPSX, PPS, and POT.

Kingsoft Presentation 2012 is not that big in size(just 37MB), and it works great to match all the features of Microsoft’s official PowerPoint application. Though it’s a powerful editor, it can still be used as a Viewer application because of its small size and free availability.