hCamera is a hidden camera app for Android. It lets you capture photos and record videos without having any camera preview which you get while using normal camera apps on Android device. You can easily switch between front and rear camera with just one tap.

The app has been designed in accordance with Google’s Material Design guidelines which means you will get a fresh and colorful interface. There are also various settings which you can adjust like picture quality, picture size, video length, etc..

So, let’s get started. 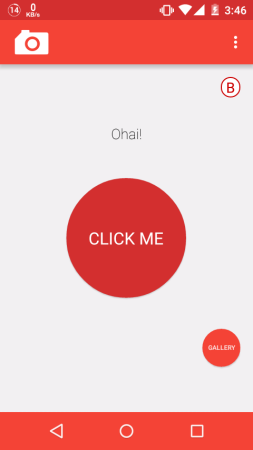 When you will launch the hCamera app on your Android, you will see the minimalist interface with a big circular button in the middle of the screen. You have to tap on the button to capture the photo and if you want to record a video, then simply tap and hold on it. 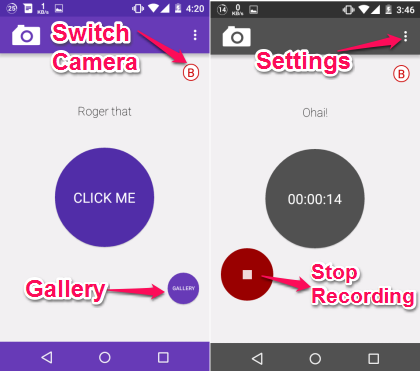 You can see that I am recording a video in the screenshot on the right, but there’s no camera preview. It is appearing like a timer. When you want to stop the recording, you need to tap on the button on the left side.

The app changes the theme color when the photo is clicked or video is recorded. It is like a silent signal to you that the app has done its work. There is also another silent signal for the same. It is the change in the random texts that show up on the app’s interface. This way, you can see that the app is extremely easy to use, capture photos, and record videos.

The hCamera app provides you with various customization options to make the app work as per your specific requirements. You can do that from Settings. There are options to change the name on the button, default camera, picture quality, picture size, and video length. 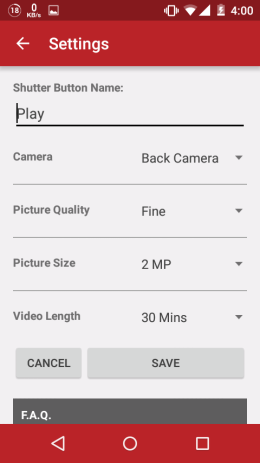 You may also like: 5 Free 3D Camera Apps for Android.

hCamera is an amazing hidden camera app for Android which makes it really easy to capture photo and record videos without having the camera preview. The developer could have provided the options like choosing video quality, changing the storage location, etc.. But as for basic and stealth use, the app is perfect.