Ball in the Cup, is a free Windows 8 game app. It’s a very simple but good Windows 8 game app. The game is all dependent on gravity, bouncing, timing, and most importantly decision-making. All you have to do is place the ball in the cup. It’s a small game so, it doesn’t occupies too much space in your Windows 8 device hard disk. And that’s the beauty of this game, it’s simple, lightweight, fun, and winds up in few levels. You don’t have to get stuck to this game for ages.

But don’t take the game too lightly. In fact, it’ll give you enough challenges, and obstacles to make the game fun, and exciting. There are not too many levels in the game. But each level is equally fun. And in some levels you’ll get not just one, but 3 to 4 balls, that you can put in the available cups, doing which gives you much bigger scores. 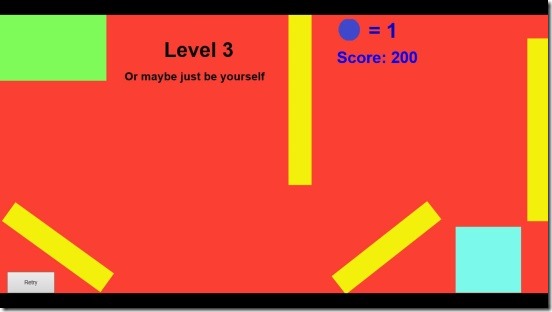 This is a type of Windows 8 game app, that you would like to play and finish in few trails. You won’t take much time to finish the game, and that makes the game a good free time killer.

Playing the game in this free Windows 8 game app, was fun. It’s very straight forward and plain simple. There are hardly 7 levels in the game. And in each level all you have to do is place the ball in the cup that has light blue color. But there are some rules in the game, the first one is obviously the gravity, then comes bounces. The third rule is you can’t put the ball directly in the cup; there’s a green area in the playing screen and a red area. It’s only the green area where you can drop the ball, and not on the red. Along with these rules you also have to look out for the obstacles which are basically static and moving slabs. Not only you have to avoid some of the slabs, but at the same time, use other slabs as a medium to bounce and guide the ball towards the blue colored cup. You can’t control the slabs, all you can do is drop the ball anywhere in the green colored area. Simply drop the ball, sit back, and watch the ball move.  Now, this dropping of ball completely depends on your decision-making ability and timing knowledge. If you are able to drop the ball at right time, and at right place, then surely the ball will go inside the blue cup. Or else it won’t, sounds good right? 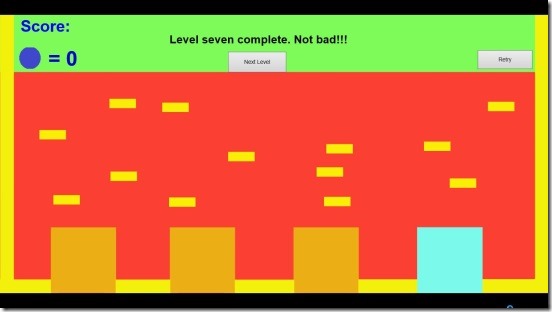 Also to make the game more fun, at higher levels, you get 2 to 3 cups, where you can put the extra balls. This helps you in scoring more. But it’s compulsory that at least one ball goes inside the blue cup. Once it goes inside blue cup, the level is cleared.

Here are some other cool and fun Windows 8 game apps based on ball, that you would want to play in free time: Tiny Ball vs. Evil Devil, Falling Balls!, and Pinball FX2.

Ball in the Cup, is a good Windows 8 game app. Everything in the game is good, simulations (animations) are smooth, controls that is a simple click works fine. I liked the background music quite much. All, in all a good, fun, and playable game app.

Try Ball in the Cup here.