Well, almost everyone knew Redmond had something new store but I’m sure, this is not what they were expecting. It’s official people. After months of speculation, leaked screenshots, discussion, and things like that, Microsoft has finally announced the next version of its flagship software product, the Windows family of consumer and enterprise operating systems. But contrary to what almost everyone was expecting, it isn’t called Windows 9. Known only by its codename “Threshold” until a few hours ago, the new version of Windows, announced recently by the software giant at an official press event in San Francisco, is called Windows 10. Yeah, you read that right! Microsoft has decided to skip over a version number and head straight to the next step. The question I’m sure everyone is asking is, why?

It’s probably because Windows 10 presents perhaps the most comprehensive re-work of the Windows Operating System line. It introduces a whole barrage of new features, and brings back some old ones. It’s Windows unlike you’ve ever seen or imagined it before. Sounds exciting, doesn’t it? Trust me, it is. So let’s see what Windows 10, available for download shortly as a Technical Preview Build, and slated for an official full blown release sometime later in 2015, is all about.

Windows 10, the next major release of the Windows family of Operating Systems includes a bucket load of new and exciting features, both for consumers and enterprises. Though it’s not exactly possible to detail every single thing that’s new, the following are the major highlights of the erstwhile Threshold. Read on:

1. Continuum – Many Devices, One Windows!

Probably the biggest highlight of Windows 10 is that it is the first visible (albeit not fully complete) result of Microsoft’s new vision for the future. It’s a vision that includes Windows becoming a truly “unified and universal” operating system. What does this mean? It means that Windows 10 would be Microsoft’s first ever Operating System to run on the broadest range of devices ever, with some devices having 4 inches screens, and other having screens up to 80 inches. It would even run on devices having no screens at all. This revolutionary feature, dubbed by Microsoft as “Continuum”, would make Windows 10 the first truly universal Windows OS, having an adaptive UI. Windows 10 would offer an inherently unified product experience across a multitude of devices, but something still uniquely identifiable with a specific device. So if you run Windows 10 on a keyboard and mouse controlled device, it’ll switch to the traditional desktop mode. Want to run it on a touchscreen device? The tablet mode with touch input will have you covered. And Windows 10 would be able to switch amongst these on the fly. Even your store purchased apps would be universally updated across multiple devices. Sounds like science future? Actually it’s very much real! 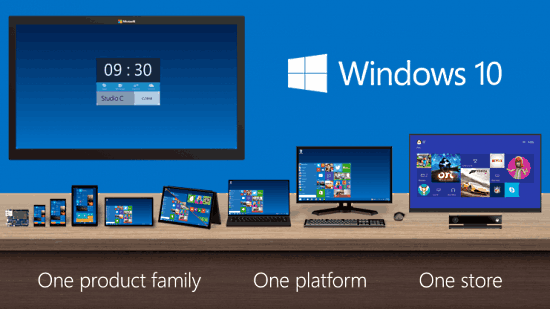 2. Your Beloved Start Menu Is Back!

When Windows 8 was released about 2 years ago, it was appreciated for its minimalistic looks (no more Aero), faster boot times and a lot of goodies that it introduced. However, it was also loathed (especially by non-power users) for taking away one feature that had been a part of Windows ever since its introduction. As you might’ve guessed, I’m talking about the Start Menu. The good ol’ menu that popped up from the bottom left corner of the desktop on clicking the Windows logo icon and introduced many first timers to the OS, was scrapped in favor of the Start Screen, a full screen UI customizable with Live Tiles throwing all sorts of real-time information at you, ranging from stock alerts to the current weather. Although the Start Screen eventually became the symbol for Windows’ new direction, old-timers derided it for being unintuitive and pointless for non-touch (read: mouse) based input. Your prayers have been answered, folks. With Windows 10, Microsoft has brought back the much beloved Start Menu, and it’s a lot better than before (tears of joy!). The Start Menu of Windows 10 is completely customizable, and lets you pin Live Tiles and your favorite apps to it for rocket-fast access. 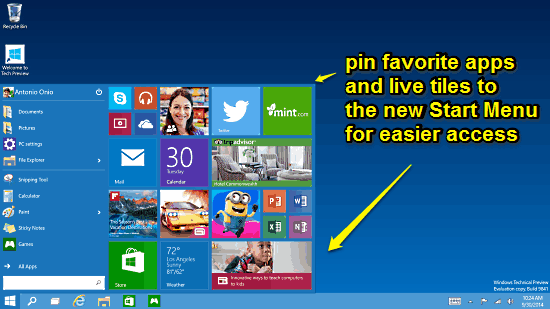 I don’t know about you guys, but I absolutely love the Modern (earlier known as Metro) design language. In fact, I like it so much that I find myself firing modern apps (News, Sports, Weather etc.) just for the heck of it, because those full screen modern apps are drop dead gorgeous. But hey, different people, different tastes. When Windows 8 introduced the full screen modern apps, people found it confusing to open and close them because they used gesture based controls, and not the regular X button on the top right that everyone was (and still is) accustomed to using. Although Microsoft fixed that with auto-hiding controls in subsequent OS patches, it never really stuck. This is no longer the case. With Windows 10, every single app (modern or traditional) runs inside a window. This also means that they can be resized on the fly just like any other program window. They even have scroll bars and the standard trio of minimize, maximize and close buttons. Yay! 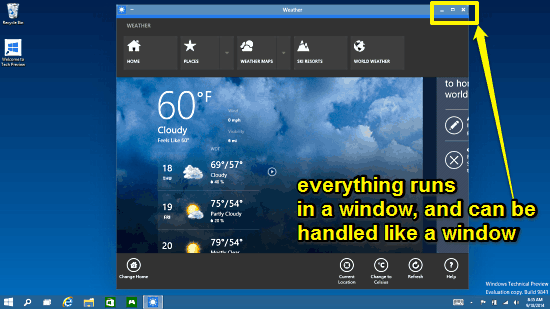 We all use our computers for a whole of stuff, and by that I mean varied stuff. From graphic designing projects and amateur recordings to family vacation photos and movie collection, our PCs hold it all. And since it’s never a good thing to mix work and play, it’s obvious this rule applies to our Personal Computers, because that’s where a large share of our work and play takes place. With Windows 10, Microsoft is finally bringing this to fruition. Windows 10 introduces the Multiple Desktops feature, that lets you create separate virtual desktops (or workspaces) for different purposes and projects. You can easily switch between multiple desktops via the switcher UI, and whenever you do it, Windows let you resume from where you left. It’s like having two different computers, one for work, and one for play, rolled into one. Friggin’ dope! 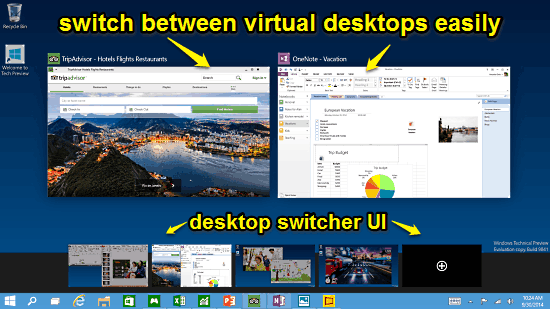 5. More Is Better, So Snap More Apps Together!

One of the most important and handy features introduced by Windows 8 let users snap multiple modern apps side by side, with all the apps running simultaneously. Personally, the ability to snap apps alongside each other is one of my favorite features, as it’s something that truly facilitates multi-tasking. With snapped apps, you can have a modern app and a traditional desktop program running at the same time, without having to constantly switch them. So you can video chat on the modern version of Skype, and browse the web, both at the same time. Windows 10 expands and improves upon this incredible feature to make snapping apps a lot more fun than it already is. With Windows 10, you will be able to snap up to 4 apps on the same screen, using the new quadrant layout. What’s more, the OS is smart enough to give you suggestions about filling the available screen space with other active apps. Cheers to productivity! 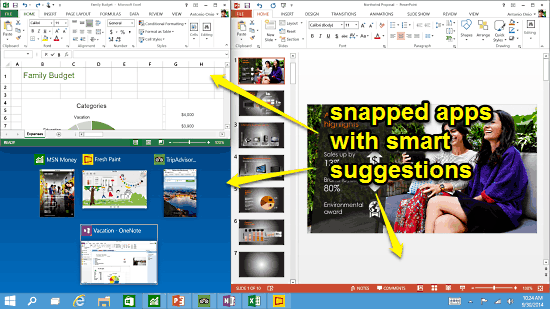 When Can You Expect To Get Windows 10?

With all of these super exciting features introduced in Windows 10, I’m sure everyone must be getting crazed to get their hands on the latest and greatest Windows OS as soon as possible. Unfortunately, you’re gonna have to wait a while fellas. Microsoft has just announced Windows 10, which means that an official consumer version won’t see its release until the later part of 2015. However, there will be a technical preview build of the OS available for everyone to download and try. If you’re impatient like me, I’d strongly recommend downloading and installing the Technical Preview Build, as it’ll provide a much better insight into what the future of Windows OS holds. However, just like any preview release, there will be bugs, and random features might get added or removed as the OS is improved upon for the official launch. This is just the beginning!

Windows 10 represents perhaps the biggest change to the Windows line of Operating Systems, ever since the first version of the OS was released to customers. At its core, it’s the same reliable Windows that billions of users across the globe have come to love, but at the same time, it’s a lot more different, and a lot more smarter. It’s a Windows headed into the future, while improving upon the legacy it has built for itself. Do download and install the preview build when it becomes available, to experience and find out more about the all new Windows 10.