This tutorial details how to play a slide show on lock screen in Windows 10. Being its natural successor, Windows 10 carries forward a number of features introduced by Windows 8, polishing them even further. One of the most important of these features is enhanced support for modern UI apps. In addition to that, the entire Operating System itself presents a coherent integration of both traditional and modern style elements.

One such feature is the lock screen, that is displayed before the login screen. As I’ve explained in one of my previous articles, the lock screen can display useful information such as temperature, unread emails, and other such notifications. You can also use a custom image to be used as a lock screen background.

How To Play A Slide Show On Lock Screen In Windows 10?

Having the lock screen in Windows 10 display a slide show of favorite images is a pretty simple task. The only requirement is that the images to be used for the slide show must be in the same folder. You can even use the images in the “Camera Roll” folder on the PC and OneDrive. Here’s a step by step tutorial, illustrating how to get things started:

Step 1: Open the modern Settings app, and click on  the Personalization sub-category. 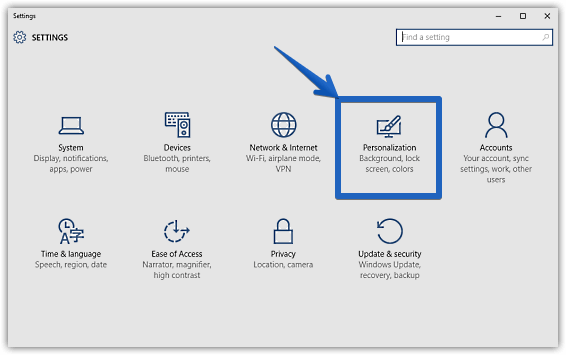 Step 2: From the options presented on the left, click on Lock screen. Now head over to the right column, and choose Slide show from the drop down menu corresponding to the Background option. Finally, Click on Add a folder to browse for, and select the folder that contains the images you want to use for the slide show. You can also configure some additional options at this point. Here’s a screenshot: 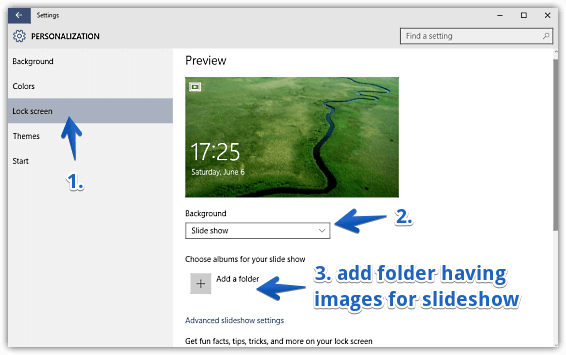 And that’s it! From now on, whenever you login to your computer, the lock screen will always display a slide show of your favorite images. Isn’t that great?

Related: Choose Apps That Can Run When Screen Is Locked In Windows 10

Windows 10 is arguably the biggest and most intensively re-imagined version of Windows till date. It offers a heck of a lot of features, runs on just about anything, and looks great. And as you’ve seen above, it’s also incredibly customizable. So what are you waiting for? Try this thing, and let me know what you think in the comments below.