IceCream is a free iPhone camera app to take photos and store them directly to the cloud. It helps you free up your iPhone’s space by backing up all your photos to the cloud (IceCream secure cloud) directly. The best part is that it leaves low resolution version of the photos in your phone as well, so that you can anytime see the photos. Those photos occupy very less space on your phone. Original high resolution photos can be downloaded from the cloud anytime you want. Best of all the worlds.

Another interesting feature of the app is that it actually comes with its own built-in camera. So, if you take a photo using its camera, the photo is automatically uploaded to its cloud, and optimized version of the photo is left on your phone.

The following screenshot shows the photos stored in the IceCream cloud. 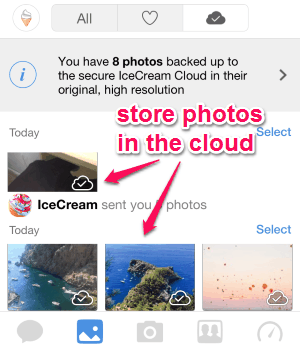 The app tells you that how much space you have left for taking photos and how much space you can free up by uploading your photos online. It comes with a built-in camera using which you can take high-resolution photos and store them directly to the IceCream cloud absolutely free. You can take more photos than usual, as all the photos taken by the IceCream camera will be stored in the app without eating up your iPhone’s storage. No more deleting photos, as you can use this amazing app to free up iPhone’s space by storing the photos to the cloud. It works exactly like other iPhone apps, which enable you to sync photos to the cloud.

Similar to the core cloud services, “IceCream” provides one of the best and secure cloud services for storing your photos. The most interesting feature of this app is that you can invite friends to view your photos or share your photos with them via email. You might have used many camera apps for iPhone, but this app comes with some advanced features, which the other apps lack.

How to Take Photos and Store them directly to the Cloud:

Download and install the app from the link provided at the end of this post or from the App Store.

Let us see the steps for using this free iPhone app.

How to use the built-in camera:

Simply tap the camera icon at the bottom of the app interface to open up the IceCream camera. This built-in camera captures high-resolution photos and stores them directly to the cloud. The camera has an option to toggle between classic camera mode and shoot-and-send mode. In the classic camera mode, the photos will be stored online if you’re connected to the internet or else the photos will be stored in your camera roll. But the shoot-and-send mode can be used to share your photos with others as soon as you capture them. The following screenshot shows how to use the built-in camera. 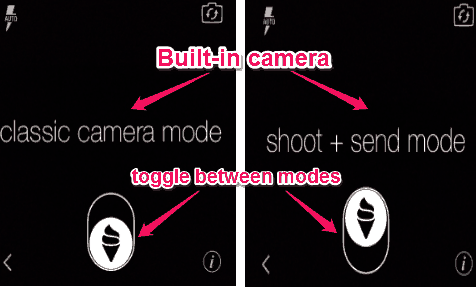 How to free up iPhone’s space:

The app tells you how many photos you will be able to capture with the available iPhone’s space. You can free up space by syncing your photos to the cloud and removing them from your camera roll. All of the stored photos in the app will be viewable even when you’re not connected to the internet. The resolution of the photos doesn’t get affected much and the photos remain beautifully optimized when you’re offline. The following screenshot shows the recommendation of freeing up space and number of photos which can be taken using IceCream camera. 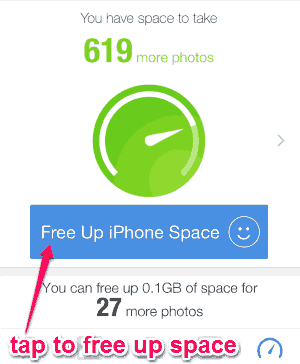 You can send up to 20 photos at once to your friends either by email or by inviting them (IceCream users) to your IceCream account. So no more saving photos to your camera roll to share them, as this app allows you to do so directly from the cloud after capturing a photo. When you invite others to your IceCream account, they will be able to see your photos and share their photos with you as well.

IceCream is definitely one of the best camera apps for iPhone to take photos and sync them directly to the cloud. It helps you free up iPhone’s space without losing your precious photos. Personally, I like this app because it allows us to view our photos even when we are not connected to the internet and also without affecting the resolution much.