This post lists some best free Android apps for group file sharing. Here these apps allow you to send files from one device to multiple other Android devices. Not just Android devices but one of the apps here can send files to other type of devices such as iOS and desktop. In these apps, you just need to create a WiFi hotspot and share files easily. Any kind of file can easily be shared with the following apps and in just a few seconds, all you have to do is just configure them. In these apps, you will see some other features as well that you will like.

There are a lot of file sharing apps for Android that you can use. But most of them can only send files to a single device only. So, in cases like after a party or trip where you usually have to share photos with all your friends then it becomes a pain because you have to share files with them one by one. To ease this, group file sharing comes in handy that the following apps offer you. With these, you can directly serve files from your phone and share with any number of people you want. These apps transfer files over WiFi so large files can be shared quickly and easily. 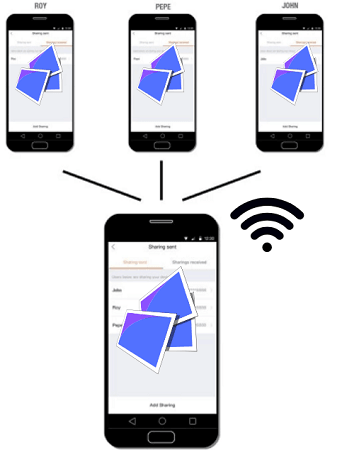 SHAREit is probably the most used app on Android and iOS to share files wirelessly. There are many features in SHAREit that you probably know about. But a lot of people don’t know that SHAREit comes with a feature called “Group Share”. With this feature, you can create a network and after other devices join your network, you can share files with them at the same time. This one to many file sharing feature of SHAREit is fast and very easy to use. In just a few taps, you can create a network and let others join you.

Apart from Group Share, you can use SHAREit’s web share feature to do the same thing. But that can be exhausting as you have to deal with the IP and WiFi part a lot. Which is why the Group Share feature of SHAREit is one of the best for one to many file transfer. Below are the steps to use SHAREit’s Group Share to send multiple files from source Android phones to target devices.

Step 1: Open SHAREit and then from the top right side of the app, select the “Group Share” feature. After that, you will see two options there; one for creating a shared network and other for joining a network. 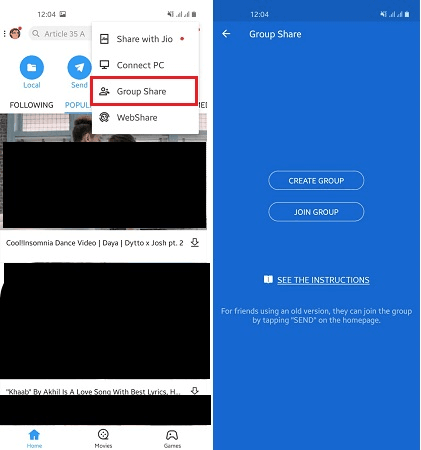 Step 2: If you are one who wants to share files from his phone then simply select the option “CREATE GROUP”. After that, it will create a WiFi with some random name and will generate the password too. Other people around can join this network by manually connecting to the WiFi using the password. Or, they can connect by scanning the QR code that can be seen at the top right side of the same screen.

Step 3: Now, when all the devices have joined your network, you can start sharing files with them. Just select the files from your phone and then hit the Send button. The selected files will start downloading in all the connected devices. And you can share anything that you want with the help of this feature. 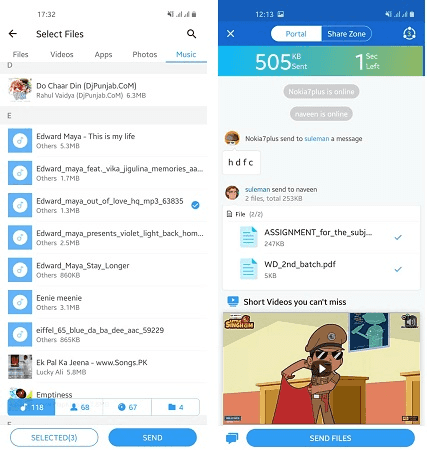 In this way, you can use SHAREit for group file sharing with ease. All you have to do is just use a few taps and then you are simply done. You can use this feature anytime after a trip or party to share pictures from your phone with your friends. This features will definitely save you a lot of time that you’d have wasted in transferring files to different people in a sequential manner. 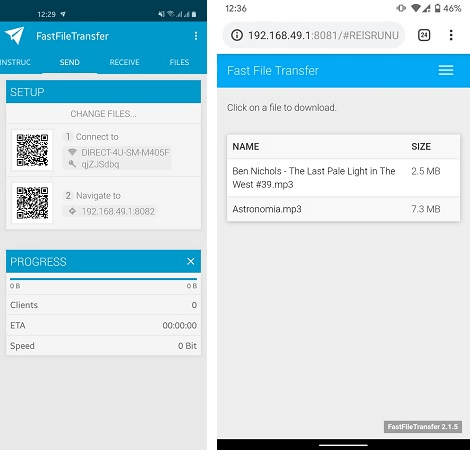 FastFileTranfer is another free Android app that can be used for group file sharing. This app works like other apps that I have mentioned here but uses fewer steps. It first takes files from you that you want to share and then create a local network to serve them directly from your phone. It generates two QR codes; one for letting others connect to your network and others for sharing the URL where the files are hosted. In just two steps, you can easily share anything from your phone with others quickly.

Get this app from the above link and then install it. In the beginning, it will ask you to set a password for the WiFi hotspot that it will create to let others join you. Next, you go to the Send section and select all the files that you want to share with others.

After selecting the files, it will automatically create a hotpot and will show its credentials along with the QR code. And with the WiFi QR code, you will see another QR code that is nothing but URL that target users have to enter in their address bar. So just us any QR scanner app and then download the shared files. Simple as that. 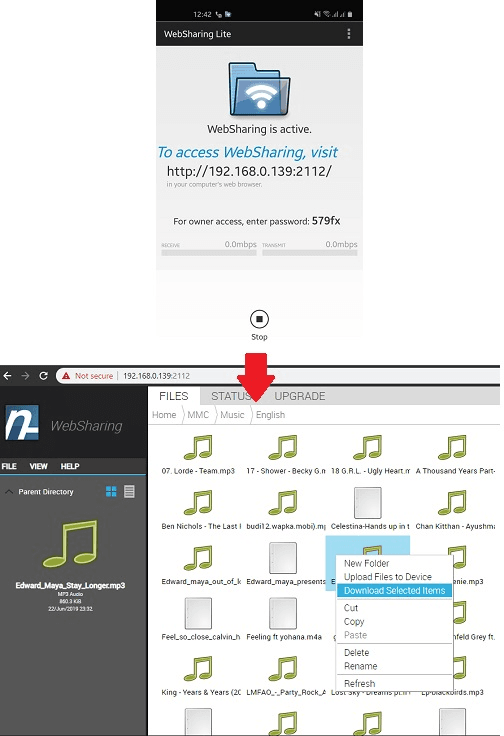 WebSharing Lite is a free Android app that uses web share like feature to let you share files from your phone to any other device. Basically here it lets you share the file manager interface to the other user. And the end-user can download the data from it by browsing any folder. The best part about this app is that it not only lets other users browser your files but the end-user can upload files too. All the data transfer happens over WiFi and all the devices which are taking part in the data transmission need to be in the same network.

You can simply get this app from the above link of the Play Store and then you are done. All you need to do is just open the app and start it. It will start at a specific port and on a local IP address that can be accessed by any device in the current local address. The best part is that the app is not required to be running on other devices. You only have to install this app on source Android device that will serve files over the WiFi.

After you have installed the app, you only have to start it. It will reveal a specific socket address that you have to type in the address bar of the other devices in the same network. The file manager will open up in the browser and the end-user can get the files he wants. No matter what you want to share from your phone, you can do that. Also, during the file transfer, it asks for a password and only then a target user can browse the file.

These are the best free Android apps I could find for group file sharing. Use these to instantly share anything to multiple devices at once over WiFi. And there is a good thing in some of these apps then you don’t really need them to be installed on the target device. So, if you want to share something from your phone to multiple people then you can install any apps from this list. So many people already have SHAREit installed on their phone so they can use the group share feature. Otherwise, you can give a try to the other two apps I have mentioned.