SideControl is a free Android app to add sidebars and gesture controls to Android. The app enables three “hot” areas on your phone: Left, Right, Bottom. With each area, you can configure 5 gestures each (8 in paid version). So, you can configure a total of 15 gestures.

So, the app actually lets you do a lot. Once you have configured it completely, you just need to perform the gesture on the area of your choosing, and the assigned action will be performed. For example, you can configure things like: double clicking on left area enables torch, long slide on right area brings up recent apps, and so on.

Of course, the more the gestures you setup, the more you’ll need to remember ;) 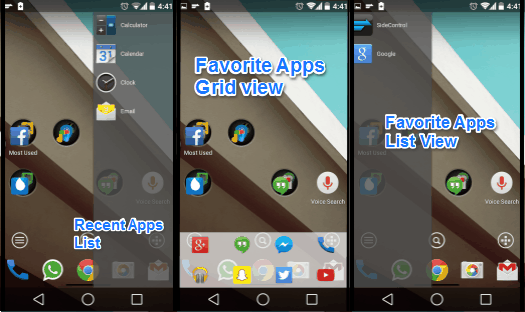 I have a couple of apps that I need to access throughout the day. But putting all of them on a single screen would have led to a cluttered mess of a home screen. That’s where SideControl came to the rescue. Available for all Android devices (v 4.0.3 and up), SideControl works perfectly on a budget device running Android JellyBean 4.2.2, to my Nexus 5 running Android L developer preview. This thing makes you quite productive, and yeah, it’s fun to use as well.

SideControl : Add Sidebars and Gesture Controls to any Android device

Installing SideControl is a pretty routine affair. Just download the app from the Play Store (link at the end of post), and you’re good to go. On its first run, it directs you to a video that demonstrates its capabilities. Once you’re through with that, you’re led to the app itself. It features a variety of controls that let you configure the Sidebars and Gesture Controls to your liking. However, make sure that SideControl keeps running in the notification bar, or else it’ll close abruptly. 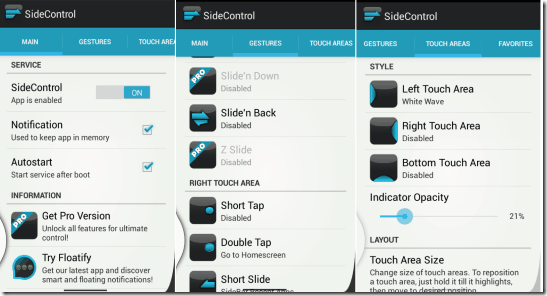 SideControl’s USP is customizability. There are a lot of options, and then some more. If you have a rooted device, you can get some more features by installing the Xposed Framework on your device. 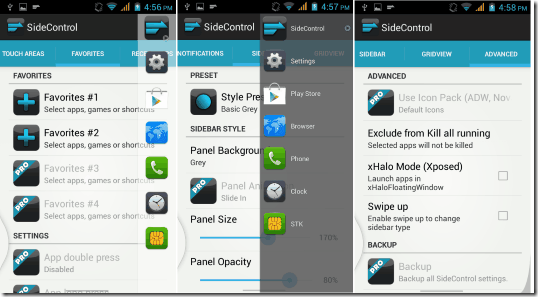 How to Add Sidebars to Android with SideControl:

Once you have completed the quick and useful tutorial, you will be taken to main configuration section of the app. At the top, you will see an option which says “SideControl app is disabled”. Slide that to “On” position to enable the app. In this section, you will also see an option for “Autostart”. It will be a good idea to enabled that as well. Also enable “Notification” (this will ensure that the app keeps running). 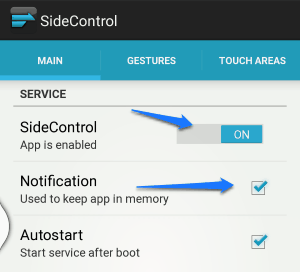 Now that the app is enabled, let’s start setting up our gestures. As I mentioned above, the app supports 5 gestures for each area in free version. And there are three areas for which you can set gestures: Left, Right, and Bottom. So, in all, you can configure 15 gestures can be configured!

Choose Sides Where you want Gestures to be enabled:

But first, you need to head over to the Touch Area Tab. This is where you choose what sides you want to be active and their sensitivity, appearance etc. So, Choose from three sides and set their look. I recommend the Bottom Corner look for the side edges and Black Line for the bottom edge. Then long press on the side touch areas and drag them down one by one. This will make the UI completely unobtrusive. Turn down the Indicator Opacity and turn up the Touch Area Size. 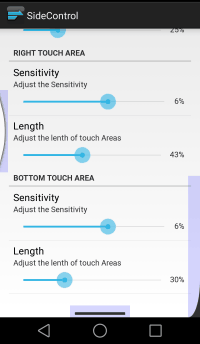 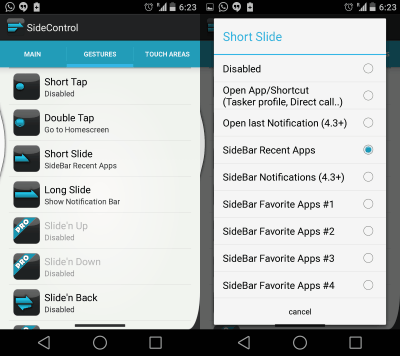 To configure gestures, click on “Gestures” tab. This tab will show you all the gestures for all the areas. Assign an action to a gesture or disable a gesture from here. Choose from options like slide, tap, double tap etc. 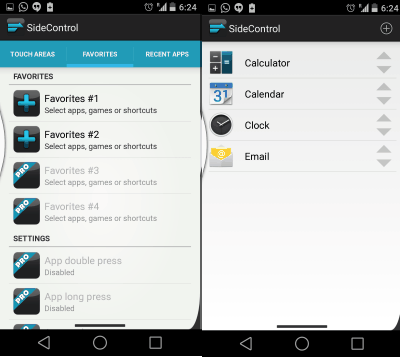 The free version of SideControl lets you have two sets of favorite apps/shortcuts. To create these groups, head over to the Favorite Tab and start adding apps to the sets. 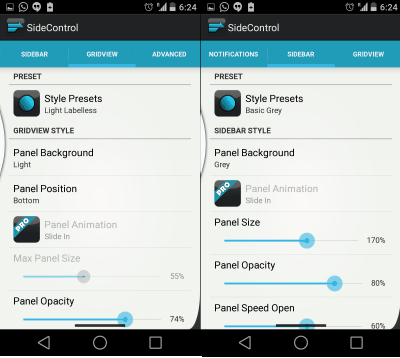 Customize the look of your Sidebars and Gridviews over at their respective tabs. Choose Light Labelless  for a clean appearance or I like White for a bold one.

Blacklist apps from appearing in the Recent List from the Recent Apps Tab.

SideControl adds a large number of functionality to your screen sides. What’s more attractive about the app is its customizability. The only thing annoying about the app is the persistent notification needed to keep the app running in background. However, if you want to jump between apps with a single swipe, this is something you should definitely try out. I think you’ll find it quite handy.

Get SideControl from Play Store or use the QR code below: 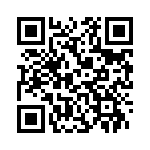