It is extremely important for LinkedIn users to determine if the person who is trying to connect with them is a real and genuine connection or a scammer who is out to steal your information. Lately, this issue has become very prominent and a matter of concern.

As per an article published in Sept. 2022 in MIT Technology Review, millions of bogus LinkedIn profiles that have been spotted were trying to ensnare unsuspecting users in scams. Scammers often attempt to connect with others through lines of connection such as certain common work experience, same hometown, similar emotions of loneliness while residing in a foreign country and more. Once the connection is established, the scammers lure the users into crypto investment scams etc. Based on authentic research, it has been commonly observed by MIT that victims on LinkedIn platform tend to lose more money as compared to the victims of scams on other platforms.

In addition to the above menace, it was also found that databases of LinkedIn user information comprising millions of records were being pitched to probable buyers on the dark web. On investigation, it was revealed that the information had not been acquired through hacking, but using a process called data scraping which many platforms are requesting to be outlawed by the legal authorities.

Concerned about the prevalence and rising incidence of such occurrences, LinkedIn has come up with a vital update / feature to its security apparatus so that you can find out whom you can genuinely connect with and who should be avoided. This is how it works:

1. Open your LinkedIn app on your device.

2. Load the profile of the person in question.

3. Tap on the 3-dots icon next to the ‘Message’ button

4. From the pop-up that appears, select ‘About this Profile’ and important information will be displayed on when the Profile was created, when it was Last Updates and whether the User has a registered (verified) Email or Phone number. 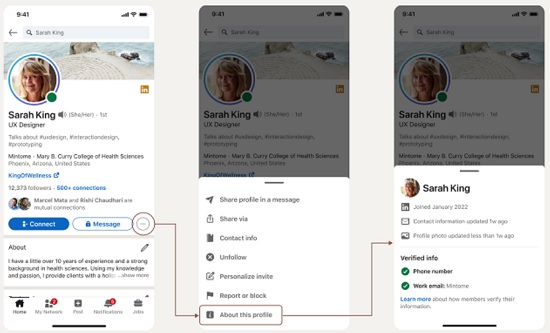 This information can help you to differentiate between a genuine LinkedIn user and a Scammer who is out there to steal your personal info. Additionally, LinkedIn has also enhanced its Machine Learning and AI algorithms to better detect profile images that may have been created by an AI Image application.

The new feature has initially been rolled out only to a selected number of users. LinkedIn plans to launch this to a wider audience in the coming weeks.