When it comes to cartoons even adults become kids. Most of us love cartoons which we used to watch as kids, or which our kids watch now. Tom and Jerry is one cartoon which has been and still is very popular among kids. We used to watch it when we were kids and still watch them with the same enthusiasm. Tom and Jerry cartoons are really hilarious and make you want to watch more and more. Both the characters of Tom and Jerry are so cute, that you are not able to decide whose side to take. And the constant battles between them are pretty fun to watch. So today we have compiled a list of apps in the Windows 10 store which offer you these Tom and Jerry cartoons to watch for free. 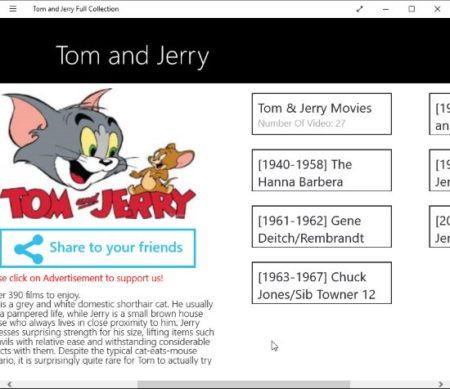 Tom and Jerry Full Collection is a nice app to watch this popular cartoon. All the cartoons are listed in the app under different headings as can be seen in the screenshot above. There are about 390 cartoons videos which you can watch through this app. Click on any heading and all the videos under that will be listed in front of you. You can start watching any video from that list by just clicking on it. The video will start playing in the app window itself. You can rewind or forward the video if you like, go to next or previous video in the list and the video will have all the standard controls like play/pause, volume, etc. 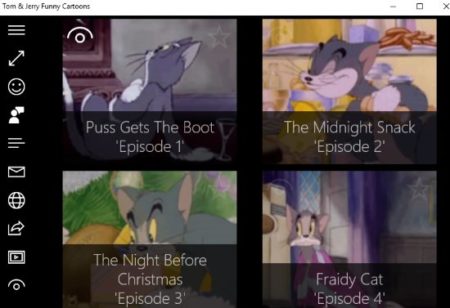 Tom & Jerry Funny Cartoons is a good app to watch this cartoon as well. When you start this app you will see all the cartoons listed on its home page, as can be seen in the screenshot above. The app has over 150 cartoon videos that you can watch and enjoy. You can click on any video and it will start playing in the app window itself. The video player has play/pause and volume controls. To forward and rewind the cartoon there is a slider given. You will also get an option to cast the cartoon to another device like TV. The cartoon can be seen in full screen mode and you can also pin your favorite videos to the start menu. You can also upgrade to the paid version of the app to remove the ads from the app. 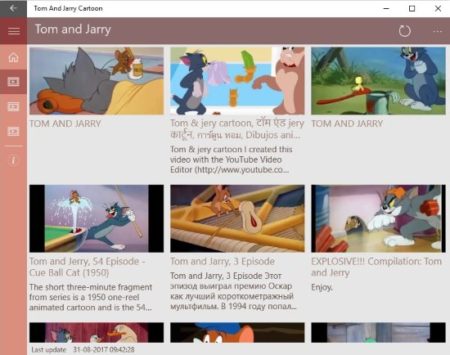 Cartoon Tom and Jerry is another app to watch this popular cartoon series. The home page of the app will list all the cartoon videos available under this section. Though the name of the mouse is misspelled in the app, but we can totally ignore that, as we are getting to see our favorite cartoons online. When you click on a particular video the video will start playing immediately in the app itself, as shown in the screenshot below. 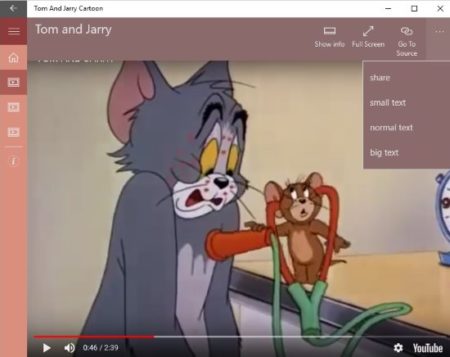 The video player has standard controls like play/pause, volume, forward and rewind videos. Additional options that you will see on the top of the screen are show info about the video, go to source, make video full screen, etc. Lots of cartoon videos to watch and enjoy them. 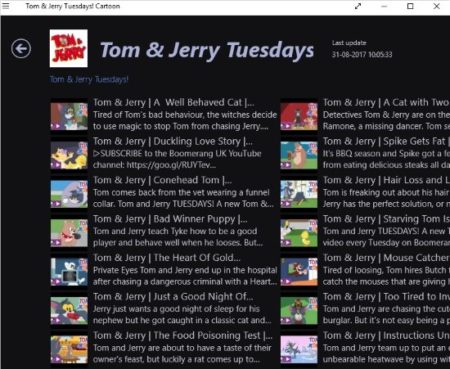 Tom & Jerry Tuesdays! Cartoon is a fun app to watch this popular cartoon. The home page of this app which can be seen in the screenshot above has all the cartoons listed. You can click on any of the cartoon videos, to start watching them. The video will start playing the app window itself. The video player window can be seen in the screenshot below. 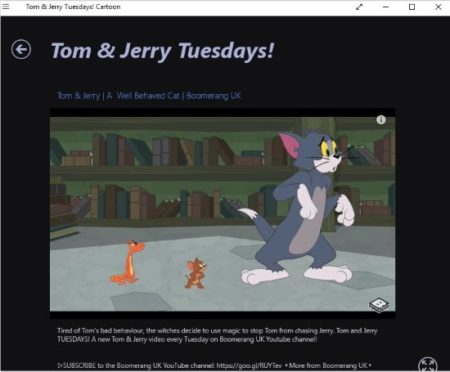 The video player has all the standard controls like play/pause, volume control, forward or rewind the video, etc. You can even share this video with your friends and add it to a watch later list as well. The app has limited videos, but the cartoons are really enjoyable. You will have a lot of fun watching these in the full screen mode.

These are the 4 Windows 10 apps to watch Tom and Jerry cartoon for kids. All the apps have a good collection of cartoon videos which you can enjoy anytime. Tom and Jerry is a very popular cartoon among kids and even adults. So having apps on your device which allow you to watch them at your own discretion is something we all would love. You can try out all the apps in this list and see which one you like more.