The article lists 5 free car racing games for Facebook to test out your driving skills. Car racing games are always fun to play. You can test out your driving skills with the race simulation games and race with other online users in some games. The graphics and background sound of all the games is good. Some of the games also offer you short tutorials at the beginning of the game to make you understand how the game is working.

Let’s look at these free car racing games for Facebook below. 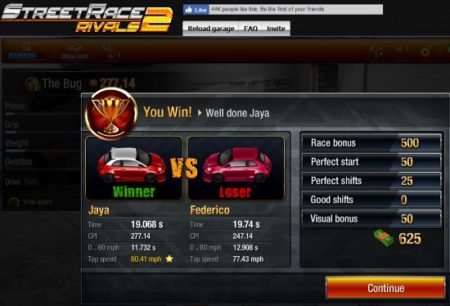 Street Race Rivals 2 is a free car racing game for Facebook. In this game you start with a small tutorial to get you acquainted with how the game works. Then you can go ahead and buy your own car to compete in races. Once you have bought you car, go ahead and start racing. While racing just keep in mind that you have to speed up and shift gears at the right time to get maximum benefit. You also have a nitro button which will give extra speed boast when pressed.

Once you are done with the tutorial you can have a real race against other online players. A result of one such race can be seen in the screenshot above. Each race you have will give you money upon winning. This money can then be used to upgrade your car. 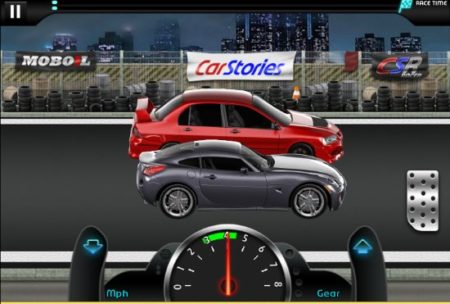 Car Stories Racer is a free car racing game for Facebook. This game starts with a short tutorial to get you acquainted with the game play. In the tutorial you are shown how to start a race and how to shift gears to pick up speed. After the tutorial you will be asked to buy a car if you want to participate in the races. Use the coins you have in your account to buy a car and then you can start racing. Participate in the races and you will be randomly paired with someone.

As you can see in the screenshot above, you are ready for a race. You have a opponent who you will be racing. Click the paddle icon to start the race on go. Then click the gear shift to pick up speed. You will earn coins according to your wins. You can also upgrade your car using the coins that you win in races. 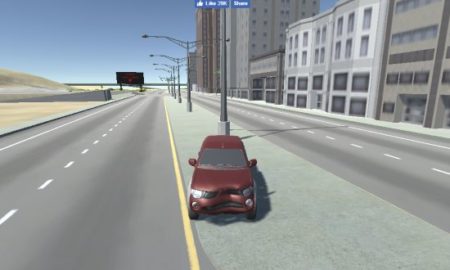 Racing in Cars is a free car racing game for Facebook. In this game you do not get much options at all, apart from racing a car here and there. This game looks more like a driving simulation game, where you can get some driving practice from driving on empty streets. The landscape shown in the game is pretty empty because there are no cars around. Just some buildings, road and dessert. You get a car which you can drive around the empty streets easily. The car can be controlled by using the arrow keys. Just try to keep the car on the road and not collide with things.

There is nothing apart from this that you can do in this game. But if you feel like racing a car on empty streets, and get some driving practice then you would definitely have fun playing this game. 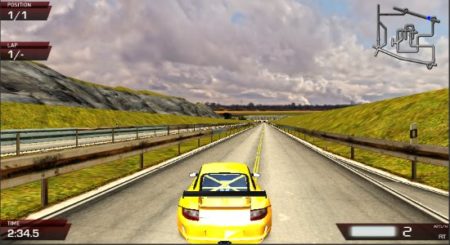 Racing Simulator is a car racing game for Facebook. In this game you get the option to select the car of your choice from the ones given. Press the enter button to select the car of your choice. Once you are done selecting the car then you can either take it for a test drive or participate in a race. You can start with test driving the car so you can understand how the car works and how to control the car.

Test driving the car will let you practice in various scenes. You can pick out the one in which you want to practice. After you are done with the practice run then you can go for an actual race in a similar manner. For checking out options you can select the “o” button which will bring up options. The “x” button can be used to restart a race. The arrow keys are used to control the cars movement. 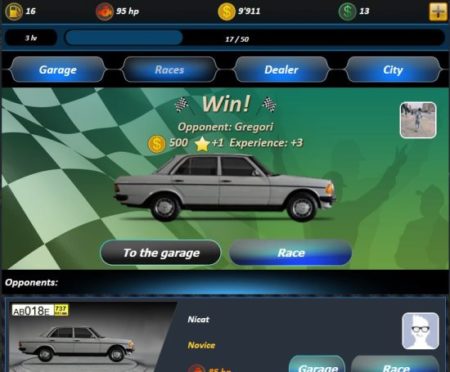 Super Racing is a the last game in this list of car racing games for Facebook. In this game you do not have any animation. But you can race against your opponents. You start the game with choosing a car. You have to buy a car with the money you have in your account. After buying a car you can begin races. You can race with other online players who are on the same level as you. If you race with some one on higher level you will lose. So start with competing with users in the same level.

Just click the race button given in front of an opponent. This will show you the race result on top of the screen, as can be seen in the screenshot above. You can go to the garage button and upgrade your car to win more races. For upgrading the car you can also complete various tasks that are being offered to you. Various tasks offered bring you more money, experience points, etc.

These are the 5 free car racing games for Facebook which you can play to test your driving skills. All the games are fun to try out. The one which I enjoyed playing the most is Street Race Rivals 2. The game has nice graphics and is fun to play. So try out these games and see which one you like.