After creating a shortcut, if you move the original file, the shortcut won’t work anymore. This is because the shortcut is created before moving the file so it targets the old path where it can not find the target file. So, in order to make it work, you either have to replace the target path with the new one or create a new shortcut. Both these options are easy and quick for a single or a few shortcuts but not an ideal approach for a large number of shortcuts.

Also read: How To See DLLs Of Running Processes On PC

How to Bulk Replace Target Path in Shortcuts on Windows?

LiNK Fixer is a portable Windows program which is around 500 KB in size. Being a portable program, it saves you from going through the installation process. You can just extract the downloaded ZIP and run the program directly.

When click, this program opens in a small window containing the following three options:

After entering the following information, simply click the “Do it!” and it will replace the target path in each shortcut saved in the respective folder. 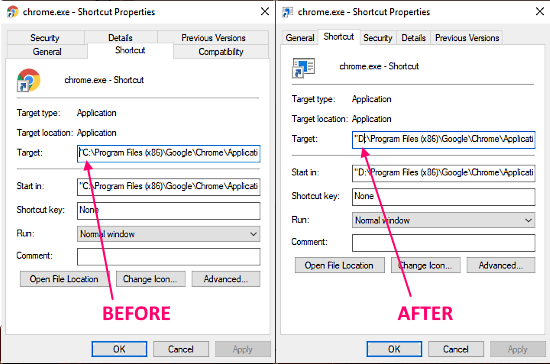 Let me explain it with an example. Initially, Google Chrome on my Windows computer is installed in C drive. So, the Chrome shortcut targets to the C drive. Now, let’s say I moved the entire C drive to D drive. Doing this will break the Chrome shortcut since it directs to the C drive. So, to fix this, I simply replaced the C drive with D drive with this program and it changed the target path for the shortcut. I used the drive to demonstrate this, you can use folder paths to replace the target location.

LiNK Fixer is a handy little program that can save you lots of time fixing the shortcuts. It is one of the easiest ways to fix the broken shortcuts when the original file is moved. All you have to do is define the old and new paths and it will replace the target path in all the shortcuts. So, if you use shortcuts in Windows, give this program a try.