Windows 10 Shooting Range Simulator Game app does exactly what its name says, it offers you the exact environment of a gun shooting range. So if you enjoy gun shooting or sniper games, then you should definitely try this app out. You will also get a huge choice in weapons in the game. Test your shooting skills with two different playing modes normal and hard.

The Windows 10 shooting range simulator game app can be downloaded from the Windows 10 store or from the link given at the end of this article. When you start the app you will come across an interface like the one shown in the screenshot below. 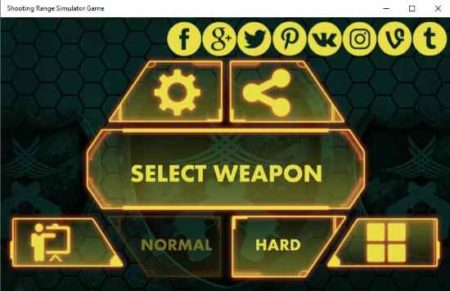 On this page you can go ahead and click the select weapon button. The normal mode is automatically selected by default. So lets start by selecting a weapon of our choice out of many. The weapons selection screenshot is given below. 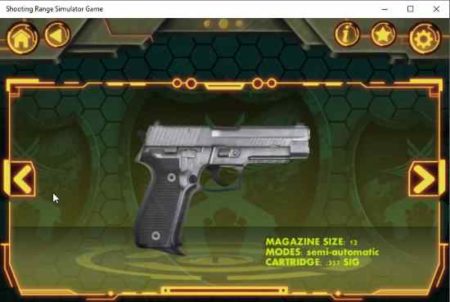 The forward and backward arrows on either ends of the page allow you to go to next or previous weapon in the list. Just scroll through all the free weapons, as there are some locked weapons also which can be unlocked by upgrading to the paid version of the app. The app is also ad supported, but the ads are not annoying at all. Once you have selected your weapon, you will be directed to a screen like the one shown in the screenshot below. 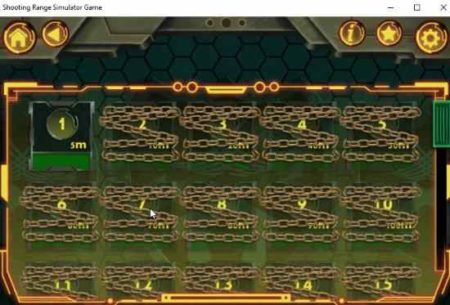 This screen shows you all the levels in the game, out of which only the first level is unlocked. You have to clear the first level successfully to move on to the next level and so on. So let’s start with level one game play by clicking the level one tile. Now you will see a screen like the one shown in the screenshot below. 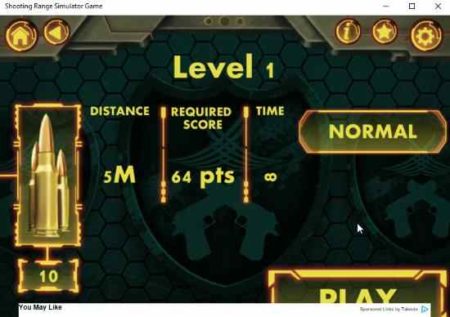 This is your level one game summary, it shows you your target which is 64 points. There is no time limit in the game and it shows that you are playing in the normal game mode. Click the play button to start the game. Now you will be shown the game play screen as shown in the screenshot below. 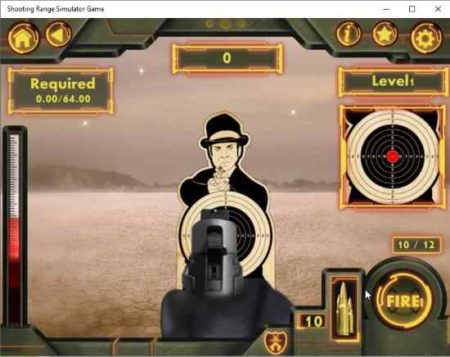 Take your aim by moving the gun around and pointing at the right direction. Your aim is to hit the bulls eye, the red dot in the center of the board. When you have taken your aim, go ahead and click the fire button. On the right side of the screen there is a close up or zoomed in version of the target you are shooting at, which shows where did your bullet hit exactly. Your score is calculated according to the location the bullet hit the target at. You get 12 bullets to fire after which your total score is shown and a level up screen comes up. 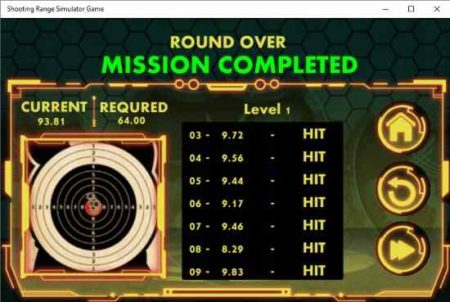 The above screenshot shows the level completed screen. Which shows the required score and the current score of yours. Now you can move on to the next level by clicking the next arrow button.

Shooting Range Simulator Game is extremely fun game app which will put your shooting skills to test. The graphics and gunshot sound effects are quite realistic and increase the excitement during the game. The choice of weapons is also pretty good and you will feel like you are shooting a real weapon. Playing this simulation game was very exciting and I would definitely recommend you to try it out.