Heart Box is a Windows 10 physics puzzle game app with a cute little robot named Robby who has to constantly charge his weak battery. You have to make sure that where ever Robby is, it has to be dropped inside the heart box for charging. The game has lots of levels to play with lovely graphics. There are lots of objects in the game which can help you reach your target.

The Windows 10 physics puzzle game app can be downloaded from the Windows 10 store or from the link given at the end of this article. When you start this app you will see an interface like the one shown in the screenshot below. 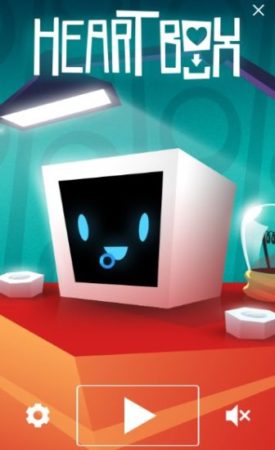 The settings page of this app lets you reset the game and start all over again from the first game. Apart from that you can also change the language of the app to one you are comfortable with. 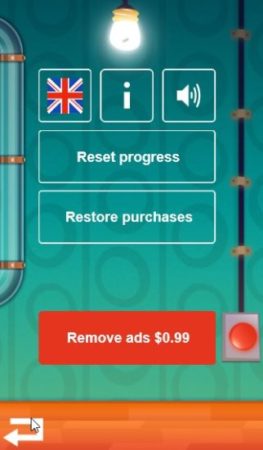 You can also remove the ads appearing in the app by upgrading to the paid version of the app. Return to the home screen and click the play button and you will be shown all the levels in the game, as shown in the screenshot below. 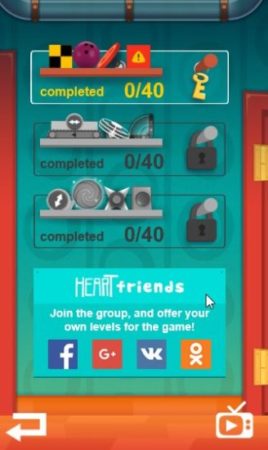 Each level has 40 games each in it with different objects to help you out. Some of the objects which help you out are cubes, balling ball, spring trampoline, fan, dynamite, moving platform, laser, portal, switch, etc. Start with the first level and first game in it, which will come in front of you as shown in the screenshot below. 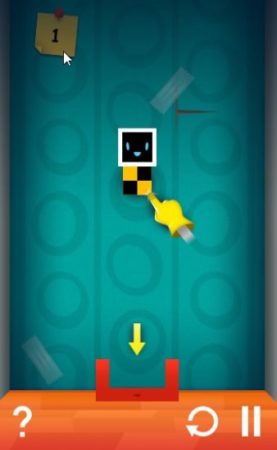 You need to drop the robot Robby in the box shown in the screenshot. For this you have to remove the black and yellow tile just by clicking on it. The level you are on are indicated at the top of the screen. The question mark button gives you hints in case you are stuck in a game. You can also reset a level to start from the beginning if you are not able to solve it. 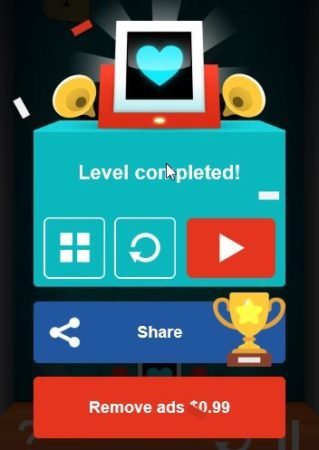 The level up screen will look like the screenshot above. You can just click on the play button to move on to the next game.

Heart Box is a fun game app which will prove to be quite addictive. I started playing the game and kept playing for long. All the levels have the same objective to drop the robot in the box. Some levels are more tricky then others. But there are different objects that will help you out to achieve this objective. Initial levels you will find quite easy, but as you move forward the games get challenging.