Here is a free automatic MySQL, PostGreSQL, MongoDB database backup tool. It runs on your server or PC as an agent and then you can leave the rest on it. You can periodically backup your database to a secure S3 bucket and you can easily restore that again. It encrypts your database before backup and you will need a private key to decrypt it again but don’t worry it handles the decryption part itself. Here it runs in your server as service and executes itself as a cron jobs to run at specified schedule. It works with MySQL, PostGreSQL like databases and you can easily configure it.

In the free plan of dbacked, it lets you do unlimited backups and unlimited retention. But in the free plan, you will have to use your own S3 bucket to save the backups. There is just a simple executable file that you have to run via command line to set it up and then you can install it as a service. After that, it will automatically keep backing up the specified database and you can restore it anytime you want.

Dbacked is an open source tool as well that lets you backup your databases. And it is meant for advanced users to backup their databases automatically. If you don’t know anything about servers and databases then it will look very difficult but actually it is very easy. You just have to run the agent once and then it will keep running automatically.

After opening the terminal run the following commands explained in various steps to download, install and use it.

Step 1: Run these commands to download dbaacked and give it the permissions for execution.

Step 2: Now, it’s time to install the agent and configure it. In the beginning, it will ask you to create a server name, create an encryption key.

Step 3: Now, it will ask you to fill the S3 credentials. For that, you will need the account ID and API key. Also, you will have to specify the region name. it will verify your credentials and then it will proceed further.

Step 4: After S3 configuration, it will ask you to enter the database type and details. You will have to specify which database you want to backup. And then you will have to provide the corresponding credentials. And in the last, specify the cron expression to run the backup command automatically.

Now, in the end, it will configure the agent and start it. It will keep running in the background as a service and will keep backing up the database. And when you want to restore the backup then you will have to use the following command and rest of the process is similar. 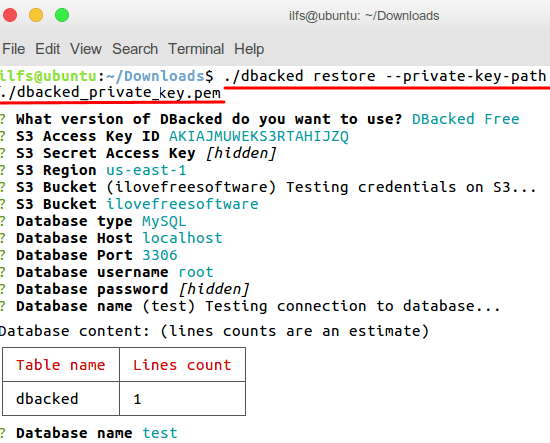 Above, you can see how to use simple command line tool to backup databases. You just have to put an effort in the beginning and then leave it on its own. It will keep backing up the database and you can restore the backup whenever you want.

Dbacked is a simple and a nice tool which you can easily use. Install this agent on a server or a local PC and backup databases like a pro. Databases should be backed up regularly for protection of the data. And you can easily do that with this tool. And this post will help you in getting started with it.