Yik Yak is a free application for iPhone and iPad that allows you to share your jokes, messages, rumors, gossips etc. via a common platform. Yik Yak is a social network meant mainly for students who want to spread a certain news as quickly as possible in their local bulletin board. Yik Yak according to the developer, as the name suggests, is a community because yaks walk in groups. Also, there are very strict rules against abuse of the application. You may get banned from the community. Yik Yak has plenty of options to search for the news/texts/jokes which are called ‘yaks’ here. 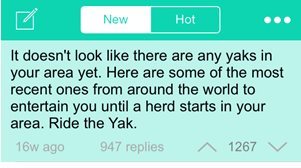 Yik Yak is like a bulletin board for spreading any type of news/jokes/gossips amongst your nearest communities. Yaks are displayed in the form simple texts just like Facebook statuses. Whenever you click on a Yak, you can view the location from where it is posted. You can also like the yak and reply to it. People can also upvote your replies. You can also share the Yak if you want to. Yaks can also be filtered according to ‘new’ and ‘hot’. Yaks can be viewed in multiple categories. 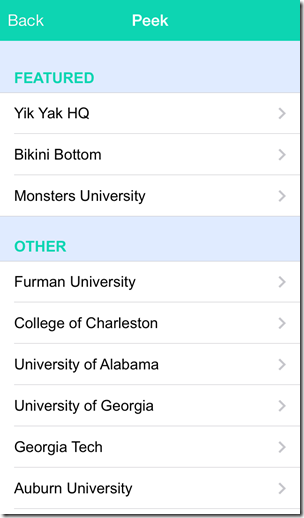 In the Peek option, you can choose the location of the Yaks. In this section you can decide which area’s Yaks you want to see. Yaks in this section are divided according to the college names. This allows a person to search for his own college (although the number of colleges is very limited) and read the bulletin related to that.

Finally, there is a section which contains information about your Yaks. In this section, you’ll find your most recent Yaks, your top Yaks and your Yik Yak handle. Yik yak handles are a way to sign your Yaks from time to time. It is something a person uses after writing a mail in Gmail etc. It is just to give a recognition to a particular Yak stating that it belongs to you. 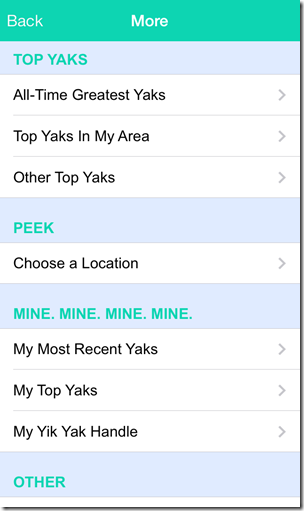 There are many options available in the app store for social networks like these. The problem with these social networks is that they are not interesting until all your friends are on it. Same is the problem with Yik-Yak. When I tried to search for Yaks in my area, I was unable to find a single Yak which was very disappointing. Otherwise, once your community gets involved with this, the concept behind is pretty good.

Get Yik Yak for iPhone free from here.