Laugh.ly is a free iPhone app to stream and listen to 400+ standup comedians. It features world’s most popular comedians like Sarah Silver, Aziz Ansari, Kevin Hart, Amy Schumer, Louis CK, Brian Regan, Christopher Titus, Jim Gaffigan, Steven Wright, and more. It offers one of the world’s largest comedy library where you can explore tons of trending comedy albums, comedians, new releases, editor’s choice, channels, etc. which will probably be enough to make you laugh out loud (LOL). You might have used various radio apps for iPhone to listen to songs, news, and more, but Laugh.ly also brings you radio channels which are completely inspired by standup comedians.

Laugh.ly also allows you to sort the files (comedy sets) by topic, comedian, genre, trend, and by letting the app pick comedy files randomly for you to stream. If you find any of your favorite comedians, channels, or jokes hilarious which you would like to listen later, then you can favorite them. You can even share your favorites with others via WhatsApp, Facebook, Twitter, etc. to spread happiness and smile. 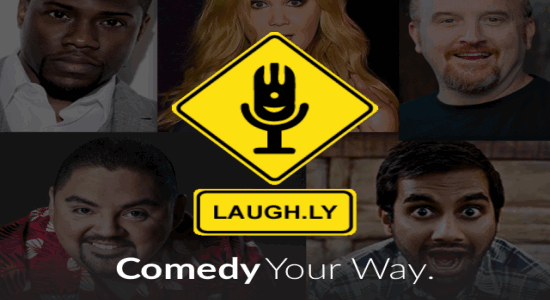 Note: Laugh.ly is also available for Android smartphones, but I have only reviewed the iPhone version in this post.

Using Laugh.ly to Stream and Listen to 400+ Standup Comedians:

When you open up the app, it will ask you to sign in using your email id or Facebook credentials. After that, the “Home” screen will appear where the comedy sets will be listed in various categories: Recommended For You, Trending Comedians, Trending Albums, Comedian Radio, Top Channels, New Releases, and Editor’s Choice. 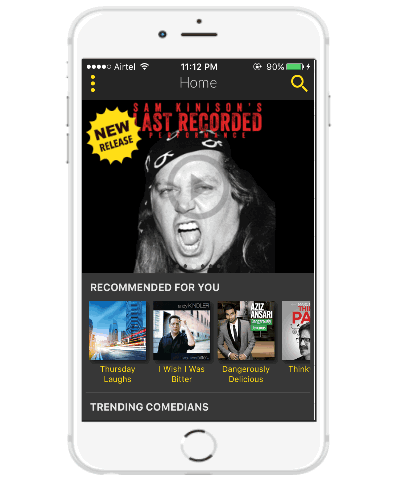 You can now browse all these categories to find and listen to your favorite comedy sets. To stream and listen to any set, all you got to do is tap on it and the built-in media player will pop up which is quite similar to normal media players for iPhone. You can control the playback as a typical music player, which means you can play, pause, play next track if played an album, play previous track, shuffle, repeat, etc. 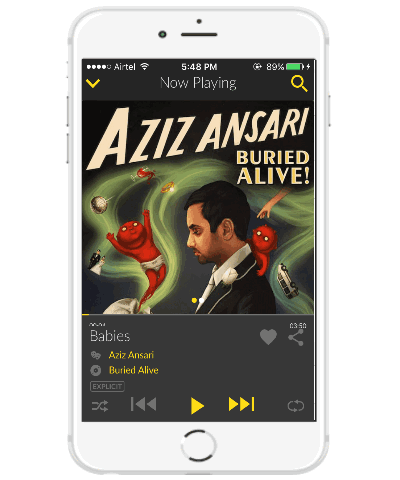 While listening to a comedy set, you can also favorite and share it with others via Facebook, Twitter, WhatsApp and more, right from the built-in player. 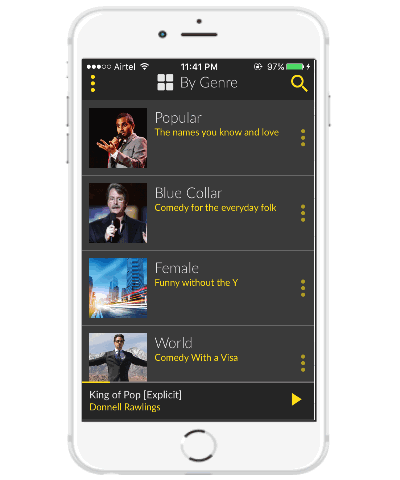 Another interesting feature of this comedy app for iPhone is that if you would like to quickly play a joke or set from your favorite comedian, then instead of going through all the categories you can use the search function to access it quickly. You can search for jokes, comedians, albums, radio channels, etc. 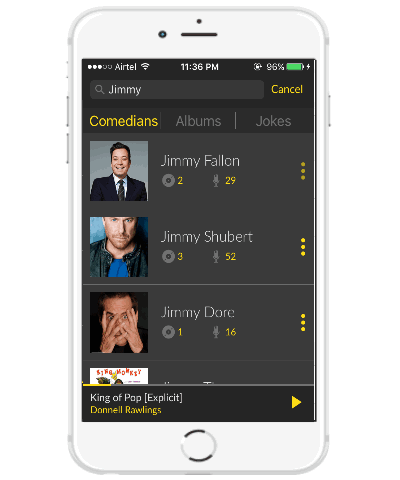 If you’re a comedy lover like me, then you will love this app as it lets you listen to all the hilarious comedy sets by world’s most popular comedians like Kevin Hart, Amy Schumer, Louis CK, Sarah Silverman, Aziz Ansari, and more. Personally, I like this app as apart from letting you listen to tons of comedy sets, it also brings radio channels inspired by standup comedians. So, install the app right away and put a smile on your and others face.