In this post, you will learn about 5 free reverse video apps for Android to make reverse videos. You can use these apps to pick any normal video and then automatically get it converted into a reversed video. They manipulate the video by changing the playback from the last frame to the first frame. You can either import a video from your gallery or use the built-in camera of these apps to record a new video. After that, all you gotta do is press a button and the rest is done by these apps automatically.

Some of these also allow you to change the playback speed of the reversed videos to make them play faster or slower. In some of the apps, you will also find the option to keep the original audio or add your own music. When you’re all set with creating a reverse video, they will allow you to save and share it with ease. 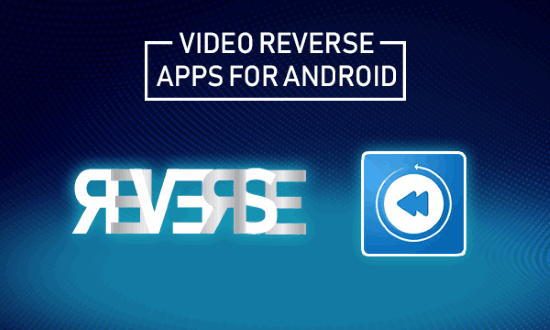 Now, let us talk about the reverse video apps. 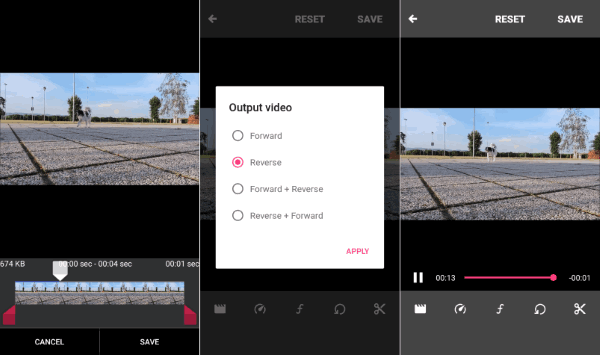 Boomerate is one of the best free reverse video apps for Android using which you can easily make reverse videos. It lets you select any video you want and then reverse it in no time. For that, the first thing you need to do is open the app and then record a new video or import from your phone gallery. After you do that, it will allow you to trim the video by setting a start and end point. Then tap on the “Video Style” icon at the bottom and select the “Reverse” option.

After that, tap on the “Apply” button and it will automatically reverse the video. It also provides the option to manually change the reversed video playback speed in the range of 5 to 80. You can also add different video filters and loops to the reverse videos. When you’re all set, you can save the video and share with others for free. Apart from creating reverse videos, it also allows you to create forward videos, forward + reverse videos, and reverse + forward videos. 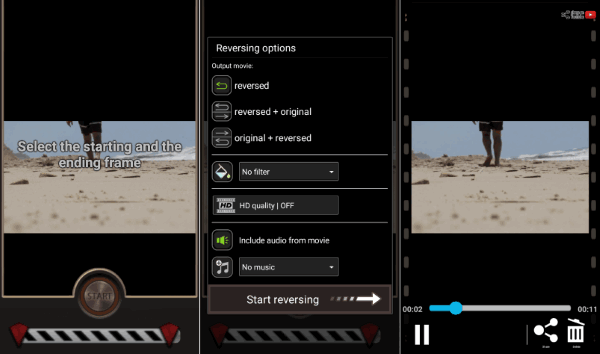 Reverse Movie FX is another free reverse video app for Android that can help you seamlessly reverse your videos. This one also lets you record new videos or use existing videos to reverse. After you open the app, you will see the option to select the video. When you do that, it will ask you to select the starting and the ending frame to trim the video. Then tap on the “Start” button and a popup will appear where you would need to select the “Reversed” option under the “Output Movie” section.

As soon as you do that, hit the “Start Reversing” button and then it will create the reverse video for you automatically. This app also offers various video filters which you can apply to the resulting video. It also lets you include audio from the selected video or add some predefined music to the video. When you’re done with making the reverse video, you can preview, save, and share it with ease. This app also lets you create other videos including “Reversed + Original” and “Original + Reversed”. 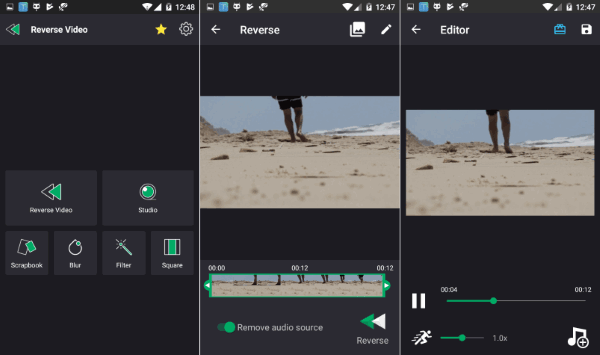 Reverse Video (by MediaCoding) is also a free Android video reverse app that allows you to create reverse videos. This app also has an intuitive interface such that you can easily generate reversed videos. When you first open the app, simply select the “Reverse Video” option and then select a video either from phone gallery or record one. After that, you can see the option to trim the video just by picking a starting and ending point. When you’re done with that, simply tap on the “Reverse” button visible at the bottom.

As soon as you do that, it will automatically process the video and make it a reversed video. Now, you will see the option to change the speed of the video in between 0.25x and 1.75x. Apart from that, it comes with an option to keep the audio source of the video or remove it. You can also add your own audio if you want. Once you’re done with the reverse video, you can save it to phone storage or directly share with others. 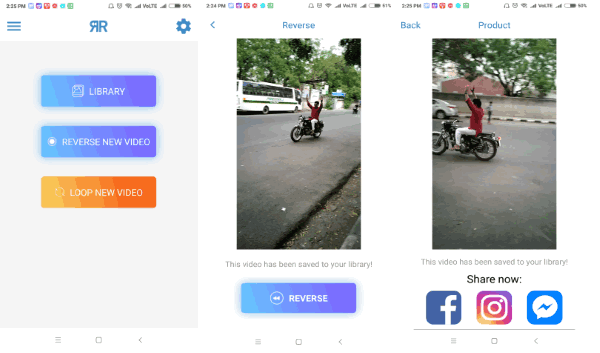 Reverse Video Master is also a free and useful reverse video app which you can use on your Android phone to create reversed videos. After you open this video reverse app, you can browse your phone video gallery and import any video you want to reverse. You can also select the “Reverse New Video” button to record a new video using the built-in camera. After that, you can see a “Reverse” button at the bottom which you need to tap to proceed.

Now, this app will automatically start processing the video and convert it into a reverse video instantly. Then you can preview the resulting video and also share it right away via Facebook, Instagram, Messenger, etc. Unfortunately, this app doesn’t have any editing options like change video speed, add music, trim, etc. However, it comes with a unique feature using which you can loop videos for free. 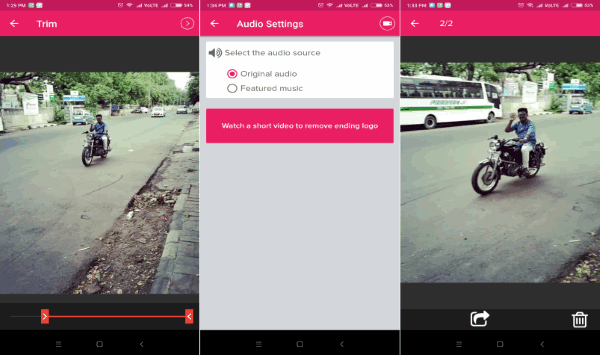 ReverX is a simple Android app which can also be used to create reversed videos. To get started, simply open the app and then select a video from your gallery or you can use the built-in camera to record a new video. After that, you will see an option to trim it by setting a beginning and ending frame. Then in the next step, you can choose whether you want to keep the original audio or use an external music file.

After that, tap on the “Video” icon at the top and then it will start reversing the video for you. When the video is reversed, you can preview it on the app, save it to your phone storage, and also share it on social media. Unlike other apps explained in this post, this one doesn’t actually have the option to change the video playback speed.

So, if you have been looking for some Android apps to create amazing reverse videos for free, then this post is for you. All the apps explained in this post make it super easy for you to create reversed videos in no time and with minimal effort. They work just like the core video reverse websites and help you create some interesting and funny reverse videos.

Let me know which app you liked in the comments.