Google Chrome’s Incognito mode is a privacy feature which allows you to surf the internet without storing data. In this mode, the browser neither records the browsing history nor stores the web cache. Unlike the regular browsing, this gives you a private session where no one can later track which websites you have visited.

The incognito mode sounds like a good feature which can come very handy time to time. But, this feature can also be put to improper use. If you share your phone with someone especially kids, they might use this feature to browse inappropriate websites knowingly that their activities are not recorded in the browsing history. In this article, I covered a simple solution that might help you handle this type of situation by disabling the incognito mode.

The video demonstration above will also help you in doing this.

How to Disable Incognito Mode in Chrome on Android:

Disable Incognito Mode is a free Android app that disables the Google Chrome incognito mode on your phone. You can download this app from Google Play Store and set it up to disable the incognito mode.

The set up is short, simple, and one-time process. When you open this app, you get an “Open Settings” button. Simply tap on that button which takes you to the Notification access settings. From the Notification access settings, give this app permission to access notifications by enabling the toggle, and you are all set. Now, whenever someone tries to open the incognito mode in Google Chrome, it won’t open. 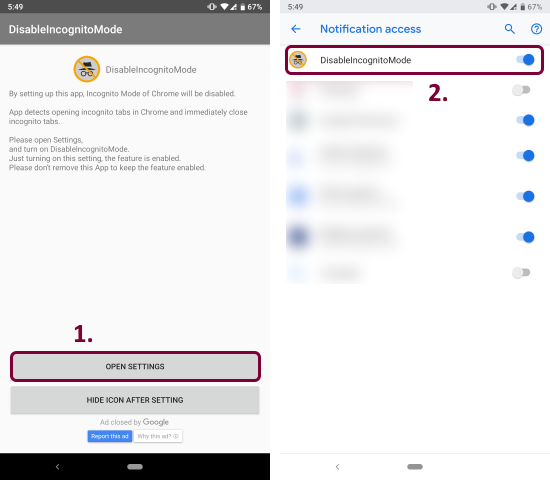 In case you want to enable incognito mode again, all you have to do is open this app and turn off the notification access. Once done, you can again use the incognito mode feature in Chrome.

To make it less suspicious, you can hide this app from the app launcher. This way, no one would find out what’s closing the incognito mode and might think it’s broken. This app does offer an option to hide the app icon but it’s an in-app purchase feature that costs $1. Or, you can use a free third party launcher instead (such as Evie Launcher, Niagara Launcher, etc.) which allows you to hide app icons from the launcher.

Disable Incognito Mode provides you with a convenient method to block the incognito mode in Google Chrome on an Android phone. It’s totally free and easy to set up. With this app, you can easily enable/disable the incognito mode within a few taps.