Buttons Remapper is a free button remapper app for Android to remap hardware buttons. Using this app, you can remap the buttons like Volume Up, Volume Down, and also the capacitive keys including Home, Menu, and Back. Remapping the buttons will help you execute different actions such as Open Camera, Open Dialer, Open Browser, and more rather than their default assigned actions. It actually uses Android’s accessibility services to remap your Android hardware buttons. This app doesn’t work with the “Power” button and “Soft Keys” on Android devices, which means you cannot remap them.

To remap a button, all you got to do is choose the button to be remapped, select interaction (short press or long press), and define the action which will be executed by the remapped button/key. Please do note that the remapped buttons or capacitive keys will not work if the Android screen is off.

If you want something similar for your PC, then check out 4 Best Keyboard Mapping Software For Windows 10

How to Remap Hardware Buttons on Android for Different Actions:

Before you start using “Buttons Remapper”, make sure that you have enabled it under the “Accessibility” settings after installing it on your Android phone. Or else, the app won’t work on your phone. 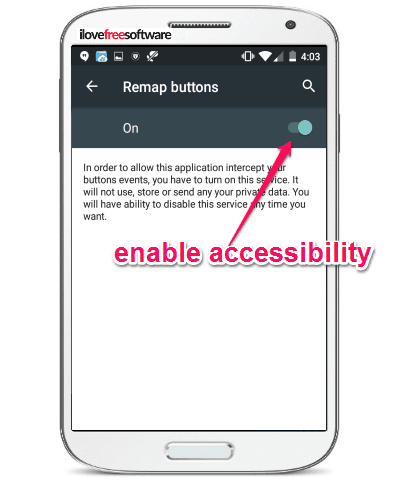 After you’ve done that, simply open it up and you’ll see a big “+” button at the bottom, which can be used to remap the hardware buttons. Now, tap on this button and then select the option that says “Short and Long Press”, as shown below. 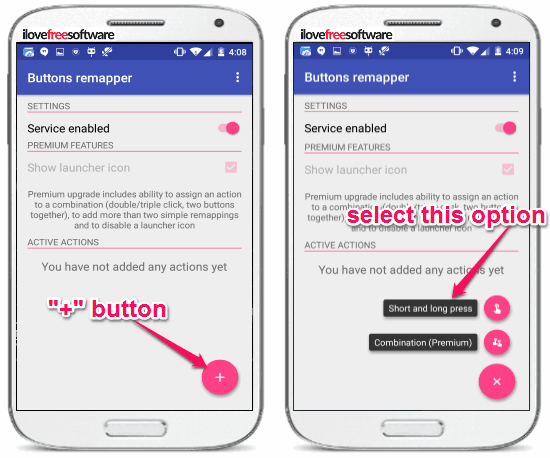 When you do that, a popup dialog will appear on which you will be able to choose the button for remapping, select the interaction method, and also the action to execute. By default, the interaction method will be short press, but you can choose long press by enabling the “Long Press” option. One more thing, on the popup dialog you would need to enable the “Block System Action” option if you want to use the “Short Press” interaction method. This will help to avoid mishap between the default actions and remapped actions. When you select the “Long Press” method, it will also ask you to define the time interval after which the action will be executed. 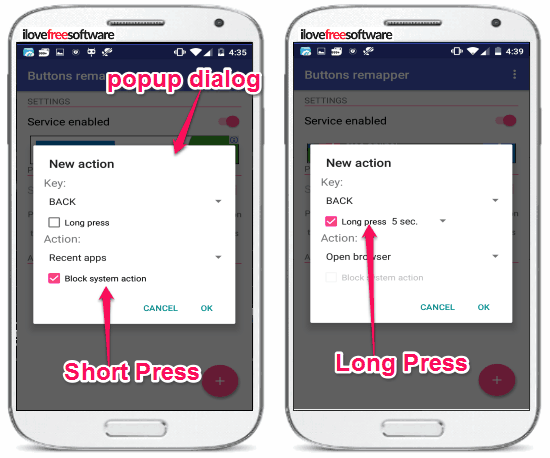 Once you’re all set with selecting any of the interaction methods, simply click on the drop-down menu associated with the “Key” option. After that, you can choose any of the buttons from the list such as Back, Home, Menu, Volume Up, and Volume Down, which you want to remap on your Android phone. 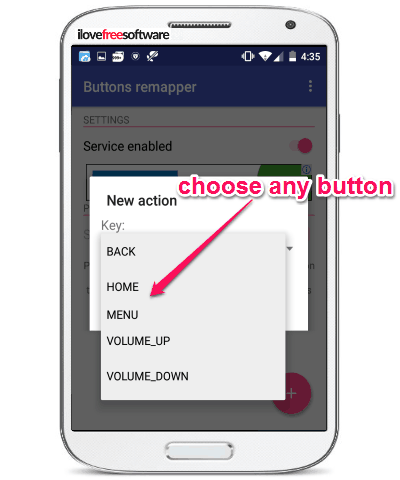 After selecting the button, you can go ahead and click the drop-down menu associated with the “Action” option to select the desired action which will be executed after pressing the remapped button. There are many actions available such as Open Camera, Open Quick Settings, Open Browser, Web Search, Open Dialer, Volume Control, Music Control, Power Option, and so on. There are many other actions like Switch Language, Kill Current App, Open Menu, etc. which require root access on your Android phone to execute. The only paid action is “Last App” which will open the last app which you have used after pressing the remapped button. 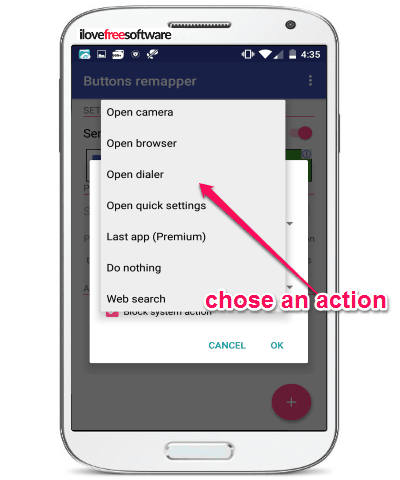 As soon as you’re done selecting the button and an action in response, simply click “OK” to save the remapped button. Now, each time you press the remapped button using the chosen interaction method, the assigned action will execute automatically.

Buttons Remapper is a very useful app that can help you remap your Android hardware buttons including the capacitive keys with ease. Apart from that, you can also assign custom actions for remapped buttons as you desire. Personally, I like this app as it comes with an intuitive interface which makes it very easy to use for remapping buttons.

Get “Buttons Remapper” from here.