Look Your Way is a free Windows 8 Game app. It is one simple but fun Windows 8 game app, wherein you have to control a red colored egg and unblock the blocked passages by reaching to certain milestones and avoiding the guards. The game is straight simple Windows 8 game app, which you can play without even needing the internet and in all Windows 8 supporting devices.

The game is very lightweight and just contains one single level. Still it’s fun and has the ability to hold you for a while. 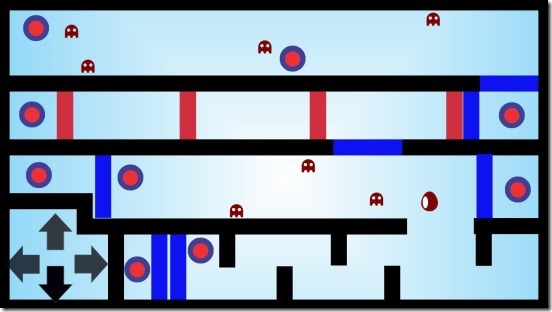 The game is very simple, and is more of a game that you want to play in free time and complete in few minutes, just to get refreshed. And, the game is quite good at doing so. The game looks like a combination of Pac Man and a maze game. The playing area is a maze and just like Pac Man there are guards in the playing area. But these guards only move in one specified path. But they are quite much in number, so you have to be careful while you move. And it’s not just the guards that you have to avoid hitting, but you also can’t touch the boundaries of the maze. If you touch any of these the game ends the very moment, loosing all your progress. There’s no time limit in the game, so basically the game is played with patience. 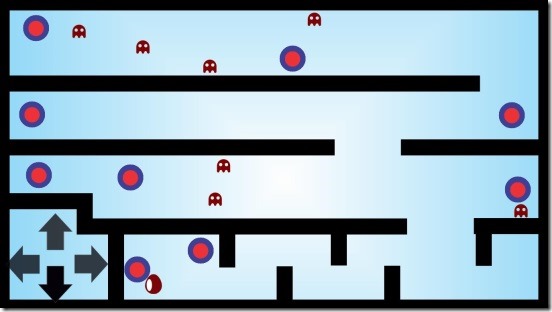 The game controls are very easy, simply use the four keyboard arrows to control the red egg (that is you). The game graphics are pretty simple and are in 2D, the simulations that is, sync between control keys and actions needs a little bit of improvement. However, it’s still fun to play the game. The gameplay is what that’s very good in the game. The game is a maze with lots of blue colored bars that block your way. However you can unblock the path by touching the red colored circular milestones. All you have to do is move with patience, and clear the whole path and reach the final red circle.

Look Your Way is a good enough free Windows 8 game app to play at free time. The game is very simple but has a good gameplay. Though, I wish that there were some more levels. And also including a time factor in the game can make it more fun. Still, it’s a pretty good start.

Get Look Your Way here.