Cyber-D’s RandomMP3 is primarily used to randomly play songs from selected folders. The program plays these songs in Winamp. This is the ‘Audition’ tool of the software. Once the folder has been played, the user can choose whether to keep the songs, delete them or relocate them. The program comes with another tool – ‘Charger’. This tool is used to sync files with Winamp on a flash drive or an mp3 player. Let’s have a brief review of this program and see if it’s any good. 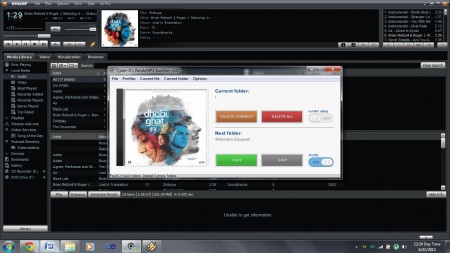 As mentioned before, the program doesn’t have a multitude of features to boast of. The ones worth a mention are as follows:

Audition tool: This tool is used to ‘audition’ the music files in a particular folder of the user’s hard drive or music library. The songs are played using Winamp player. After the songs have been played, the user can choose whether to keep the songs in the same state or delete or relocate them. This can be useful in case of a cluttered collection. In case more files have been added to a particular folder, the program allows the user to re-scan the folder manually, or it is automatically done once all the songs in the selected folders have been played.

Shuffle: The software allows the shuffle option in Winamp to be changed from the program itself. It can be turned on or off in the user interface.

Charger tool: This tool is used to synchronize files between a portable music player or a flash drive and a computer. The synchronization is done using random songs or albums and does not repeat songs. This is achieved by maintaining a log of the files that have been copied to the device already.

The software is not large by any means and is just over 2 MB in size. Downloading is, therefore, no hassle at all. Installation is a breeze too. The only downside is that the software can only play the songs in Winamp. If the user’s machine doesn’t have the player installed, the setup quits. The software worked smoothly on a Windows 7 system and should work well on older systems as well.

The interface is pretty basic and could do with some more attention to user interaction details. That said, the user interface is colorful. This shows a bias towards form over function. The software seems to work quite smoothly and once the root folder is chosen, it plays songs from one subfolder, followed by the next. In case the shuffle function is turned on, the songs are played randomly. If album art is available, it is shown in a small space on the UI.

The program fills a niche that nobody was asking to be created. The latest generation music players have more than enough functionality and this program is quite simply, redundant. The charger tool is handy, but more often than not, synchronization includes a full wipe. Cyber-D’s RandoMP3 could be done without, especially with better music players coming along every day.