This tutorial explains how to see bandwidth speed between two PCs in a network. NetIO is a free software which lets you do that easily. It works in a client and server mode and measures the network’s speed between two computers. It pings the target computer and calculates transfer and receiving speed by sending out packets of different sizes. The software logs all the speed test sessions that you perform on a network computer. It stores the network speed stats in a database and you can view those anytime you want.

NetIO works pretty easily. You just have to keep it on both the systems between which you want to calculate network speed. Put the server mode in one PC and client mode on another PC. And it will start measuring the network speed and show you the result. It is quite a useful tool for network professionals and to test the network speed between two PCs in a LAN. 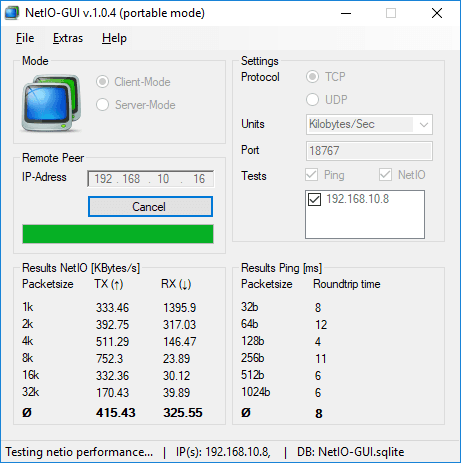 How to See Bandwidth Speed Between Two PCs in a Network?

NetIO comes as a portable software and you can even run it from a flash drive which is advantageous as the database will remain in one place. The software is quite intelligent too. It doesn’t immediately start measuring network speed. It first verifies whether the target peer exists by pinging repeatedly. Also, you can see the ping stats right on its interface.

When the ping test passes, it starts sending different size packets to measure network speed. It sends packets of size 1k, 2k, 4k, 8k, 16k, and 32k to measure network speed. Also, it uses different size packets (32b, 64b, 128b, 256b ) to ping the target PC to check its existence. You can opt to choose a protocol for testing the bandwidth speed. Currently, it supports TCP and UDP protocols.

These steps will guide you how to use NetIO to see bandwidth speed between two PCs in a network.

Step 1: Run the software on both the machines and its interface will open up. So, run the software in server mode on one PC and in client mode on another.

Step 2: In the software running in client mode, enter the IP address of the target PC on which the server is running. Hit the “Start measure” button and you will see that it will start calculating the network speed and will show it to you. 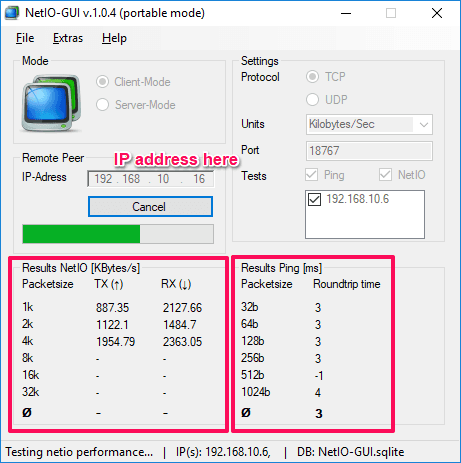 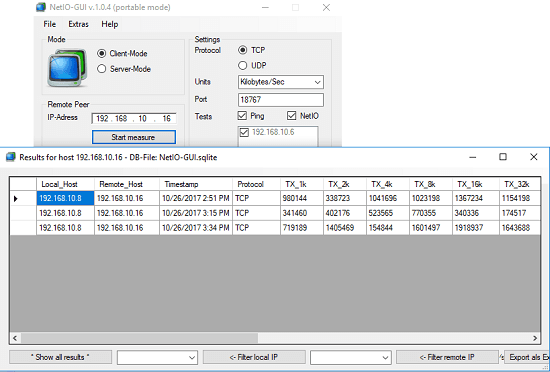 Using these steps, you can easily see bandwidth speed between two PCs in a network. And NetIO freeware makes it easy to do that. However, sometimes it takes a little time while measuring speed on big size packets.