Tape Recorder is a free Windows 10 voice recorder app which lets you record voice and play it back with a vintage tape recorder look. The app will make you feel nostalgic and take you to back to your childhood when you used to use cassette tapes to record and listen to voices or music. The interface of the app is exactly like your old tape recorders used to be with play, stop, record, etc. buttons on it. 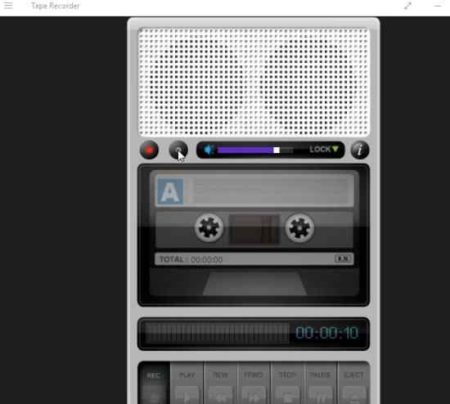 I really liked the interface of this app. It has the regular record, play, pause, rewind, forward, stop, and eject buttons on it. The timer above the buttons shows the duration of the recording.

The label on the cassette tape can be written upon, like you can put notes to remember what the tape contains. The lock button is to prevent the tape from being overwritten. Just click on the lock button and it will turn red and the text will change to unlock. Now your tape is write protected and you have to unlock it before recording further.

The i icon on the top gives you a explanation on how the buttons work. It is like a guide to use the tape recorder. A image of this guide can be seen in the screenshot below. 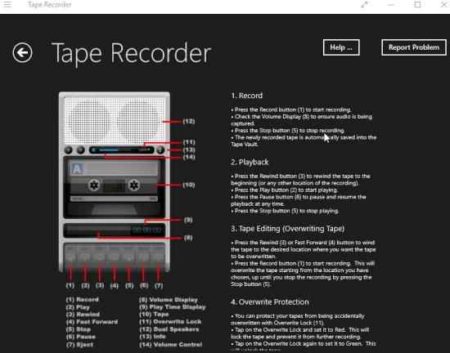 You can use this app to record a classroom lecture, meetings, somebody singing, or anything you want to record. It works and sounds exactly like the tape recorder of old days.

All the tapes that you have recorded so far will be shown in the window on the right side, as can be seen in the screenshot below. 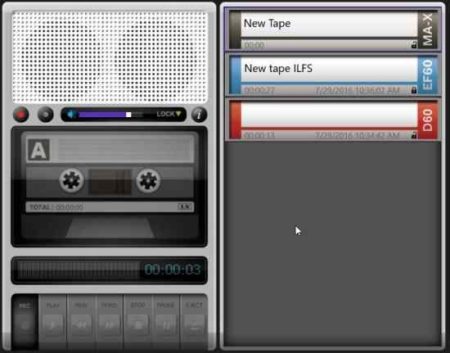 You can record as many tapes as you want. Just label them properly so you will know which tape contains what. Then you can go back to them and listen to them anytime you want.

The app also allows you to edit a recording you made easily, just like you would do in a tape recorder. Rewind the tape to a location from where you want to edit it, then play record button and overwrite that segment.

Tape Recorder app can be used to record anything you want, that too in a vintage look which you will love. You can record a karaoke singing night you had with your friends, or lecture in your college, etc. You get unlimited supply of tape, so you can record as much stuff as you want.