Brainteasers is a free Windows 10 app to solve brainteasers by reading clues given to you.  The main aim of this Windows 10 brainteasers game app is that you have to solve a murder case which took place in a mansion. Read all the clues which are given to you and let your detective instincts take over to solve this murder mystery.

The Windows 10 brainteasers app can be downloaded from the Windows 10 store or from the link given at the end of this article. When you start this app for the first time you will get an interface like the one shown in the screenshot below. 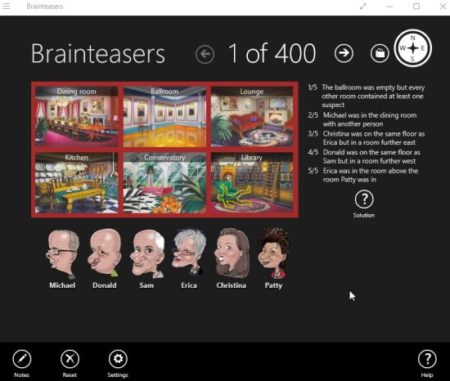 As you can see from the above screenshot, the app straight away takes you to the first brainteaser. The bottom menu offers you a notes option to make notes on the puzzle so that you don’t get confused with all the clues. The reset option resets your screen and erases any moves that you made. The settings app lets you change the font size of the app and also gives you an option to change the language.

Let’s look at how to play this game now: 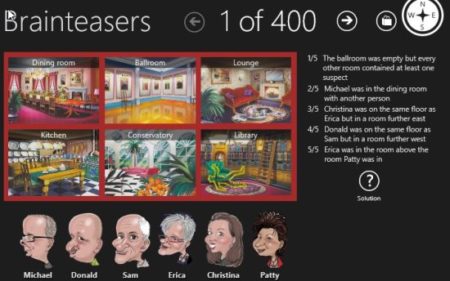 The above screenshot is basically the puzzle you are given. The six rooms shown are the rooms of the mansion where the murder took place. The people shown at the bottom are the ones that were in the house when the murder happened. Now you have to find the killer using the clues given to you on the right hand side. The directions at the top of the window tell you which direction is which and is very helpful while solving puzzles.

Read the clues carefully and start moving people into rooms according to the given clues. Once you have placed a person using a clue, you can click on that clue and a green check mark will appear on it, showing that you have already solved that clue. This can be seen in the screenshot below. 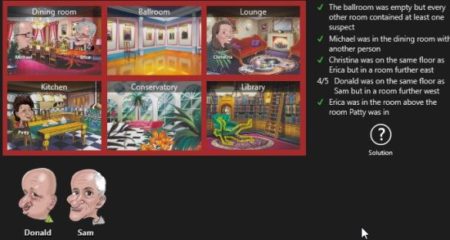 Once you have solved all the clues, you will know who the killer is and the app screen will reflect if your detective instincts were right or wrong. If you were wrong then a red bar will appear on the bottom saying that something went wrong. But if you were right a green bar will appear saying that you are right, as can be seen in the screenshot below. 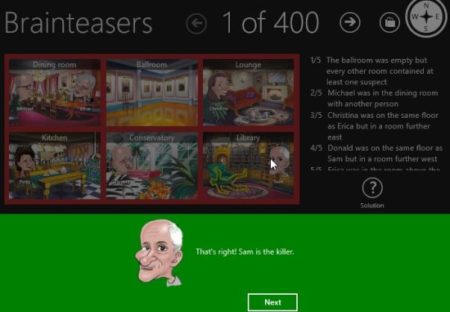 Features of this Windows 10 brainteasers app:

Brainteaser is a real fun and addictive app. I couldn’t stop myself from playing once I started. I always like detective type game apps, so this is perfect as far as being a detective goes for me. Solve murder mysteries by reading the clues given to you. Definitely check this app out.

Check out Brainteasers for Windows 10 here.