It is holiday season and to make even you computer look festive you can try out some animated snowfall apps that we have compiled for you. Most of the animated snowfall apps are not free in the Windows 10 store. We found 3 free apps which will give you a virtual snowfall scene on your desktop. Snowfall looks beautiful and if you can’t stand in the middle of one then you can surely have one on your desktop.

Let’s look at the animated snowfall apps that we found for Windows 10 below. 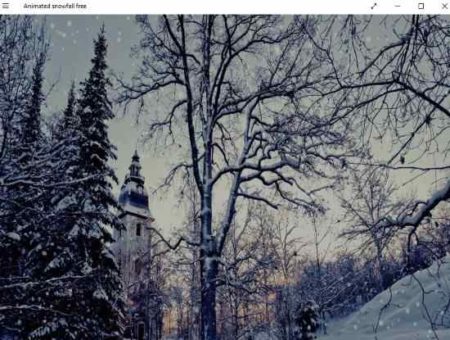 Animated Snowfall Free is a nice app to have a animated snowfall scene on your desktop. After installing the app you can have a beautiful snowfall screen like the one shown in the screenshot above. Your desktop will look festive with this snowfall app and you also get to change or tweak a few things in the app as well. Let’s look at the screenshot below to see what all changes we can make here. 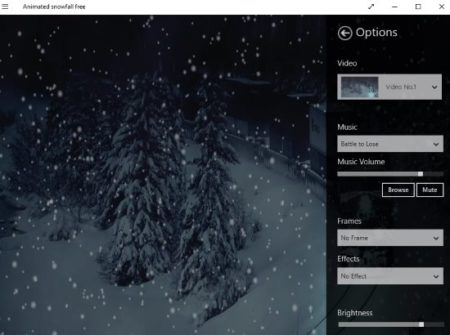 As you can see you can first of all change the background of the snow fall by choosing to play video 1 or video 2. Both backgrounds are quite beautiful and make your desktop look beautiful. You can also select the background music out of the three given choices. Choose the one which you like the most. Otherwise you also have the option to choose your own favorite music. Just click the browse button given below the music volume slider and browse for music you would like to listen. The mute button will turn off the playing music and you will just see the snowfall screen.

The music volume slider will let you increase or decrease the music volume. You can add frames and effects to the snowfall scene. There are 4 effects and 4 frames that you can choose from. Try them all out and see if you like any of them. You can also change the brightness of the scene by using the given slider. At the bottom you will have a sleep timer, where you can set a sleep time. After the set time is elapsed the app will shutdown automatically. 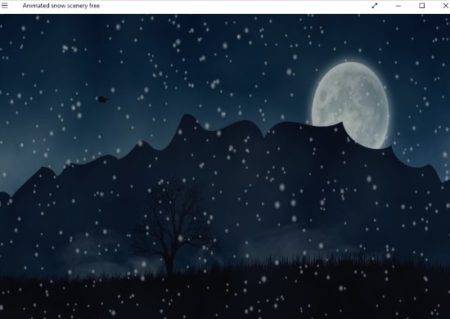 Animated Snow Scenery Free is a nice app to have a snowfall scene on your desktop. When you open up this app you will see a screen like the one shown in the screenshot above. This app has only one background which you can see above. But you do get options to change a few things which we can see in the screenshot below. 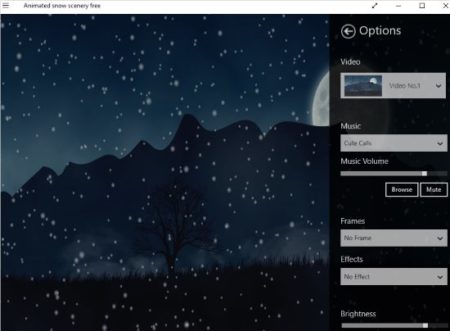 The app looks a lot similar to the one that we saw above. You do not get any options to change the video, but you can change music to one of your choice. You get three music choices from the app. Then you can also browse for your favorite music to play from your device. The mute button will let you turn the music off. The music volume slider will let you increase or decrease the music volume.

Then you have options to add frames and effects to your snowfall scene. Each of the drop downs have 4 options which you can try out. You can also adjust brightness of the scene using the given slider. You also get a sleep timer where you can set a time, after which the app will automatically shutdown. 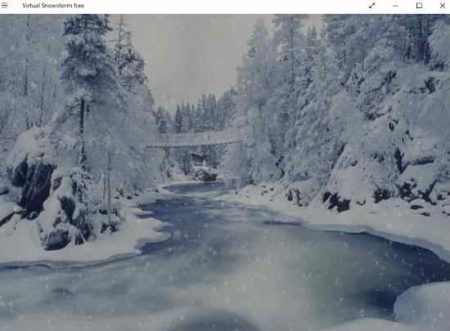 Virtual Snowstorm Free is a nice app to have snowfall scene on your desktop. This app is also quite similar to the above two you saw. The app has two snowfall videos which you can choose from. One of the video backgrounds can be seen above. The app is not much different from the above two apps. The changes that you can make to the app can be seen in the screenshot below. 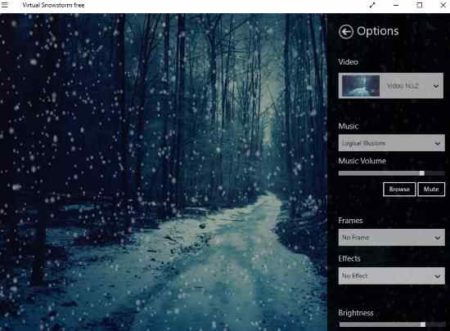 The first option is to choose between two video scenes. You can select which one you would like to play. You have three choices under music drop down. Apart from that you can also choose your own music using the browse option. The music volume can also be controlled using the given slider. You can also add frames as well as effects to the scene. Brightness can also be adjusted. Sleep timer can be used to automatically shut down the app after a set time.

All the three apps mentioned above are quite similar. Just a few differences here and there. But all three offer beautiful snowfall scenes for your desktop. You can use any of the apps to have a animated snowfall scene on your screen and make you desktop look festive.