Sudoku is a very popular puzzle game and quite challenging as well. But if you are bored of playing with the number grid then you can also switch to picture Sudoku which is equally fun. Picture Sudoku is also a good way to teach beginners or kids the logic of this game. It will be easier for the kids to understand the game when they start with picture Sudoku.

These websites included in this article give you picture Sudoku puzzles which can be played online. So just go to these websites and choose the picture puzzle you want to play. That is it. You will get a grid with pictures in it and as the regular Sudoku rules, you have to fill in the remaining cells in the grid.

Let’s look at these websites with picture Sudoku puzzle games to play online below. 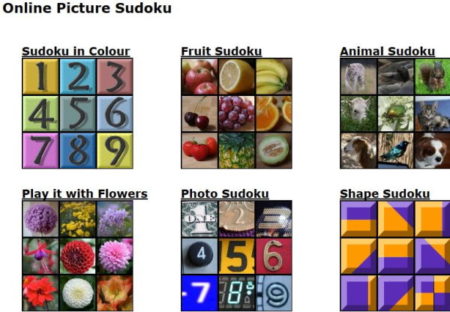 Picture Sudoku as the name of the website says offers you Sudoku puzzles with pictures in it. When you launch this website you will see a page as seen in the screenshot above. All the picture Sudoku puzzles which can be played online are listed on the home page in tile format. You will find games like Sudoku in color, fruit Sudoku, animal Sudoku, flower Sudoku, photo Sudoku, etc. You can click on any of the puzzle tiles to start playing them. As soon as you click a puzzle game it will open up in full page view as can be seen in the screenshot below. 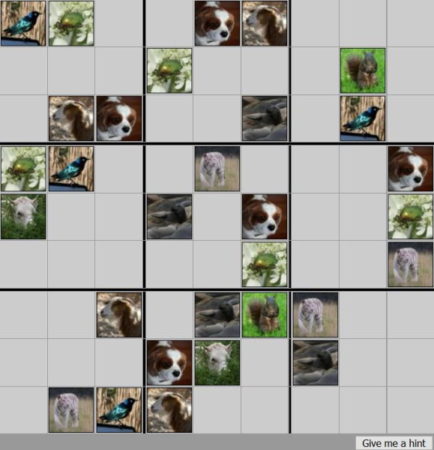 In the screenshot above you can see that the numbers in the grids have been replaced by animal pictures. Now following the same rules, you have to fill in the grid using animal photos so that each row and column does not have a photo more than once. When you hover your mouse over a empty cell, a pop up window will come up with all the animal pictures in it. Just choose the picture you want to insert in that cell and it will be added to the cell.

The give me a hint at the bottom right corner of the game window, is for helping you when you are stuck and can’t figure out the puzzle anymore. 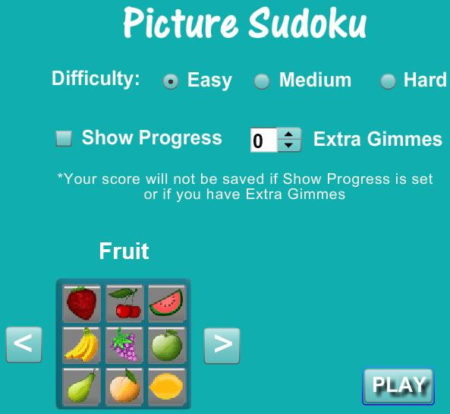 Kongregate is a online gaming website with lots of games available to be played online. Among these games, you can also find a picture Sudoku puzzle to play online. Use the link given to reach the online picture Sudoku page. The Sudoku page will look like the screenshot above. You will get options to choose from. First of all you can choose the difficulty level you want to play on the top of this window. You can choose from easy , medium, and hard. Then you can choose the picture for the puzzle. At the bottom you can scroll and select which picture you want for your puzzle. The options available are fruit, sports, flowers, numbers, animals, and stuff. Choose the pictures you want to play with. 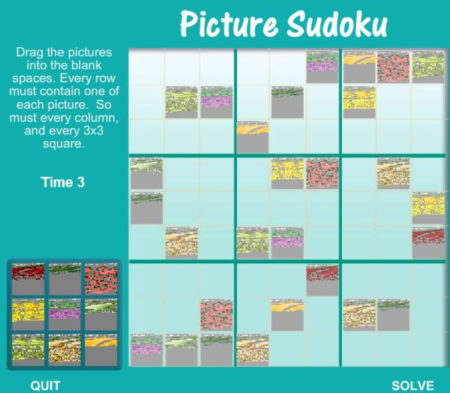 When I opened a puzzle the pictures were not being displayed properly. I was getting blurred pictures again and again. The game screen looked like the screenshot above. It was still playable. All you have to do is drag and drop an image given at the left side bottom on to the grid. The same rules as classic Sudoku apply to this game as well. In case you are stuck and not being able to solve the puzzle, then you can click the solve button given at the bottom right corner. This will solve the entire puzzle for you. 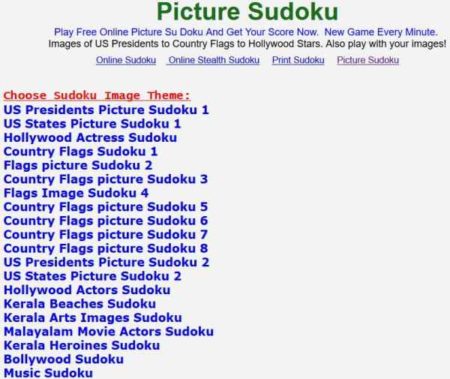 Sudoku Score is another good website to find nice picture Sudoku puzzles. Use the given link to open this website. Once on the website, you will see links listed for different Sudoku puzzles. This can be seen in the screenshot above. You can click on any link to open up that online Sudoku game. 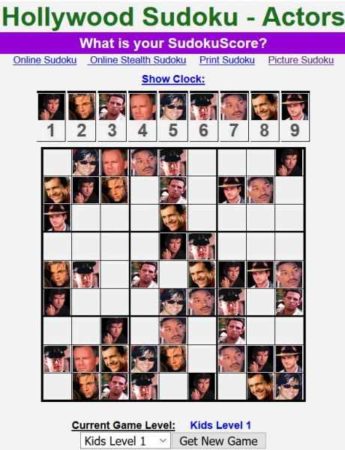 I opened up the Hollywood actors Sudoku puzzle game, which looks like the screenshot above. Standard Sudoku game rules apply to this one as well. To fill up a cell, look at the top of the game window. You see numbers written below every actors photo. When you want to fill in a cell just write the number mentioned below that actors photo. As soon as you write the number it will be replaced with the image of that actor. You can change the level on the game using the drop down box given at the bottom. 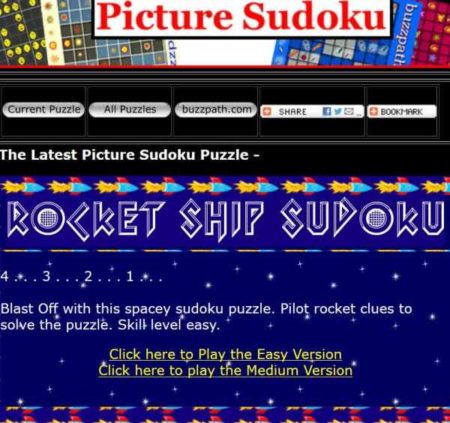 Buzzpath is a nice website to find lots of online picture Sudoku puzzles. Use the link to open this website and you will get a page like the one shown in the screenshot above. This page has lots of different picture Sudoku puzzles with different themes like rocket ship, Easter egg, Valentine day, Christmas, etc. Click on the level which you want to play from easy and medium. When you click on the link then the puzzle will open up, which will look like the screenshot below. 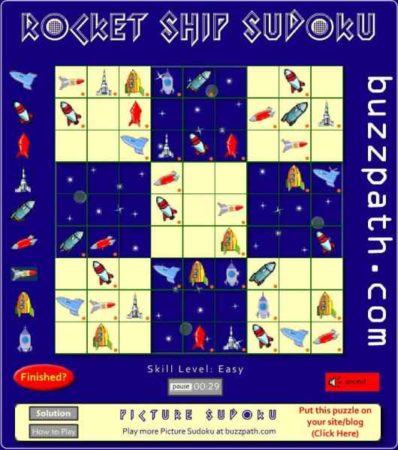 In this puzzle, click the start button given at the bottom and the timer given next to it will start. Now start playing the game and see which picture needs to go in which cell. The pictures are given on the left side of the grid. You can drag and drop these images on to the grid.

These are some nice websites which let you play picture Sudoku online. The games provide you with different levels to play and the games are quite challenging. Try them out and tell us if you liked the picture Sudoku games.