This blog post covers 5 free online DjVu to TIFF converter websites. DjVu files mainly store scanned documents (including text, images, etc.) and TIFF (Tagged Image File Format) files contain images, etc., and both can contain multiple pages. If you want some good websites for DjVu to TIFF conversion, then this post is all you need to check.

TIFF file size could be a lot higher than DjVu file. As an example, if DjVu file is around 800KB, then output could be more than 100MB. But, you will get the output as expected.

Mainly, you have to insert an input file with DJVU format. After this, you can target the output format, i.e., TIFF. Thereafter, you are able to convert files online. The converters let you save the TIFF file as well. The converters support different types of file format. Also, you can convert DJVU file into MOBI.

Let’s check out these websites and convert DJVU to TIFF files. 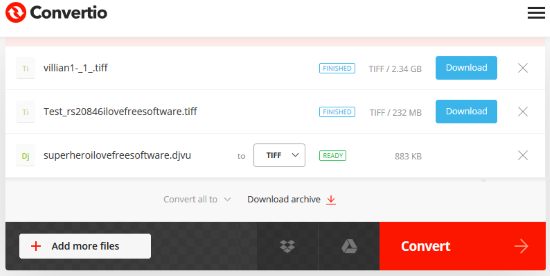 Convertio has some fantastic features that are not a part of other DjVu to TIFF converter websites. Some good features are:

In the free plan, there is a 100 MB size limit for a single DjVu file, and 2 DjVu files can be converted at once. The free tier seems good for personal use. So, it is a better choice for online DjVu to TIFF conversion. 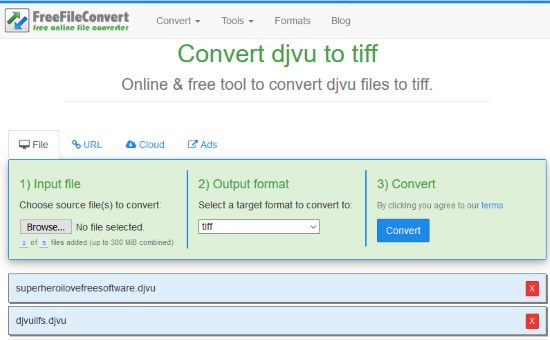 FreeFileConvert is also a very good DjVu to TIFF converter website. It also has some features which make it better than many other file converters. The list of features are:

When the output files are generated, each TIFF file can be downloaded 5 times, and then this website will remove them. 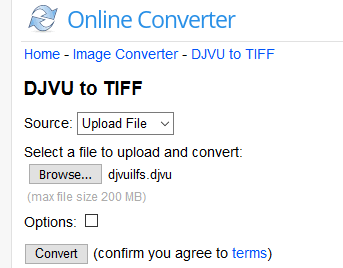 Online Converter can convert a maximum 200 MB DjVu file to TIFF. The input size limit is more than enough because usually, DjVu file doesn’t come that much size. One DjVu file conversion is possible in a single session but the conversion process is always successful. You can add online DjVu file or upload DjVu document from the desktop.

It also has an extra or unique feature. You can change width n height for TIFF file. If TIFF file doesn’t come good then I suggest you keep the default size for a better output. You can download TIFF file maximum 10 times or up to 24 hours and then delete the file from its server. If you don’t delete it by yourself, the website will do it automatically. 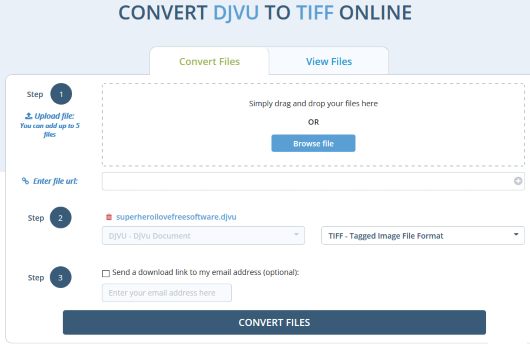 DocsPal is another DjVu to TIFF converter. The conversion process is very simple and has only three steps. You can add a DjVu file from the desktop. The website has mentioned that you can add up to 5 files, but I found out that I was able to add only one file. Online DjVu file is also supported for conversion.

When DjVu file is added, use drop down bar to select TIFF as output, and start converting the input file. The output is downloaded in a zip file. It doesn’t generate a multipage TIFF file as output. Instead, single TIFF files are generated for each page of DjVu file. If this condition meets your requirement, this DjVu to TIFF converter is good to try. 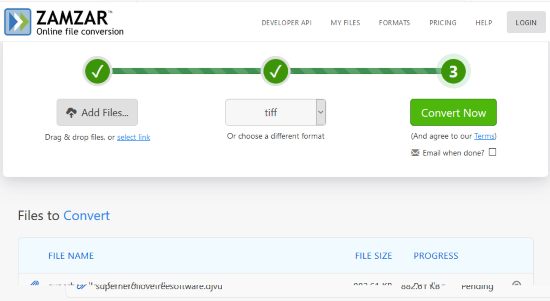 Zamzar is one of the oldest and popular file conversion websites. It supports almost all file types for conversion. So, there is no surprise that DjVu to TIFF conversion is also possible. Its DjVu conversion process is also similar to DocsPal. You can add DjVu file (50 MB maximum) from your desktop or add URL of a DjVu file, select TIFF for conversion, and use Convert Now button. It also comes with a feature to get output in your email address. If you don’t need such features, then keep it unchecked.

Earlier, the free tier lets the users convert 5 files, but it has made some changes. In the free tier, only one DjVu file is supported (in a single time) for conversion.