Monetizer is extremely easy to use and supports tons of currencies from around the globe. One feature I like in particular is that it shows at what time were the currency rates last updated in the app, so that you can know how fresh the currency rates are. The app pulls latest currency rates every minute from the internet. If you are not connected to internet, the app will not work. 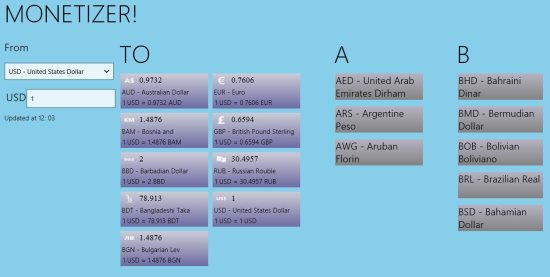 How to Use Monetizer for Windows 8 Currency Converter App:

The interface of the app is quite simple, but there are a couple of things that are not intuitive. So, read out the steps below to understand how to easily use this app.

The app works in snap mode as well, and you can quickly do currency conversion in that mode too.

This Windows 8 currency converter app is simple and bare-bones, and does what it says. If you would like to use something better looking, you can try XE Currency or Currency Converter+. The advantage of Monetizer is that shows last updated time, so that you are always aware how fresh the currency rates are.