Episode Player is a free software to remember the last watched episode of any TV show. This is handy for those who usually forget which episode of a particular TV show they have watched the last time. So, instead of manually opening every single episode, you can take the help of this software. It marks the watched episodes with a blue tick on its interface, which makes it very easy to check which episode you should watch next.

The software first lets you add all the episodes of a TV show on its interface and provides the list of media players installed on your PC. You can select any player to watch a particular episode. As soon as you play the episode, it is marked as watched on its interface. You should watch episodes in a sequence. If you play an episode in between the list, then all the episodes listed above the currently playing episode are marked as watched. However, you have the option to undo the changes by playing any other episode available in the sequence. 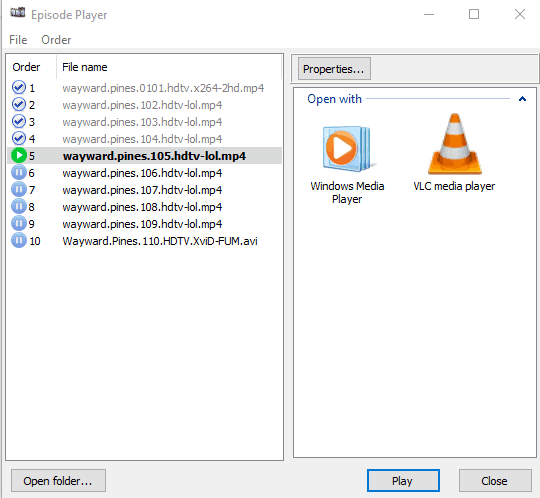 Above you can see the list of watched and unwanted episodes on its interface.

How To Use This Software To Remember The Last Watched Episode of TV Show?

This is easy to use software and everything is self-explanatory. You need to get the setup of this software and install it. Open its interface which is divided into two sections. 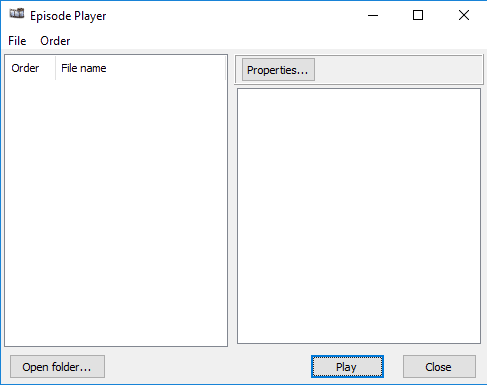 Use File menu to add the folder that contains all the episodes of a TV show. After that, the list of all those episodes will visible on the left section of its interface. As soon as the list of episodes is visible, the media players installed on your PC are also visible in the right section. Now if episodes are not in the chronological order, then you can also move up and down the episodes.

Finally, you can select an episode and a media player to watch that particular episode. As soon as an episode is started, it is marked as watched. 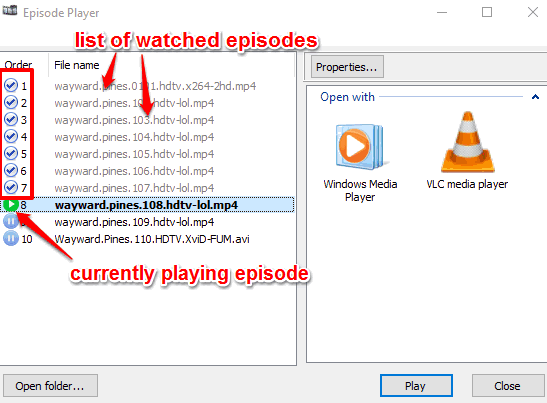 You can close its interface and when you have to watch another episode of a TV show and you forget which was the episode you have watched last, then you can take the help of this software. Just open it and you will be able to see the last watched episode.

You may also have a look at these 5 Free Software to Watch TV on Computer.

This is a very simple software that helps you remember the last watched episode of a particular season of a TV show. It can’t trace the progress related to if you have watched an episode completely or just partly viewed it. So, even if you close the episode immediately after opening it in a media player, it will mark that as watched episode. Still, I guess it can be handy when you have a list of dozens of episodes of a TV show and usually forget to remember which was the last episode you have watched the last time. Just add the list of episodes on its interface and let this software remember that for you.