Web Album Generator is a freeware to generate web albums, which allows you to share your digital photos with friends, family and the world. This album generator software lets you to create HTML, JPEG thumbnails and CSS images for an online photo album. Indeed this free web photo software is quite easy to use, and lets anyone generate Web photo album.

This web album generator is quite useful if you have free hosting space from your existing internet service provider. In that case, you can use that space to host these web albums. 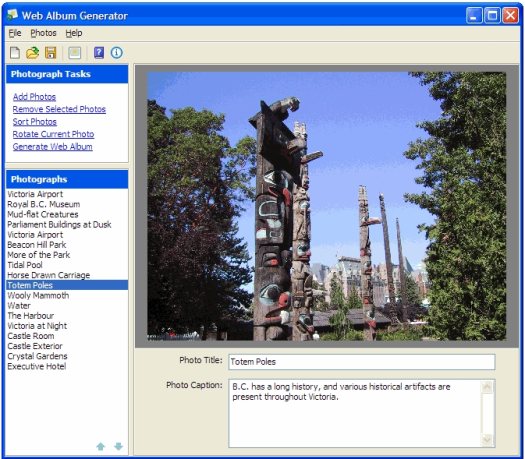 The software comes with a slew of features that are designed to make your photos stand out from other programs offering the same service.

Some other album generation software we reviewed earlier include: Thumb Studio, S10 Web Albums, and Yogile.

Here are some of the features of Web Album Generator:

The creators of this universally useful web photo album recommend that you stay up-to-date and be one of the first to learn, via email, about new versions being released. Web Album Generator engineers and creators are continually looking into innovative methods and other ideas that will improve the software. This handy and simple-to-use application is able to be run on all Windows computers from Windows 98 upward. This in itself is a unique point; as most other applications tend to be only for Windows XP and upward.

For those who would like to see Web Album Generator, in action before downloading; feel free to click on the ‘sample photo album’. From there you will see an album that was created in less than ten minutes. We are sure you’ll like what you see and that you will start creating you own Web Album Generator soon after watching the sample. Get your photos ready, your family and friends are waiting.

Web Album Generator is a free application and it has been through donations that the creators and designers of this photo software have been able to bring their creation to the world.