Angry Birds Action is the new installment in the Angry Birds franchise. This Android game has been spun off from its soon to come movie. Angry Birds Action has traded the typical projectile based mechanics for a pinball influenced gameplay, unlike its predecessors. Now instead of pummeling pigs and destroying feeble structures, you control the protagonist Mr. Red to headbutt bumpers. The aim is to collect eggs placed on bumpers on the way while you wreck walls. You’ll also collect coins in your run which might be used to unlock certain items in the future. While you ascend the levels, you’ll find many familiar birds

The game starts with the Mr Red being held responsible for the village being blown to pieces. Red needs to find proof that he was not involved in the wreckage. When you parry through the levels, you’ll come across pieces of a photo that’ll build up into the evidence, and from there the plot will carry on onward. 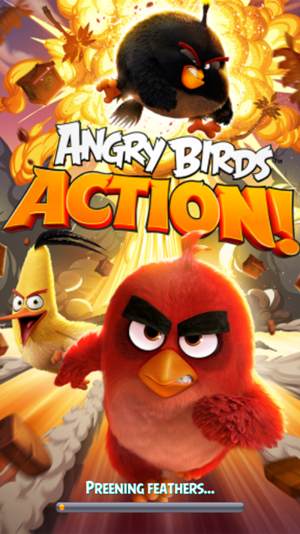 Make sure you check out Angry Birds 2, the previous game in Angry Birds iteration. This game employs the well known and traditional slingshot mechanics gameplay. So if you want to see some BOOMS and KA-POWs, lets start the game!

How to Play Angry Birds Action

The gameplay starts with Red in an environment where crystal (or ice?) blocks, stones and bombs are arranged into a pinball-ish layout. Instead of a traditional pinball launcher, you get to aim, drag and launch Red many times. The only limit is that of the bird’s health. Banging the bird onto the bumpers and walls seeps life out of the bird (animal cruelty!). You will be given a number of lives and energy which will decide how frequently you can play. 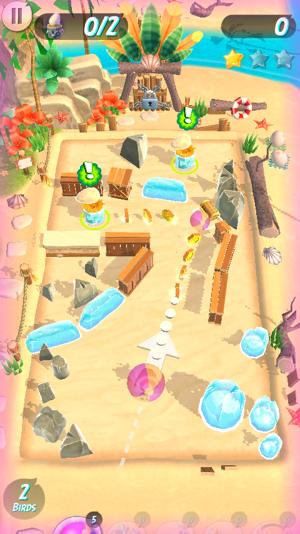 The eggs are placed on pedestals which you have to smash. Smashing things also earns you a lot of experience. Once you get past a certain level, you’ll win a power-up which will help you get past walls or cause more wreckage. The first power-up you will get is the beach ball. The beach ball when activated will make your bird more bouncy. 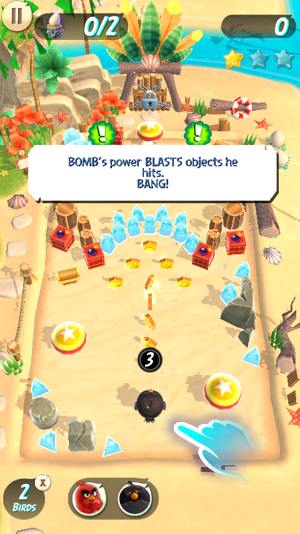 Like the traditional game, you will also come across different birds with different powers. The birds can be toggled on the bottom-left of the screen. At the end of each level you’ll get to unlock coins, gems and power up refills.

There are three things you need to pay attention to, if you want to three star every level. They are: line of fire, visualization and the level environment. make sure you visualize the trajectory of bird when you drag and release it. Do not rush to blow up bombs and try to find the pattern with which you’ll be able to grab all the eggs in a single run.

Angry Birds Action is a really awesome game if you love pinball and smash and break games. You will definitely enjoy its levels and varying difficulty.  Not only that, you can also add new content, mini-games and power-ups by scanning bird-codes provided on Angry Birds toys and the soon to release movie. This game definitely deserves 5 due to its engaging gameplay, level structure and exciting power-ups.