Frets on Fire is free game where you can showcase your musical skills and the swiftness of your fingers. The main aim of the game is about playing guitar using the keyboard. The more accurately you press the keys, the more points you score. It is like one of those games where you to have to press the keys shown on the monitor with perfect synchronization to earn the maximum points.

This is definitely not a game to learn to play guitar, but it might help with that too. However, it does provides lot of fun. 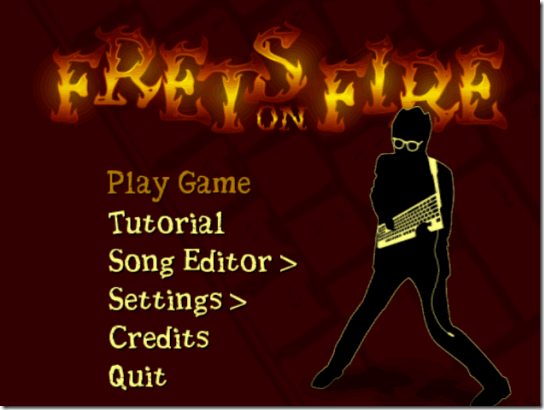 The game also allows you to add new tracks to the pre-existing tracks. It has options where you can create your own tracks that will be played in the game. The game has a very easy to understand interface and I am sure you will waste many hours once you start playing this game.

How to play Frets on Fire:

The game can be downloaded using the link at the end of the review. Once downloaded, install it the same way as you would install any software. During the installation process, you will get a screen like the one below which asks for the resolution. Let the resolution remain 640×480, later you can change this from within the game.

Once installed, run the game from the Start menu. You will get to the home-screen of the game. Users should note that the basic movement across the menu is using the Arrow keys.

Before jumping into the game, it is better to go for the tutorial. However, if you are good at it, don’t waste your time. The tutorial is given by a person in a manner which will infuriate someone so that you play and prove that you are good at this. The ending line of the tutorial asks you to sell your keyboard at eBay because you cannot play the game. 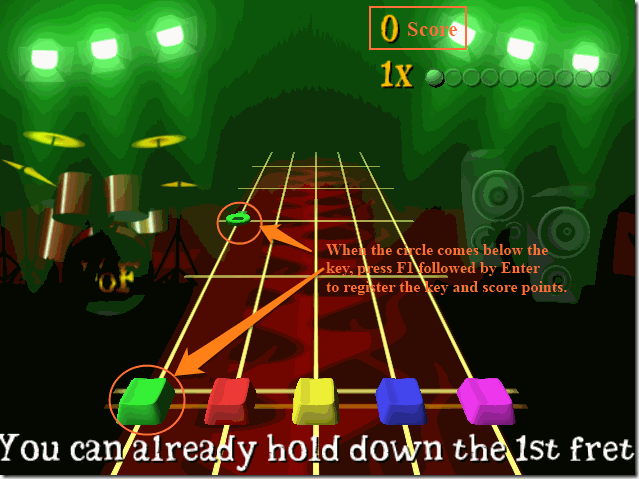 The basic inputs in the game are made by F1, F2, F3, F4 and F5 which represent the 5 strings on the display and referred to as Fret1, Fret2, etc. The Enter key has to be used after pressing either of the Function keys to register the input. The Esc key can be used to come out of the game anytime you want.

Ok now that you know how to play the game, lets play. Clicking on Play Game on the home-screen will take you to a page like the one below. Here you have to select the song to which you want to play. Songs can be accessed using the up down arrow keys. 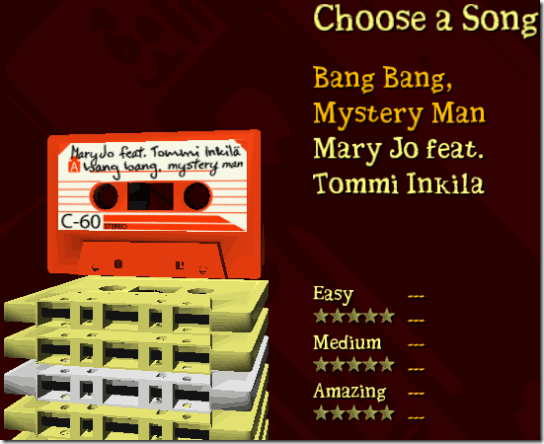 Once the song is selected, you are forwarded to the screen where you have to choose the difficulty level from easy, medium, and amazing. Once done, you are now ready to tap your keyboard. If in the middle of the game you feel like restarting, or change the song or settings, or quitting, press the Esc button. You will get a screen like the one below.

The Song Editor allows you to Edit Existing Song, Import New Song, or Import Guitar Hero Songs. You can add changes according to your wish in the songs.

If you want to just play a good guitar on PC, check this out.

How to add additional songs in the playlist:

You can download the additional songs from this link. Here you will get a zip file Song Pack.rar which has to be downloaded. Once downloaded extract the zip file. The extracted contents inside the Songs Pack have to be pasted in this path ‘..\Program Files\Frets on Fire\data\songs’.

Restart the game, you will see the new songs in the playlist where the songs for the game are selected.

Frets on Fire is a nice game to pass your time. The interface is really good and so are the song files that have been added to it. If they would have given multiplayer option it would have been really more interesting.

Get Frets on Fire here.