Coin Mania: Ninja Dozer is a Windows 10 arcade style game app where you have to push coins off the end of a belt and collect prizes as well in the process. Drop the gold coins by pushing them from the belt. At the end of the belt is a moving bucket, if you are able to drop coins into the bucket then the slots given will revolve automatically. You might end up winning a jackpot in the slots.

The Windows 10 arcade style game app can be downloaded from the Windows 10 store or from the link given at the end of this article. When you start the game app you will come across a interface as seen in the screenshot below. 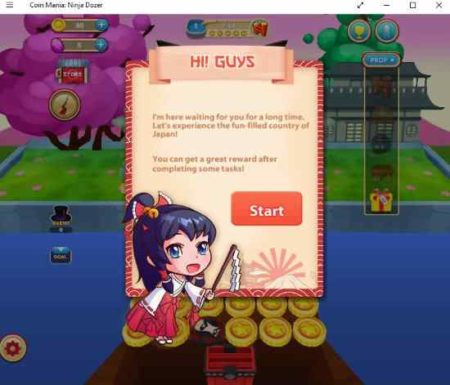 Click on the start button to start the game and you will have the game play screen in front of you, as shown in the screenshot below. 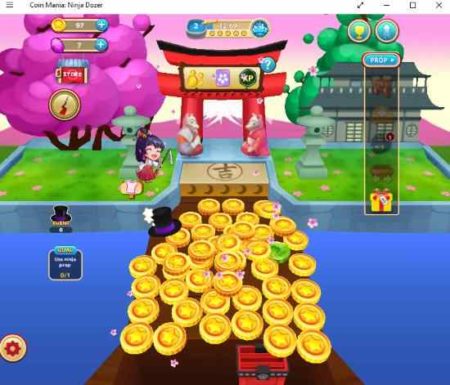 Here you see all the coins lying on a belt and a pusher at the rear end of the belt, where you have to drop more coins so the ones in front get pushed into the empty space at the other end. The empty space also has a moving bucket, if you are able to drop coins in this moving bucket then the slots given on the rear end gate will start rolling and you will end up winning some prize.

The level you are at is displayed at the top of the screen. On the left side of the app the number of coins you have is displayed along with the number of diamonds you have. Below this is the store from where you can buy stuff like coins, diamonds, and props. There are four props which are given to you in the game as special powers, which can be seen in the screenshot below. 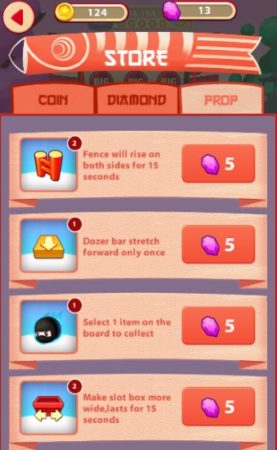 Fence will give a fence on both sides of the belt to avoid coins from falling off the belt. Dozer option will extend further then it usually does to push more coins in. Ninja can pick one item up from the belt. Slot box icon will make the moving bucket size a bit bigger so more coins can fall in it.

Coin Mania: Ninja Dozer is a fun and exciting game which is set in Tokyo. You have the coin pusher to push the coins and prizes off the belt. These prizes can be collected and exchanged for something else later. You also have the additional bonus of slots in this game. Each time you land coins in a moving bucket at the end of the belt, the slots will roll. Overall, it is a good game to play, just make sure that you don’t run out of coins, other wise you will have to wait for some new coins to appear.