Here is a list of 3 Google Translate software for PC. We all know Google Translate is a popular and one of the best language translators. But, it is available as an online application. Those who want to translate text or file using Google Translate from desktop, without any browser, this list will be very helpful. You can translate text in English, German, French, Arabic, Hebrew, Persian, Indonesian, Portuguese, Russian, Italian, Japanese, Korean, Latin, Urdu, Greek, and more.

Let’s check these free Google Translate software one by one. 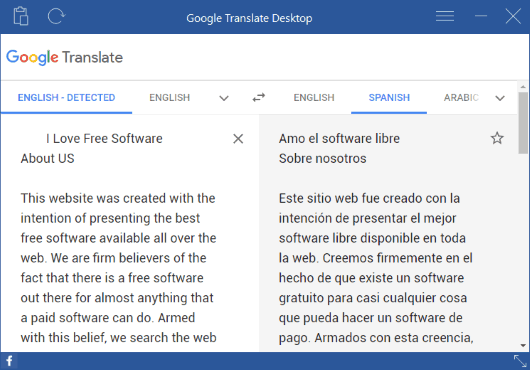 Google Translate Desktop (Homepage) is one of the best options here and I also like it. Its interface is similar to Google Translate which is another reason that I like this software. On the left part, you can paste or add text (maximum 5000 characters) for translation. The text language is detected automatically. Still, you can change the language if needed. When the text is added, set the translation language, and you will get the output.

You can also listen to the original text and translated text which is again a feature of Google Translate. The translated text can be copied to Windows clipboard in a single click. 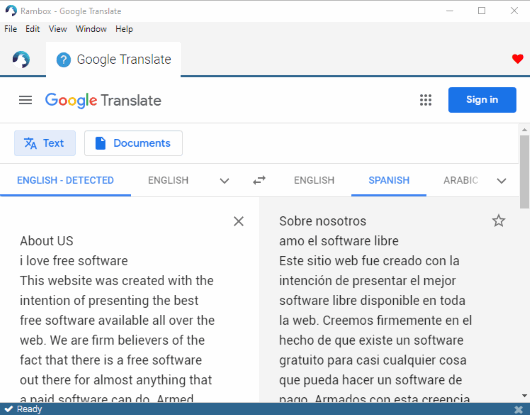 After that, you can paste some text or add PPTX, PDF, DOCX, DOC, or other supported file, and convert it to some other language supported by Google Translate.

The good thing about this software is you can also use Gmail, Outlook, Canva, Reddit, Google Keep, Google Classroom, Trello, Allo, and other services as desktop applications. So, it has multiple benefits. 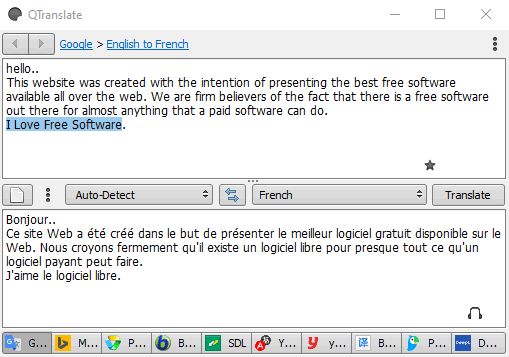 QTranslate (Homepage) is a very good Google Translate software for Windows. The feature that makes it more useful is you can translate text from Microsoft Translator, Babylon, Yandex, DeepL, Baidu, etc. All the translators can be used together because a separate tab on its interface is reserved for each translator.

Just enter the original text, select output language, and use Google Translate tab or any other tabs to see the translation. This software also brings a speech input feature which is helpful when you don’t want to type. Just speak the words and it will add those words on the input section. You can also listen to the input and output text. So, the features are good and the software is a good competitor to other Google Translate software.

Its separate review is also covered by us.